Edmonton residents claim Sobeys is violating their right to competitive prices and products in their burgeoning neighbourhood. The company says the community is 'well-served.' 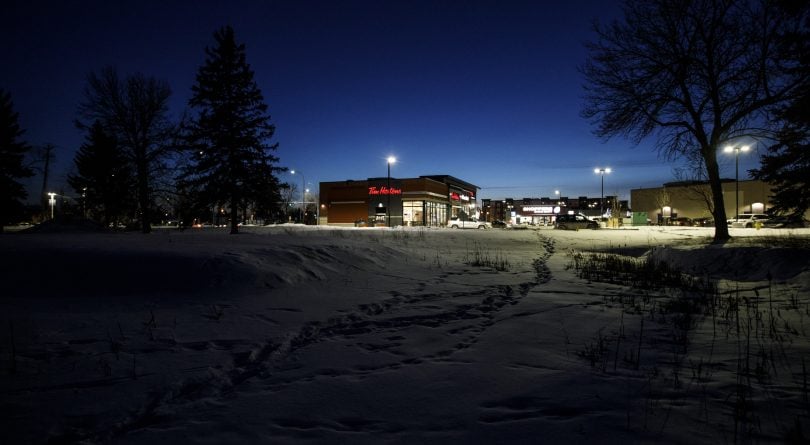 When a dog walks into the Bone & Biscuit Co., Kyle Sagan makes a point of kneeling to shake a paw with his furry customer. The family-run pet supply store just marked its ﬁrst year in Griesbach, a modern, walkable neighbourhood in north central Edmonton. The shop is a popular stop for pet owners who live nearby in a colourful mix of town homes, condos and single-family dwellings.

Most Edmontonians know this area as Griesbach Barracks, a 1950s-era army base in the middle of the suburbs. When the military went through a restructuring in the early 2000s, it sold Griesbach to Canada Lands Company, a Crown corporation that repurposes surplus government properties. As it has done with former bases like CFB Chilliwack and CFB Calgary, Canada Lands adopted an urban village model, redesigning the 250-hectare site to be a self-sustaining neighbourhood that, when complete, could provide housing and employment to as many as 13,000 people.

That promise is what attracted Erica Scott—a regular along with her mixed-breed rescue Stanley at Bone & Biscuit—to Griesbach four years ago. Eager to meet her new neighbours, she joined the local community league, a neighbourhood organization that puts on sledding parties, hosts kids’ used clothing sales and, from time to time, weighs in on local development issues.

Neither she nor the Griesbach Community League’s leaders, however, could have foreseen the kind of Manichaean struggle they’d soon take on. Earlier this year, they began urging residents to ﬁle complaints against the Sobeys supermarket chain to the federal competition bureau, the agency responsible for cracking down on anti-competitive business practices. The community league claims that Sobeys is abusing its position in the marketplace and violating people’s right to competitive prices and products. It’s a novel, last-ditch gambit they hope will force the company to sell a hotly contested section of land, clearing the way for the pedestrian-friendly high street many residents imagined.

At issue is a vacant lot on the southeast corner of Griesbach Square, the neighbourhood’s commercial hub. Located at one of north Edmonton’s busiest intersections, it’s a valuable piece of real estate that Sobeys purchased in May 2013 with plans to open a new location—kitty-corner to a competing Safeway. Within a month of submitting site plans to the city, though, Sobeys announced it was acquiring Safeway’s Canadian operations in a $5.8-billion takeover. With that, the company quietly shelved development of the Griesbach site. Residents suspect it did so to avoid pitting its own stores against each other—a charge Sobeys has neither conﬁrmed nor denied.

Disappointment turned to anger when residents realized that, as a condition of the sale, Sobeys had obtained from Canada Lands restrictive covenants on all the adjacent commercial properties within the 13 acres that make up Griesbach Square. These caveats, registered through the provincial land titles ofﬁce, limit the kinds of businesses that can operate near the unused lot: no butchers, no bakeries, no liquor stores, no florists. They’re common in land transactions involving grocery stores, but controversial because they typically have no time limit. Even if Sobeys were to sell, it would have no obligation to discharge the covenants. The city’s hands are tied, says Bev Esslinger, the councillor responsible for Griesbach, who supports the community league’s campaign: “I have no authority to do anything but advocate.”

RELATED: What happens when the demand for Alberta oil goes away?

To residents like Scott, the impact is already visible. Aside from Bone & Biscuit, she notes, there is one other store at the retail complex, along with a daycare, a dentist, a nail salon and nearly a dozen restaurants.

The restaurants aren’t exactly thriving. Pardeep Singh owns the Taste of Mediterranean in Griesbach Square, a fast-food chain that serves up falafels and pita sandwiches from its location facing into the commercial complex. When he opened six months ago, he expected that a bustling new common would bring foot trafﬁc. His business plan hinged on serving 65 customers a day; right now he’s lucky to get 25. “Summer is coming,” he says ruefully. “We hope it will pick up.”

Community league president Brad Tilley nurses higher hopes: that a competition bureau investigation will force the chain to either develop the lot or remove the covenants and sell to a buyer who will. At minimum, he hopes the action will spur Sobeys to take better care of the lot. As of late February, piles of snow-covered brush and garbage were visible among the trees. In summer, residents have reported ﬁres and, occasionally, found hypodermic needles in the grass.

Sobeys did not return phone calls or address speciﬁc questions by email. In a statement sent to Maclean’s and other news outlets, the company maintains that Griesbach residents are “well-served” by other supermarket options, including the Safeway across the street. (Scott scoffs: “You’re not going to send your kids to the store to get milk across eight lanes of trafﬁc.”) Sobeys will work with its property manager “to ensure the property is maintained,” the statement added.

To put it mildly, Canada’s grocery giants have taken lumps in the past for anti-competitive behaviour, both perceived and real. (Loblaw, for one, admitted last year that its employees had been ﬁxing the price of bread.) But few cases have been so starkly symbolic. So far, the league has collected more than 100 complaint forms and expects more before its annual general meeting in March. For now, it’s discouraging residents from boycotting Sobeys, but it hasn’t ruled that out as a future option.

For some, change can’t come soon enough. Despite working seven days a week with his wife to keep their franchise going, Sagan says the past year has taken its toll on Bone & Biscuit: “The next few months,” he says, “will determine whether or not we can stick around.”