Is the BoC wearing beer goggles?

As was unanimously expected, the Bank of Canada is keeping the key interest rate steady at one per cent, it announced today. Not much news there.

More interesting is the discrepancy between the Bank of Canada’s growth projections for late 2012 and early 2013 and almost everyone else’s. Here’s a chart that plots the BoC forecast—as of the October Monetary Policy Report—against those by TD, CIBC, ScotiaBank and BMO: 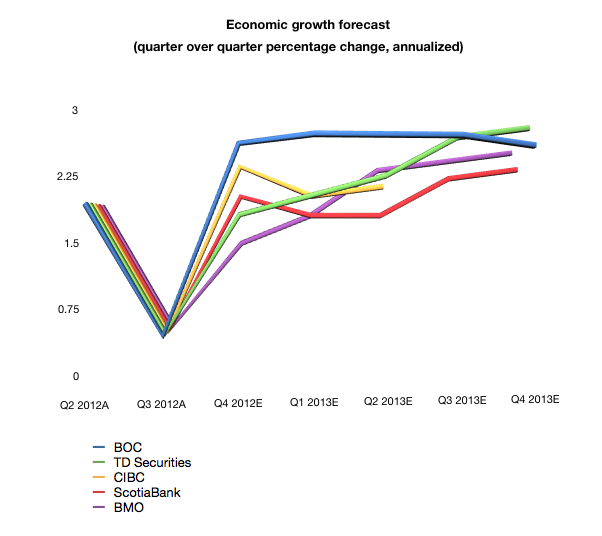 To be fair, RBC is even more bullish than the BOC. In general, though, the Bank’s projections for the next six months appear to be far more optimistic than the consensus.

The BOC is a well-known bull: it keeps insisting on reminding the market that borrowing costs won’t stay at rock bottom forever, even as other central banks are loath to do so right now. Still, a projected rate of growth of 2.5 per cent between October and December of this year seems exceedingly optimistic after the economy tanked to a dismal 0.6 per cent annualized growth between July and September.

What explains such sunny outlook? In all likelihood, the Bank’s latest forecast is already dated. The text of the interest rate announcement this morning seemed to hint that much when it noted that: “underlying momentum [in the economy] appears slightly softer than previously anticipated.”

The latest available projections from the Bank date back to October. That was before the U.S. presidential election, when most Canadian observers were dismissing the idea that the U.S. might tumble down the fiscal cliff with a confident shrug of the shoulders: “the Americans will sort it out,” was the consensus. A month later, that’s still the consensus—but the continued squabbling in Congress has raised eyebrows among analysts and continues to hold back business investment on both sides of the border.

The MPR was also before eurozone leaders and the IMF delayed granting Greece access to its next tranche of loan money—as if business confidence worldwide need that extra shakeup.

That the BOC’s October forecast already needs an update speaks to how difficult it has become for economists to read the future when the two key risks to the global economy (the eurozone crisis and the fiscal cliff) hinge on closed-door negotiations among politicians.

It’s really about politics, not economics—don’t ask what political scientists’ record is on crystal ball gazing…