A cutting-edge nano-material could melt away snow and ice from planes, if the technology can get off the ground 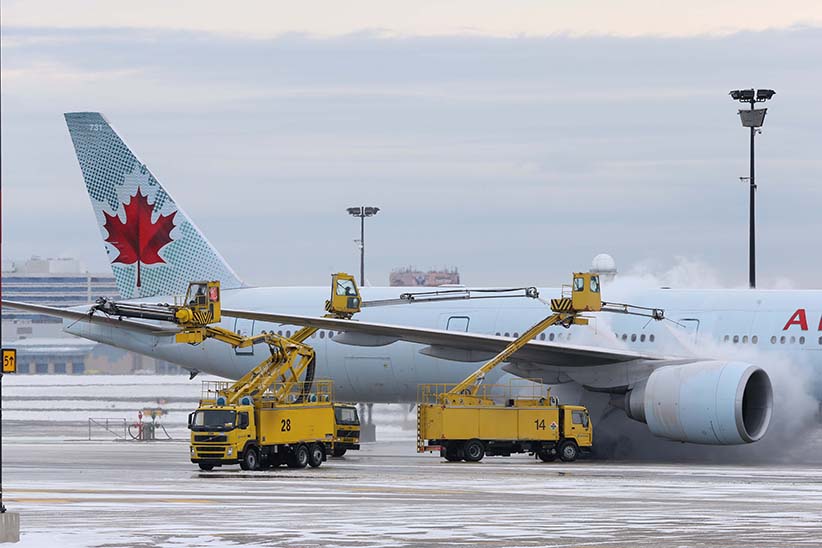 Air Canada planes get de-iced on the tarmac by crews at Pearson International Airport in Toronto. Toronto is back under a cold weather alert, causing yet more flight delays and travel havoc. January 20, 2014. (Rene Johnston/Toronto Star/Getty Images)

Frozen water and flying airplanes are a deadly mix. As ice builds up on wings and control surfaces, an aircraft becomes slower, heavier and easier for pilots to stall—so much so that NavCanada, the country’s air navigation services provider, likens an “iced” airplane to an “experimental” one because it fundamentally changes its aerodynamics. So the aviation industry has spent the better part of a century devising better ways to rid ice from aircraft—everything from redirecting hot bleed air from jet engines to equipping the leading edge of turboprop wings with inflatable rubber “boots.” Airports, meanwhile, spray millions of litres of glycol-based de-icing fluid on planes before they take off, a process that’s both expensive and time consuming.

But now researchers at Texas’s Rice University, led by James Tour, believe they’ve found a better way to keep planes ice-free. Tour’s team has devised a way to incorporate graphene, a so-called “nano-material” that’s the thinnest substance known to mankind, into aircraft parts to create a built-in de-icing mechanism—not unlike a car’s rear-window defrost system, minus the wires. “It would mitigate the need for spraying all these chemicals, which are going right into the environment,” says Tour. “You could just flip a switch and the ice would start dropping right off.”

Needless to say, such a system would be a boon for cold weather countries like Canada, where so much of our lives are seemingly spent battling snow and ice.

A quick primer on graphene: it’s a transparent layer of pure carbon just one atom thick, earning it the moniker “the world’s first 2D material.” It’s also 200 times stronger than an equivalent weight of steel and a great conductor of electricity. Though scientists had long known about its existence, it wasn’t until 2004 that researchers at the University of Manchester managed to extract it from graphite, sparking an initial flurry of excitement about its potential uses—everything from better batteries to more targeted drugs. Sports giant Head even incorporated the material in a line of tennis racquets used by world No. 1 player Novak Djokovic, though Tour says the nano-material functions mainly as a marketing tool in such applications.

Tour’s team, by contrast, figured out a way to carve graphene ribbons from tubes of carbon atoms. The ribbons are then arranged in a net, making it possible to cover a large surface area with a relatively tiny amount of graphene. Once hooked up to a power source, the ultra-thin graphene layer—effectively a transparent coating—can be electrified, with all of those little overlapping ribbons serving as miniature resistors. “They act as little heaters,” says Tour, adding that the discovery caught the attention of U.S. defence giant Lockheed Martin, which was looking for a way to keep ice from forming on radar domes without interfering with signals.

The next step was applying the concept to aircraft. Tour’s group worked with Carson Helicopters to find way to prevent ice from forming on the nickel shields used to protect a helicopter’s composite blades from abrasion (helicopters, it turns out, kick up so much dust and sand when they land and take off, they’re at risk of grinding away the very airfoils that keep them airborne). Tour’s lab mixed the graphene ribbons into an epoxy that was used to help hold the shield in place.

Tour says an entire airplane could conceivably be built with a graphene-based de-icing system baked right into its various components—even the windows and windshields—helping to save airlines millions. At Toronto Pearson International Airport, for example, ground crews spray roughly six million litres of glycol-based de-icing fluid on aircraft in a typical year, with each plane taking between two and 19 minutes to de-ice, depending on the severity of the build-up. That’s time that could be spent in the air, flying passengers to their destinations.

Nor is it just airlines and their passengers that stand to benefit. Tour says a similar system could be applied to overhead power lines that ice up during winter storms and topple over, cutting electricity to homes. Auto companies could also use graphene to build cars with windshields and other parts that shed snow and ice by drawing on their batteries, all but eliminating the need for snow brushes and window scrapers.

Of course, it’s one thing to develop a novel new application in the laboratory. It’s quite another to develop a commercial product that can be rolled out across entire industries—particularly ones as heavily regulated as aerospace and automobiles. “Somebody is going to have to pick this up and take the next step,” says Tour. “It’s the process that’s going to cost money—not the materials.” He adds, however, that Lockheed Martin crunched the numbers for installing a radome de-icing system on U.S. warships equipped with the Aegis weapons system and everything checked out. “This is a really important technology,” he says. “A lot of problems could be solved with this.”