In an Alberta city used to the crests and troughs of the gas industry, Bitcoin mining looks stable by comparison 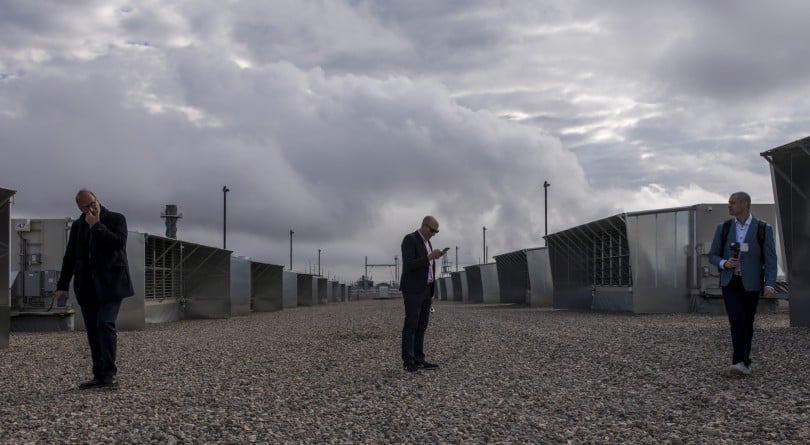 The Hut 8 Bitcoin mine in Medicine Hat, Alta., is part of the city’s push to diversify its economy away from the energy industry it’s long relied on. (Guillaume Nolet)

The area around Medicine Hat, a city in southeast Alberta known for its natural gas reserves, was described as having “all hell for a basement” by the writer Rudyard Kipling after his visit in 1907. “And the only trap door appears to be in Medicine Hat,” he continued. “And don’t you ever think of changing the name of your town. It’s all your own and the only hat of its kind on Earth.” Over the years, many searching for opportunity ended up in the region to ride its booms and busts, looking to capitalize on a resource that has served the city well. But recently, it’s become known for a different sort of boom: the kind that creates Bitcoin.

The Bitcoin mine sits on the outskirts of Medicine Hat and looks like a ﬁeld of landlocked shipping containers arranged in neat rows, each giving off a buzzing noise that requires earplugs up close. It’s the relentless sound of thousands of tiny fans cooling thousands of small computers, expelling air so warm it can make the space between boxes shimmer like air near the engine of a plane. Hut 8 Mining and its partner Bitfury opened the mine earlier this year; it’s the largest operation of its kind in Canada and their second site in Alberta—the other is 250 km northwest in Drumheller.

READ MORE: Canada is plagued by Bitcoin ransoms—and there’s no help in sight

Brian Cave’s curiosity was sparked after reading an article in the local newspaper informing residents that a cryptocurrency company was about to move in. He didn’t know much about Bitcoin—a decentralized, digital currency that’s separate from any government or bank—but decided to send in his resumé. Like others in this part of the country, he’s worked in gas and elsewhere in the energy sector. At the time, he was an electrician for the city and was fascinated by the project’s electrical demands. “How could it need that much power?” he wondered before eventually landing one of the 40 jobs offered to locals by the mine.

The mine consumes roughly 63 megawatts of electricity at any given time—the red and green lights on each server blink non-stop—which on a cool day in September is nearly as much as the entire city of Medicine Hat, population 63,000. “This is the future,” one worker declares on site.

Cryptocurrencies like Bitcoin rely on mining to secure transactions. “Mining” in this context does not mean digging for minerals, but using computers to add groups of Bitcoin transaction records, known as blocks, to a ledger shared by computers around the world, or a blockchain. The machines race to secure each block by identifying a digital fingerprint of the data in it. Mining has moved from small garages with a few computers to large-scale enterprises, and the people who do this work, in accordance with the vision of Bitcoin’s unknown founder, are rewarded with 12.5 newly created Bitcoins for each block secured.

While China leads the way in cryptocurrency mining, some miners have found a home in Canada’s small towns and cities. Alberta offered Hut 8 ideal conditions: cold weather (which provides protection against the computers overheating) and cheap electricity. “We can get really cheap power in Venezuela, we can get really cheap coal-based power in Kazakhstan or Romania, but the fact that you can get good stable government in Canada makes it a great combination,” says Andrew Kiguel, the company’s co-founder and CEO. So far, the company says it’s mined more than 3,500 Bitcoins in the province; the currency’s value fluctuates daily, but at the time of this writing, one Bitcoin was worth nearly $9,000.

Hut 8’s 4.5-hectare farm is powered by Medicine Hat’s grid, which is largely powered by natural gas, on a 10-year contract. “I’m in the business of making electricity and selling it to industrial users,” says Ted Clugston, the city’s mayor, adding that the city itself has not invested in Bitcoin. In his mind, the new industry in town is “mining for ones and zeros” by turning “gas into electricity, which is being turned into Bitcoins.” When gas prices crashed about a decade ago, Clugston estimates that roughly 2,000 locals lost their jobs. So the Bitcoin mine became part of the city’s diversification efforts; a cannabis operation the size of 21 football fields is currently under construction next door. “We have every blockchain company in the world knocking on our door,” he says, adding that the city has the right to limit the mine’s energy usage during summer heat waves.

Signs of the company’s presence can be seen all over the city, and in Drumheller, which is also home to the “world’s largest dinosaur.” Hut 8 sponsors the junior hockey teams in both locales and plans to donate $20,000 in scholarships to Medicine Hat College. For Cave, switching jobs meant being able to stay in one place while avoiding the precarious gas industry; 70 per cent of the company’s staff in Drumheller come from oil and gas, folks who’d otherwise be waiting for the next boom. “The other jobs I’ve had involved a lot of travelling,” Cave says, “whereas here you’re in one spot.” Cave moved to the city from Saskatchewan to be closer to his triplet granddaughters.

When he was hired in May as an electrician, he asked to be paid in Bitcoins but was told that Canada forbids employees from being compensated in cryptocurrency. He had to settle for traditional money, regulated by the government and other institutions. So Cave doesn’t own any cryptocurrency coins yet, but he’s already thinking about getting in on this latest boom: “I’m meeting next week with the fella that advises me on investments,” he says. “I’ll run it by him.”