Memo to the Conservatives on climate policy: 'Take the money, dammit!' 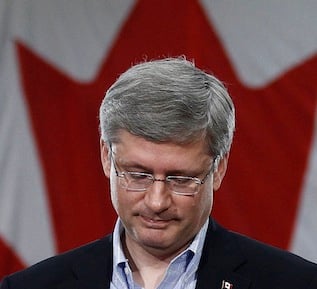 Maclean’s Aaron Wherry has been documenting the Conservatives’ remarkable sophistry when it comes to carbon taxes and climate change policy (most recently here). As far as I can tell, the Conservatives’ position is the following:

The first line is largely correct. It’s the second one that makes no sense. The Conservatives’ rabid demonisation of the phrase “carbon tax” has obscured a point that should be better-known: as bad as you may think a carbon tax (or cap-and-trade) may be, the Conservatives’ regulation-based approach is worse. Regulations introduce large deadweight losses: costs that are not offset by benefits elsewhere. The advantage of market-based approaches is that they transform some of those losses into cash. The Conservatives’ reliance on regulation over markets means that they are leaving free money on the table, for no better reason than because they are afraid to be seen taking it.

This post is somewhat wonkish, but it’s important to set out in detail just why the Conservatives’ stance is so foolish.

First, some definitions based on the idea of economic surplus:

The graph above is incomplete if there are externalities, that is, if there are costs (or benefits) that are not attributed either to consumers or producers. If there are negative externalities—pollution is a common example—too much is being produced, and governments should intervene to reduce the quantities produced and sold.

Regulations essentially have the same effect of a technical setback: they oblige suppliers to undertake practices that increase the cost of production. This has the effect of shifting the supply curve up: Faced with higher costs, producers are going to raise the minimum price they’ll accept for any given quantity produced. This upward shift increases prices and reduces quantities produced, which is of course the policy goal. It also affects the producer and consumer surplus:

The increase in prices from P to P’ and the decrease in quantities from Q to Q’ clearly make consumers worse off: the size of the consumer surplus triangle in this graph is smaller than in the graph with no regulations. Part of the lost consumer surplus is transformed into producer surplus: producers benefit from the higher prices. But part of the producers surplus is dissipated by the higher costs of production. (In this graph, it looks as though overall producer surplus has decreased, but it’s possible to change the slopes of the lines and create an example where producer surplus actually increases.)

Suppose now that instead of regulations, the government imposes a tax on the sale of the good. This also shifts up the supply curve, as producers will now require prices that offset the extra cost of the tax. The difference here is that government revenues are now introduced into the graph:

The reduction in consumer surplus is the same as in the regulations case; the effects on prices and quantities are the same. And the change in producer surplus is unambiguously negative: producers lose from the lower net-of-tax price and reduced quantities.

There is one important difference, though: some of the lost economic surplus is transformed into tax revenues, the black rectangle whose area is equal to the tax times the quantity sold. There is still some deadweight loss, but the green triangle is clearly smaller than the green trapezoid shown in the regulations case.

There is no way to eliminate all the costs associated from an effective policy for reducing greenhouse gas emissions. The reason why economists overwhelmingly prefer market-based mechanisms is that they reduce these costs to a minimum, and they also provide the government with revenues that can be used to compensate people for those losses and/or to advance other policy goals.

The regulatory approach preferred by the Conservatives is more—not less—costly because it doesn’t generate tax revenues. By refusing to adopt a market-based strategy to deal with climate change, we get the worst of both worlds: all the loss in economic surplus and none of the offsetting public revenue.

(P.S. There’s another important reason why market-based approaches are better than regulations—it will be the subject of my next post.)