The new Tim Hortons lid is a huge improvement. Really.

Customer reviews thus far diverge wildly, from glowing declarations of thanks to desperate pleas for a return to the old lid but an expert is solidly in favour 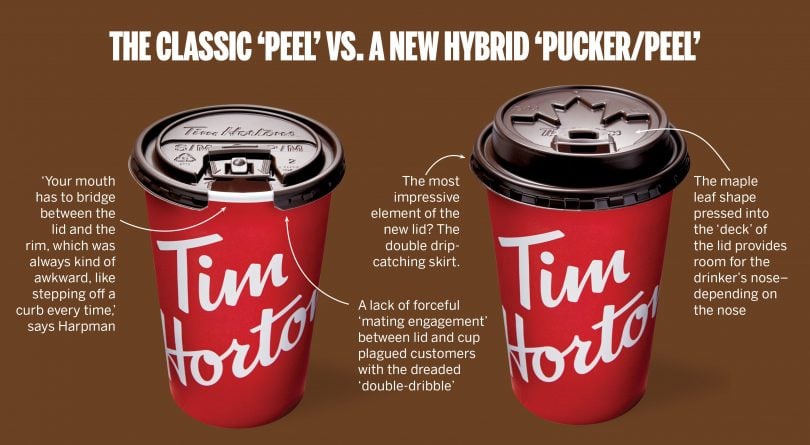 It’s only summer, but it’s already been a buzzy year of peaks and crashes for Tim Hortons. In March, the country’s largest coffee chain launched a loyalty program; in April, lacklustre sales prompted president Alex Macedo to admit that its once-exciting Roll Up the Rim promotion had “gotten old”; and now, after 25 years of customer complaints of the so-called “double-dribble” onto their ﬁngers, Tim Hortons’ new and improved lids have landed in the hands of the nation’s jittery coffee ﬁends.

“We took more than two years to develop the new lid,” said Macedo in a glowing press release, “conducting 12 research studies, serving over 30 million beverages and working with thousands of guests to help us design it.” The result, the company says, is an improved lid that reduces both spills and Tims’ carbon footprint by utilizing polypropylene, a 100 per cent recyclable plastic that the company says every franchise will happily collect for recycling.

But what do customers think? Reviews thus far diverge wildly, from glowing declarations of thanks to desperate pleas for a return to the old lid. In an age of “smart” lids that change colour to warn of dangerously high temperatures, spill-proof spin-tops you can hold upside down without losing a drop and double-insulated vacuum-sealed stainless steel tumblers, can the long-awaited redesigned Canadian takeaway lid possibly stack up?

If anyone can answer this question, it is Louise Harpman, a professor of architecture and design at New York University. She’s also the owner of the world’s largest collection of disposable beverage lids—some 500, including samples of the new Tims lids sent by Maclean’s. Specimens from the collection have landed at the Smithsonian and Museum of Modern Art, and are featured in Harpman’s book, Coffee Lids: Peel, Pinch, Pucker, Puncture. (She also collects vintage light bulbs, and moulds for balloons and buttons.)

On the pages of her book, and in conversation, Harpman reveals how a seemingly simple product like a coffee cup lid can have a rich history of design. Since the original 1950 patent—by James D. Reifsnyder of the Lily-Tulip Cup Corporation from Flushing, N.Y.—lids have morphed from basic to innovative to artistic. Tims’ old lid was basic at best, she says, and though customers don’t know lid lingo, their complaints were well-founded. “The way the lid sits on the cup is called ‘mating engagement’—which is the lock between the lid and the cup,” says Harpman. It’s an odd descriptor, but the mating engagement must be sufﬁciently forceful, which it was not on the double-dribble lid. “This is why the original Tim Hortons lid leaked,” she says. “It didn’t have a forceful enough mating engagement.”

The old lid is what Harpman calls a “peel” lid, an unpopular design among aﬁcionados. “Your mouth has to bridge between the lid and the rim, which was always kind of awkward, like stepping off a curb every time,” she says. Other categories include the pinch, pucker and puncture—but Tims’ new lid doesn’t quite ﬁt into any of them. “It’s like a pucker, where you place your mouth around a preformed aperture and tip the cup back to drink, but it also has a little peel-and-lock closure,” says Harpman. “We might have to invent a new category.”

READ: The Tim Hortons brand is badly broken. Here’s how to fix it.

Still more impressive to Harpman is the new lid’s “skirt,” which should flare out to catch drips instead of running parallel to the cup like the old lid. “Look closely,” she marvels, “the skirt flares out but then it flares out again. Two skirts! In my mind, that’s the key innovation here.” She also loves the Canadian leaf pressed into the top (technically, the “deck”) for reasons artistic and pragmatic. “It’s not unusual to see a company logo, but to me the maple leaf encompasses the whole country,” she says. “Also it makes room so your nose doesn’t smush. That’s just fantastic.”

Not everyone is so psyched. The lid’s big premiere overlapped closely with Justin Trudeau’s announcement of an upcoming single-use plastic ban, highlighting a much graver problem than coffee drip. “Tim Hortons has known for a long time that they need to do something about their waste problem,” says Sarah King, head of Greenpeace Canada’s oceans and plastics campaign. Polypropylene is “theoretically recyclable, but that does not mean they will be recycled,” she says. In fact, Greenpeace’s brand audits found Tim Hortons to be the second-most-polluting corporation in the country (the worst offender: Nestlé).

To King, Tims missed an opportunity to launch a mug-share program—which they will probably have to do in the event of the 2021 single-use plastic ban anyhow. (The company currently sells travel mugs and offers discounts for those who use travel mugs.) Even Harpman, the world’s biggest lid fan, agrees: “We’ve probably hit peak plastic lid.” She suggests Tim Hortons look next to compostable lids or even edible ones. “Imagine that? The steam from the coffee warms a thin cookie lid, and then you eat it.”

This article appears in print in the August 2019 issue of Maclean’s magazine with the headline, “Drip dried by design.” Subscribe to the monthly print magazine here.