Nutella is having its 'bacon moment'

Why the chocolatey-nut concoction is suddenly everywhere. 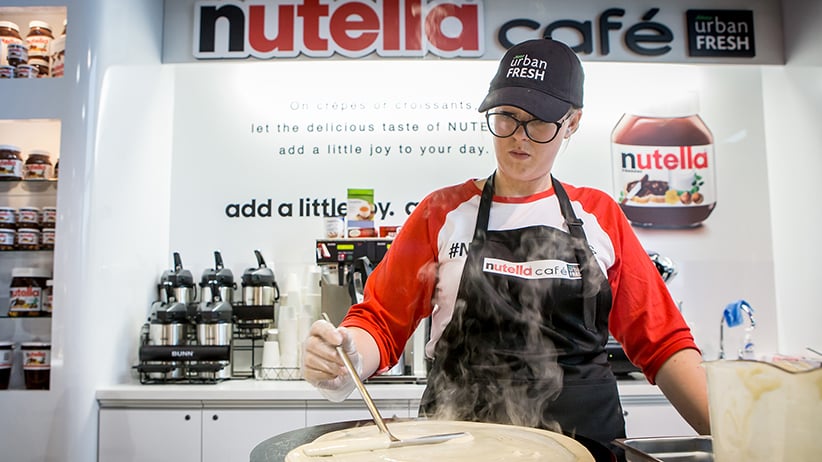 The horizon is brown at the Sobeys Nutella Café, which opened last week in Toronto. The debut looks like an edible book launch, featuring jars upon jars for buying or sampling, and fans queuing to have their tastebuds signed by the addictive chocolate-hazelnut spread. Crepes, doughnuts and a dozen other pastries serve as vehicles for the Nutella. The seven-letter brand name appears ad infinitum.

Nutella is not new to Canada. It has been available here for nearly half a century, and is churned out in a factory in Brantford, Ont., by its Italian parent, Ferrero. However, Nutella is having what might be described as its “bacon moment”—part choreographed marketing push, part cultural moment. As with bacon, which in recent years inspired a multitude of new food creations, like bacon doughnuts, bacon-infused vodka and baconnaise, suddenly the chocolatey-nut concoction is everywhere. This past summer Tim Hortons achieved a marketing coup when it sold Nutella puffs alongside Timbits and offered it as an alternative to cream cheese on bagels, while Hilton hotels tout Nutella muffins in their continental breakfast array, and artisanal chefs serve Nutella gelato à la carte. Not coincidentally, some have determined that Nutella and bacon go well together. For instance, on fried dough.

Last year Ferrero sold 180 million kg of Nutella in 160 countries. Little wonder then that rivals like Kraft and Hershey have both joined the chocolate spread arms race with their own versions.

Central to Nutella’s popularity, aside from it being chocolate you can spread on bread, is the popular belief that the stuff is nutritious. “If you want to go healthy, you have to go to Nutella,” says Alessandro Fonseca, who runs a pizza shop in Vancouver and specializes in a Nutella and cheese pizza. “There are people who order a full one–two feet long–for parties,” he says. “It’s not like eating a scone or muffin or cake full of butter. If you eat it in the morning or for lunch, you have energy all day.” Other Nutella fans share that view, at least partially. “Nutella is an essential food group,” jokes Annika Gnann, a 21-year-old Nutella fanatic in Halifax. “For me, it’s childhood memories. I love when I spread the cold Nutella on a pretzel bun and put thin slices of apple on top. Nutella in the morning is the best, as long as you don’t just eat an entire jar or just spoon it right out.”

However, while the Nutella Café features the spread as a breakfast item and teatime snack, Nutella has more sugar and calories than chocolate frosting (even Betty Crocker’s Rich and Creamy type). It also has more than double the calories than Kraft Cheez Whiz, and, as CBC Marketplace found, a tablespoon of Nutella contains a tablespoon of sugar—the other ingredients are sparse enough to fit in the tiny spaces between the sugar grains on a spoon. With bread, Nutella is icing; with fruit, it’s cold fondue.

The love for the brand is not simply a result of wilful blindness to nutrition labels. Ferrero advertises Nutella at once as part of a “traditional Italian breakfast” and an irresistible snack or dessert. The ads range from Nutella for the au naturel—with it featured in the hands of a vegetable gardener, spread on a rice cake or drizzled on oatmeal, often with a watermelon or other piece of fruit in the foreground—to Nutella for the splurging sweet tooth. Nutella trucks tour the country, offering customizable jars and photo shoots with children half the size of the Nutella tub next to them. In 2005, Ferrero won a Guinness World Record for hosting the largest continental breakfast, with more than 27,000 attendants celebrating Nutella’s 40th birthday in Germany.

While Nutella is seen today as healthy and luxurious compared to chocolate icing or peanut butter, it was created during the Second World War as a sweet and cheap product that integrated hazelnuts to save on expensive chocolate. In fact, the marketing of Nutella as part of a healthy and upscale breakfast has come under fire. In 2010 a California mother sued Ferrero after realizing the product, which she had fed her toddler, contained a “dangerous amount of sugar.” Her case became a class action suit, which was settled with Ferrero agreeing to repay US$3 million to consumers across the U.S., the equivalent of about $4 per jar. Despite the settlement, Ferrero’s seemingly contradictory messaging continues. The spread is simultaneously positioned as a breakfast staple and decadent treat—one ad slogan reads: “hard to resist, isn’t it?”

To truly understand the root of the mania, however, it helps to understand the biology at play. The contents of Nutella stimulate three of the five types of human taste receptors—sweet, bitter, and umami (savoury). Lathered on a salted cracker, it engages a fourth receptor, with only the sour receptors excluded. “The thing with Nutella is it’s a fine-tuned formulation,” says Prashen Chelikani, an oral biologist at the University of Manitoba. Chelikani estimates that the recipe’s cocoa powder stimulates the bitter receptors by around 10 per cent, just enough to appeal to adult tastebuds while not enough to turn away children. It’s a similar taste combination as Oreos and milk, and because of the branding, it’s easier to justify for breakfast.

Perhaps the most telling element of Nutella’s marketing campaign is the name of its new snack pack, “Nutella and go,” which turns the brand’s name into a verb. When you Nutella, you never go back.