A profile of Canada's entrepreneurs

Welcome to our special report on small business

Following the worst financial collapse since the Great Depression, an increasing number of Canadians have taken control of their earning potential and become their own bosses. But unlike past recoveries, more Canadians are choosing self-employment, rather than turning into entrepreneurs as a means of escaping unemployment.

Roughly 80 per cent of startup owners have voluntarily left the cubicle and are pouring their energies into their own businesses, a much higher figure than those seen during the jobless recoveries of the 1990s and 2000s, writes economist Benjamin Tal in a recent CIBC report. As of June, the report says that more than half a million Canadians were in the process of setting up their own companies. And those numbers could be trending upwards for the foreseeable future.

“Irreversible structural forces suggest that the next decade might see the strongest start-up activity in the Canadian economy on record,” Tal writes.

So what does today’s Canadian entrepreneur look like? And what trends are changing the landscape of Canada’s small business community?

Perhaps it comes as no surprise that Western Canada is home to the country’s hottest startup activity. The report notes that British Columbia leads the country with 3.7 per cent of its working population owning a startup, defined as a business under two years of age. Alberta and Saskatchewan follow in second and third positions, respectively.

“We definitely have a very entrepreneurial spirit here in Calgary and Alberta,” says Ben Brunnen, chief economist with the Calgary Chamber of Commerce. Private sector investment in Alberta’s oilsands, says Brunnen, has trickled all the way down to the small guys, benefitting a number of tiny enterprises that provide services to the multinationals.

“That creates a can-do type of attitude where it just encourages Albertans to take advantage and take control of their own destiny,” he says.

Count on “baby boomers” to reinvent their careers, as well. Canadians over the age of 50 are the fastest growing segment of the startup population, owning nearly 30 per cent of new businesses, says Tal’s report. That’s more than double their share of startup activity at points in the 1990s.

In B.C., there’s been an undeniable rise in “seniorpreneurs,” says John Winter, president and CEO of the B.C. Chamber of Commerce. Consider that between October 2008 and October 2009, Statistics Canada found a net increase of 110,000 self-employed individuals over the age of 55. “This is a phenomenon that we’ve not witnessed before,” says Winter.

Don’t forget about Gen Y either. In the past five years, Canadians in their twenties have increased their startup ownership by nearly 10 per cent, says CIBC. Becky Reuber, a professor at the Rotman School of Management, believes that modern business icons have inspired some Gen Y members.

“They know that Mark Zuckerberg founded Facebook. They understand what Steve Jobs did with Apple,” she says. “It’s the entrepreneur that’s the hero for these times and for this generation.”

In the coming decade, immigrant entrepreneurs will continue to play a crucial role in the small business community. StatsCan reports that nearly 20 per cent of immigrants were self-employed by the end of the 2000s, compared with 15 per cent for their Canadian-born counterparts.

Meanwhile, Industry Canada says that high-growth firms can be found in every sector. That said, the professional services and construction sectors have shown the greatest employee growth.

But despite these bright developments, when it comes to small business, the male/female split is hardly balanced. In 2010, Industry Canada estimated that only 17 per cent of small businesses were majority-owned by women. According to StatsCan, self-employment among women grew by 23 per cent between 2001 and 2011, compared with only14 per cent for men. But, as of last year, women still accounted for only about one-third of the self-employed workforce in Canada.

And of course, there’s one daunting stat confronted by every hopeful entrepreneur: survival rates. Industry Canada says that only 51 per cent of businesses will make it to their fifth birthday.

Still, with so many Canadians embracing entrepreneurship, there’s room for optimism.

A portrait of the Canadian as an entrepreneur: 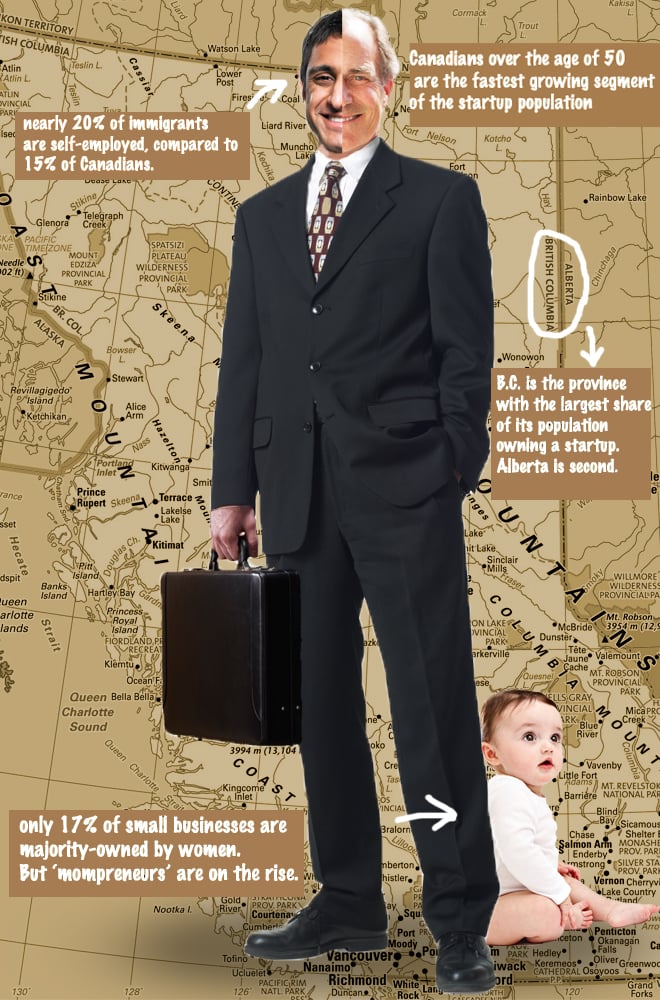