Out of this world prices 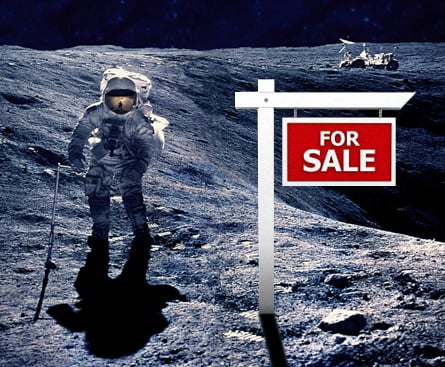 Until the movie Moon hit theatres this month, few people had ever heard of Helium 3. In the flick, which stars Sam Rockwell as a lonely miner toiling on the lunar surface, the substance has solved all the world’s energy woes once and for all. But if Hollywood has a sleeper hit on its hands with Moon, those in the business of selling lunar real estate are hoping to cash in themselves. “Any time there’s any mention of the moon, Mars, or Venus, we get hits and it goes up,” says Dennis Hope, a Nevada entrepreneur who claims to have sold US$10.1 million in lunar acreages over the years. “Hopefully it’ll be the same with this movie.”

People have been laying claim to the moon for decades, but none have done it with the same veracity, or generated as much publicity, as Hope. Back in 1980 the former shoe salesman says he spotted a loophole in the 1967 UN Outer Space Treaty, which bars any government from claiming extraterrestrial bodies for itself. But the treaty said nothing about individuals, so he established the Lunar Embassy in the mid-1990s, claimed the moon for himself, and began selling property. Prices start at $19.99, plus $1.50 lunar tax. “It’s cheap,” he says. “There could be as much as 20 ounces of Helium 3 on your land. That’s $2.5 million worth. Of course you have to get there to get it.”

As whacky as Hope’s scheme is, the idea of mining the moon to power the earth is grounded in real world theory. Some scientists have long believed Helium 3 could be used to power a new generation of nuclear fusion reactors. The problem is developing such technology is not only hugely complicated, Helium 3 is also extremely rare on earth. The moon, on the other hand, has loads of the stuff. Gerald Kulcinski, a researcher at the University of Wisconsin’s Fusion Technology Institute, believes the moon holds one million metric tons of Helium 3 in its crust. He estimates just 40 tons could power the entire United States for a year. Others are thinking the same way. Ouyang Ziyuan, the chief scientist with China’s lunar exploration program, has openly advocated mining Helium 3 on the moon as a solution to China’s energy woes. “Each year three space shuttle missions could bring enough fuel for all human beings across the world,” he told China Daily in 2006. China has plans for an unmanned mission in 2017 to collect lunar soil.

Never mind that moon bases and fusion reactors are still decades away from becoming reality, a cottage industry of lunar realtors has sprung up on the Web, catering to would be Helium 3 prospectors and those looking for the ultimate getaway. At least half a dozen sites now flog lunar property. Legal experts say claims to ownership of land on the moon are ludicrous at best. “People like Dennis Hope have no legitimate basis whatsoever for what they are doing,” Virgiliu Pop, a member of the International Institute of Space Law, has said. “If states cannot appropriate extraterrestrial realms, neither can their nationals.” And Hope has faced very earthy setbacks along the way. In 2004, Lisa Fulkerson, the former “Canadian ambassador” for the Lunar Embassy, who’d sold more than $400,000 worth of supposed moon property, was sentenced to two years in prison for fraud over a complex check-writing scam.

Undeterred, Hope continues to sell land on the moon. In 2001, he formed the Galactic Government, becoming the interim president, and applied to the International Monetary Fund to be officially recognized as an independent nation. The IMF turned him down last November, he says. Still, he’s hopeful. “I think in the next five months the U.S. government will recognize us as a sovereign nation.”

Maybe he’ll have better luck there. According to Hope, the Galactic Government currency, the Delta, is backed by US$3 quadrillion worth of Helium 3 reserves. He just sent a letter to President Barack Obama offering US$125 trillion worth of Deltas over 15 years to bail out the United States. “A lot of people think I got into this to be greedy and make money,” he says. “This is an ideological challenge that I’ve set up. Our intent is to help financially suffering governments on this planet.”