Green power for the people

Six top green technologies being developed in Canada and abroad

A future in which energy is cheap, plentiful and green hinges on technologies. Here are six promising innovations now being developed in Canada and abroad: 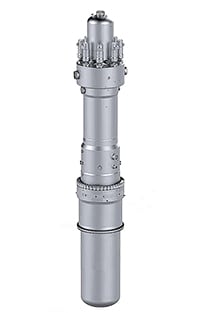 How it works: A self-contained cylindrical unit, equipped with a nuclear core and steam turbine, provides power on a four-year cycle without refuelling.

Why it’s a game changer: The smaller size makes it more flexible, easy to manufacture and cheaper than a traditional plant. The mini-reactors, which are capable of 180 megawatts but can be aggregated to generate more power, are ideal for industrial and mining sites.

Status: The U.S. government has invested in the company to develop a reactor by 2021.

2. Airborne Wind Turbine: A tethered wing fitted with wind turbines, which resemble propellers, flies like a kite. Developed by Makani, in Alameda, Calif., it generates wind power while flying at an altitude of 250 to 600 m.

How it works: The wing of an Air Wind Turbine works much like a conventional turbine blade; it travels in a circle while mounted rotors spin in the wind and produce electricity.

Why it’s a game changer: According to Makani, flying at high altitudes creates access to stronger and more consistent wind, making it cheaper to produce power. It also opens up more offshore areas for power production.

Status: This month, Makani, which was recently acquired by Google, deployed its first fully autonomous kite-powered system. It can generate 30 kilowatts of power, about enough to power three conventional ovens. The plan is to build models that can produce 20 times that.

Cost: So far, Google has poured at least $15 million into the start-up.

How it works: Energy is recovered every time the brakes are used or the car decelerates. A hydraulic pump uses the energy to compress nitrogen in a steel tank, which is unleashed when a driver accelerates, propelling a hydraulic motor. Because the system can’t produce a lot of energy, there is also a gas engine.

Why it’s a game changer: Because it doesn’t use a battery to drive the motor, the Hybrid Air will be cheaper than electric hybrids such as the Toyota Prius. In terms of fuel efficiency, the Hybrid Air can go about 34 km on one litre of fuel. Peugeot says it will result in overall fuel savings of 35 per cent.

Status: Peugeot debuted the car at the Geneva Motor Show this month and expects it to hit the market by 2016.

4. Marmora Pumped Storage: A simulated waterfall five times the height of Niagara Falls will be used to store and generate electricity.

How it works: Surplus electricity drawn from Ontario’s grid will be used to pump water from a lower reservoir (a former mining pit in Marmora, Ont.) to an upper reservoir, which acts as a giant battery. When the power is needed, the water will fall back down into the lower reservoir, passing through generators. It will be able to supply 400 MW of electricity at a time—enough to power 40,000 homes.

Why it’s a game changer: It would be the largest pumped storage plant of its kind in Canada and the first to repurpose an old mining site. John Wright, executive director of business development for the company behind the project, Northland Power, says it will also bring jobs and tourism to Marmora. “It’s sort of a dream project.”

Status: Northland is currently awaiting a contract from the provincial government. If that falls into place, it will take another year and a half to secure necessary permits plus four years of construction.

Why it’s a game changer: Typically, air-energy storage takes place in empty gas wells or salt caverns; using water means most cities will have easy access to a storage site. According to Curtis VanWalleghem, CEO of Hydrostor, it’s also cheaper than storing energy with traditional batteries and allows for more flexibility when dealing with renewable energy sources. “You never know when the wind is going to be blowing and the sun is going to be shining,” he says.

Status: An underwater system will be up and running in Lake Ontario, seven kilometres from the shore of Toronto, in early 2014.

Cost: A few million dollars, says VanWalleghem, but the cost has been offset by federal and provincial grants.

How it works: In a tornado, hot air flows from a high temperature at the bottom of the atmosphere to a lower temperature in the upper atmosphere. By producing a vortex and adding turbines, it’s possible to convert part of the heat transfer into energy.

Why it’s a game changer: It’s powerful. “If this process were successful, it could produce all the electricity we need . . . more electricity than nuclear power, more than oil sands,” says engineer Louis Michaud, who is spearheading the project. At an estimated three cents per kilowatt-hour, it’s also a cheap method of harnessing energy.

Status: A small, prototype tornado about 40 m high is currently under construction at Sarnia’s Lambton College, and is expected to be completed in June. A larger version would be 10 to 12 km high.