Richardson International has customers in 60 countries and a $30-million project underway in Winnipeg. A little trouble from China won’t faze it. 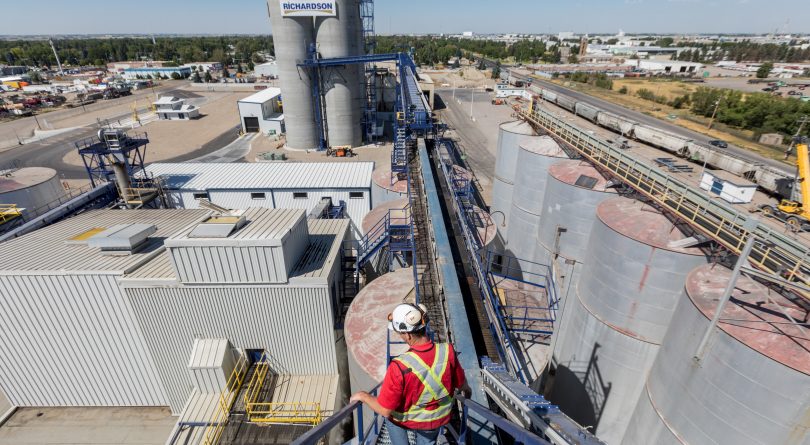 From the window of his 28th-floor office in downtown Winnipeg, Craig Sheldon can clearly see the future of Canada’s largest agribusiness. “Right now, it’s just a construction site,” says the executive vice-president of Richardson International.

But the company’s employees—and, indeed, all of Winnipeg—know what will occupy that spot in the near future. The 160-year-old farming company is constructing a 62,000-square-foot, $30-million food innovation centre.

Resembling a stack of glass building blocks, the four-storey facility will be home to a team of researchers and food scientists charged with turning the oldest and most basic of Canadian crops—wheat, barley, peas and oats, among others—into the newest cutting-edge plant-based foods.

It’s a big, brave and much-anticipated move for a company that was building grain elevators in Prairie communities even before the railroads arrived, in some cases. By embracing innovation while building a global team, Richardson has earned its place as one of Canada’s Best Managed Companies, as recognized by Deloitte.

Up until just two decades ago, Richardson—which is still owned by the original family, albeit now in its sixth generation—was mostly a grain-handling company. They’d sell seeds, fertilizer and crop-protection products to farmers, who would in turn sell their crops back to Richardson. “That business is 15 times the size it was 20 years ago,” explains Sheldon.

The intervening years have seen profits reinvested into infrastructure and expansion. Richardson entered the canola crushing business in 1999, promptly becoming one of the top crushers in the world. Five years ago, the firm entered the American market via the oatmeal processing space, making cereal and granola bars in a mill in Nebraska. Just a year and a half ago, Richardson made its first acquisition overseas—a factory outside of London. Overall, Richardson now has 110 locations buying and selling with thousands of farmers—and then selling their harvests to customers in 60 countries.

Operating across the globe has its challenges. China recently revoked Richardson’s permit to import Canadian canola. Government officials claimed to have found pests in some shipments, but the move came amid escalating tensions related to Canada’s arrest of the chief financial officer of Huawei, the Chinese telecom giant. Richardson’s president Curt Vossen is scheduled to meet with the Prime Minister to try to rectify the situation, though in the meantime, the company is not fazed. “We deal with trade issues all the time, and we try to balance so we’re never too dependent on one country,” Sheldon says. “Canadian grain will get sold somewhere—if not in China, then in other markets. Other countries need the food that Canadian farmers grow.”

Richardson’s global footprint means its 2,800 employees are spread all across the world. Glamorous, yes, but wide expansion presents its own problems: “We have to keep everyone in the organization up to speed, which gets harder as you grow,” says Sheldon. An annual Christmas party (which they also have, for the record, and it’s lovely) isn’t enough to connect that many people over that many miles, so Richardson works hard to be “a company both big and small,” says Heather Dezan, the assistant vice-president for HR.

One way they do that is via This Week at Richardson, a weekly newsletter that “showcases our news highlights, of course, but also the people,” says Dezan. If someone had a really fun barbecue or someone else’s band is playing a show, the newsletter will probably tell you.

On any employee’s five-, 10-, 15- or 20-year work anniversary, Richardson celebrates with a recognition award. “And when you have your 25th anniversary, you get flown into Winnipeg with your spouse for a four-day celebration of dinners and thank-yous,” says Sheldon, whose own big party is coming in three years.

Richardson is also a big proponent of moving its employees around, for the same reason that farmers rotate their crops: “It cross-pollinates our knowledge and experience,” Dezan says, “so we move our leaders to different physical locations. If you’re willing to relocate, the sky’s the limit here.”

Rotation is one way to ensure that ideas get shared, but sometimes it’s better to concentrate a team in one place. Hence, the need for the new innovation facility in Winnipeg.

“We have all these great people spread all over the place working with a hodgepodge of equipment in different facilities,” says Chuck Cohen, the company’s senior VP of technology. “Our goal became to build a first-class facility to give these people what they need to do their jobs.”

Of course, Richardson could have played it safe and built a factory in a suburb for far less money and fanfare. Instead, they decided to go big and make a splash in the city centre. More than 120 food scientists, product developers, formulation specialists and culinary thinkers will move to the innovation centre.

“We decided to build a showcase building right in the heart of downtown,” says Cohen. “We want to make a statement about where we’re at and where we’re going.”