Shutting down the U.S. government costs a ton of money

$80 million per day and upwards

How much does a U.S. government shutdown cost?

The last one came down to about $1.4 billion, according to an estimate provided by the White House Office of Management and Budget. The year was 1996, the president Bill Clinton and the federal government had been partially paralyzed five days in November 1995 and 21 more days between December of that year and January of the following one. In today’s dollars, that would be roughly $2.1 billion for just under four weeks, or $80 million a day. Below is OMB’s detailed cost estimate (pages 268-270):

Admittedly, in a $15.7 trillion economy with a $16 trillion public debt, that looks like a drop in the bucket. It’s worth keeping in mind, though, that as of late September of this year, Democrats and Republicans were pulling each others’ hair out about a difference in their respective funding authorizations of no more than $1.6 billion.

Besides, the actual tab of this government paralysis is likely to come down to considerably more than $80 million per day, for two reasons. First, the second, three-week hiatus of the Clinton shutdown was a rather small affair in terms of the size of the workforce that was furloughed. It involved only 260,000 federal employees, a third of the 800,000 people who were forced to stay at home in the November 1995 hiatus and today.

Second, OMB’s 1996 estimate was strictly about money moving out of, or not making it into, government coffers. Washington shelled out about $1 billion to pay federal employees — paycheques, that is, in exchange for no work — and $400 million in penalties it owed contractors for late payments, as well as revenue lost from, for example, seven million national park visits that never happened. There is nothing in the agency’s calculations about the shutdown’s effects on the broader economy.

Once you factor in spillovers to the private sector, the price tag rises dramatically. IHS Global Insights, for one, figures the shutdown could cost as much as $300 million a day in lost economic output.

Arguably the worst this government funding crisis could do is trigger a drop in consumer confidence. Consumer spending still accounts for about 70% of the U.S. economy and persistent pessimism among American shoppers is one of the main reasons this recovery has been so slow.

Admittedly, the real kiss-of-death for U.S. consumer sentiment is more likely to come from bickering over the debt ceiling, not the shutdown. When the U.S. threatened to default in 2011, consumer confidence plunged as low as it had been during the worst of the financial crisis. By contrast, when the government actually shut down in 1995-1996, confidence dipped only slightly and recovered quickly. But then, again, a “small dip” today would start from consumer confidence levels that are far below Christmas of 1995: 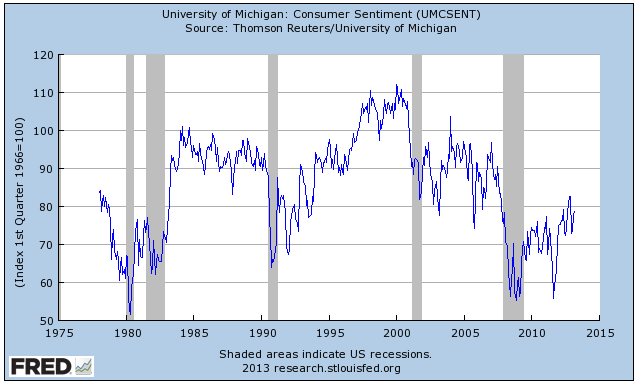