Snubbed by Trump, Silicon Valley talent is looking to Canada 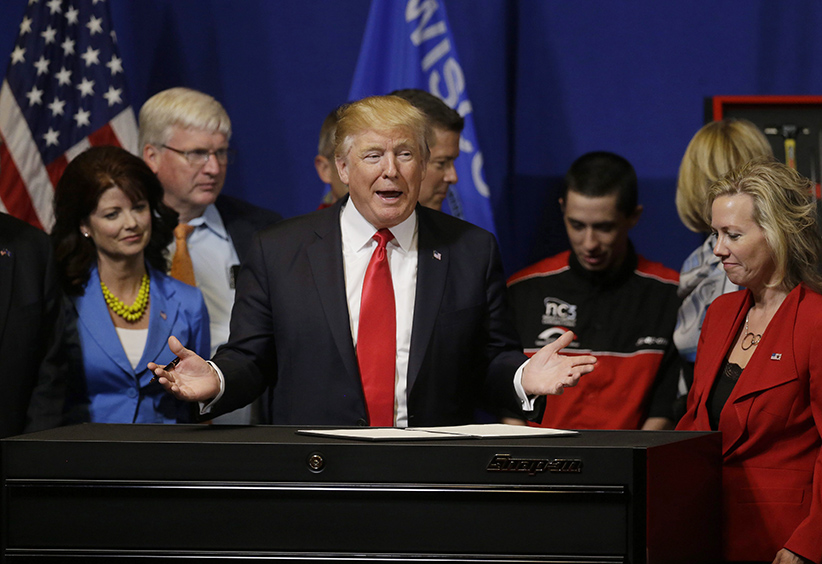 President Donald Trump gestures as he speaks before signing an executive order to tighten the rules for technology companies seeking to bring highly skilled foreign workers to the U.S., Tuesday, April 18, 2017, at Snap-On Tools in Kenosha, Wis. (Kiichiro Sato/AP/CP)

Like many Canadian tech executives, Roy Pereira, CEO and founder of Zoom.ai Inc., struggles to hire and hold on to highly skilled engineers, code writers and seasoned managers. Canadian software engineering grads often head directly to tech hubs like Silicon Valley and San Francisco, or use an entry-level position at the Canadian arms of giants like Google or Facebook as launching pads for U.S. gigs. And who could blame them? The pay is better; the career horizons, wider.

So when Pereira’s small but fast-growing software firm began recruiting for engineers earlier this month, using the usual online channels, he noticed something odd: the number of inquiries from the U.S. and overseas was significantly outpacing those from Canadians. “These were American citizens and sometimes foreign nationals, including a lot of South Asians. They were wanting to come to Toronto.”

MORE: Why ‘sucking up’ to foreign tech companies is a good idea

He interviewed one woman working for Twitter in Silicon Valley. A member of a visible minority, “she wants to move to Toronto because she doesn’t want to deal with the situation down there,” says the 49-year-old serial entrepreneur, alluding to simmering racial and political tensions, as well as the Bay Area’s soaring living costs. “I’ve never seen that before and I’ve been doing this for a while.”

What’s driving these off-shore inquiries, according to Pereira and other executives in southern Ontario’s tech corridor, are the anti-immigrant signals emanating from Trump administration—not just the notorious travel ban on six Middle Eastern countries, but also uncertainty over potential travel headaches for American residents with family in those regions, stepped-up border scrutiny and, in particular, the fate of specialized H-1B work visas.

Washington issues 85,000 H-1B visas annually through a heavily subscribed lottery, including 20,000 to foreign nationals who obtained graduate degrees from U.S. institutions, many of them engineers and software developers. Trump recently signed an executive order directing federal agencies to review the H-1B program and, presumably, recommend toughening the rules—a change that has significant potential to close off positions for highly skilled professionals from around the world who want to work in the roiling American tech sector. “It’s a top-of-mind issue [for U.S. firms],” says Jeff Loeb, an American who recently jumped to Kitchener, Ont.-based Vidyard as chief marketing officer after 25 years in Boston’s tech industry.

MORE: Why Israel is so successful at building tech companies

So, amid all the tales about the fraught state of the U.S.-Canada border—north-bound asylum-seekers, cancelled southbound trips by Girl Guides—as well as these potential rule changes, Canadian firms have found themselves in the happy position of transforming all that stateside nationalist/protectionist fervour into a brain gain.

According to a recent Bloomberg report, U.S. universities have seen a decline in applications from Indian students who, sources said, are concerned about visa restrictions and racially motivated attacks, and who increasingly look to countries like Canada, Ireland and New Zealand for higher education and career opportunities. In the past few months, in fact, this unexpected opening has become a point of eager discussion at recruiting and tech-industry conferences, with panelists urging audience members to seize the day. “There’s never been a better time to attract global talent and capital to Canada,” Janet Bannister, a general partner at Real Ventures, a Toronto finance firm, said at one such gathering, alluding specifically to the political situation in the U.S.

At a biotech industry conference last month, Bradly Wouters, a top Toronto University Health Network researcher, observed that “it’s no secret that success in the U.S. has depended on ability to attract talent from around world.” That appeal, he added, is “threatened by the winds of change” and described the moment as “extremely opportunistic” for Canadian companies looking for highly skilled people.

Some tech-industry groups and firms have gone so far as to launch advertising campaigns or open letters aimed at attracting skilled foreign workers. CityLab reported recently that a Vancouver entrepreneur and some counterparts in the San Francisco area have set up a company, True North, that will help foreign nationals find positions in the sprawling tech sector in B.C.’s Lower Mainland. Even Prime Minister Justin Trudeau has gotten in on the act in a guest post on Quora earlier this month, pitching to international students and high-skill workers on Canada’s universities, tech firms and ethnocultural diversity. He offered carrots such as a significantly reduced permit process. “We want to help high-growth companies bring in the talent they need quickly by slashing the processing time for a Canada visa application from six months to just 10 business days,” wrote Trudeau, who didn’t mention Trump by name but slipped in a not-so-veiled dig at the president’s climate change denialism by noting that “our government is committed to evidence-based policy and respecting academic freedom.”

Yet some Canadian tech players say the spike in applications they’re seeing isn’t coming from international engineers so much as the aforementioned Canadian tech graduates who followed their careers to high-paying careers south of the border. “I’ve seen a lot of engineers [from the Universities of Waterloo or Toronto] who went to the U.S. during the 2009-2010 tech boom…who are saying, ‘Hey, we’re thinking of moving back,’” says Derrick Fung, CEO of Drop, a Toronto start-up whose app allows users to earn rewards on top of what their existing card reward programs provide. “We’re attracting people who’ve worked at Facebook and Snapchat.”

MORE: Canada is a laggard at attracting investment. Here’s how to fix that

Not everyone agrees. Derek Ting, the 29-year-old founder TextNow, a cloud-based, low-cost mobile phone service based in Waterloo, Ont., and with an office in San Francisco, says highly skilled younger people will continue to follow their careers and seek out firms that have a strong culture and a sense of mission, regardless of the ambient political mood.