The gig economy keeps growing, but its workers are fed up

Collective action has become a rallying cry around the world for Foodora couriers, Uber drivers, and other gig economy workers. But will the movement be successful? 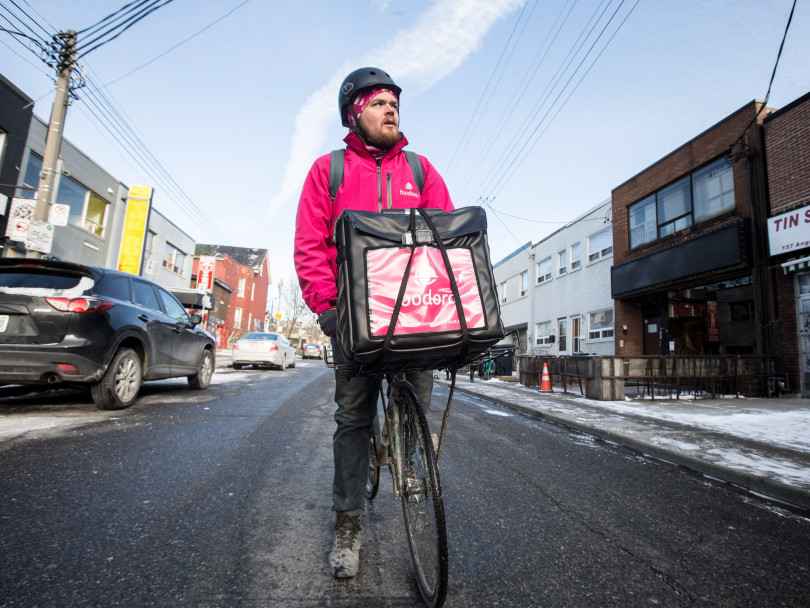 On the morning of Nov. 6, a group of Foodora food delivery workers arrived for a “breakfast rally” in front of the Ontario Labour Relations Board, which is holding a series of hearings through early 2020 on their right to join the Canadian Union of Postal Workers (CUPW).

Clad in a telltale pink jersey, one Foodora worker told a CityNews reporter that he is semi-employed by five different “gig economy” companies, and that he was fed up: “It’s just gotten worse and worse and worse,” he said, “and we’ve gotten to the point where we need to fight for our rights.”

Uber drivers are also pushing to unionize, hoping to join the United Food and Commercial Workers Union (UFCW). Uber Black, a pricier premium ride-sharing service that promises professional drivers, recruited Ejaz Butt seven years ago while he was working as a limousine driver at Toronto Pearson Airport, and he says that he now works 12-hour shifts, sometimes seven days a week. “We are workers, just like at any other company,” he says, noting that he hopes a union will give drivers “a voice.”

READ: How one Ontario town used Uber to solve its public transit crisis

Buried in the details particular to Foodora workers and Uber drivers—concerns about cycling injuries, about unpaid time while waiting for delayed flights to arrive—are the underpinnings of every class conflict: the idea that people are being exploited, exhausted and underpaid by profitable companies.

Collective action has become a rallying cry around the world for people employed in the gig economy (where freelance workers take on short-term assignments, sometimes navigated through an app, for one or more employers). Once hailed as innovative, the gig economy is now the target of some tough questions about its reliance on a labour force that usually receives no protections like paid time off, benefits or parental leave. But there are questions about exactly how a more conventional union model can be applied to the future of work, and whether new ways of protecting workers are needed as work becomes increasingly fragmented.

So how can workers retain the things they like about gig-economy work—namely, the flexibility and independence—while also enjoying the protections traditionally extended to full-time employees?

Linda Nazareth, an economist in Toronto and author of Work Is Not A Place: Our Lives and Our Organizations in the Post-Jobs Economy, has concerns about Uber and Foodora becoming representative of the gig economy. While we tend to think of app-based work, the term actually encompasses a wide variety of workers who face a number of uphill battles when it comes to things like securing bank loans and determining parental leave. “If you’re a graphic designer going from employer to employer, you may be entitled to nothing and that’s not right,” she says. “We need to figure a different way of doing this.”

According to Statistics Canada, temporary employees have been growing at a faster pace than permanent employees over the past 20 years. In 2018, 13.3 per cent of employees worked in a temporary job, up from 11.8 per cent in 1998. The Bank of Canada estimates that the gig economy represents the equivalent of 700,000 full-time jobs, or 3.5 per cent of the total workforce. “Unions have struggled to adapt to a modern worker who isn’t pegged to a single employer or location,” says Maurice Mazerolle, associate professor of organizational behaviour and human resource management at Ryerson University.

READ: As the age of AI looms, what is the future for labour and unions?

But the circumstances that make the gig economy a tough place to organize—unspecified schedules, independence and the tendency to work from one’s own home or car—are also the circumstances that entice workers. “I see everything from students who are using Uber as an extra gig and retirees who want social interaction to newer immigrants who can’t find other work,” says Nura Jabagi, a doctoral candidate at Concordia University who studies the gig economy.

The concept of independent work has also been increasingly romanticized, with narratives about “digital nomads” who polish marketing materials while sitting on the edge of a white-sand beach. Foodora’s recruitment efforts, for instance, lean heavily on the idea that app-based work is a way to “reclaim your time” and “explore your city,” all while making your own hours. Sylvia Fuller, a sociology professor at the University of British Columbia, says that is an incomplete picture, noting that while the gig economy might be a dream for workers who have skills that are very much in demand, “for the vast majority of folks, that so-called flexibility feels a lot more like instability.”

The pushback has already started and pressure on gig economy employers will likely intensify in the year ahead. Recent legislation—notably in California and New Jersey—require a reclassification of many independent contractors as employees. Foodora workers in Norway and Uber Eats couriers in Japan formed unions in September and October respectively, earning injury compensation and wage increases. The Foodora union would be the first of its kind in Canada, and could serve as a precedent for other precariously employed groups.

According to a statement issued to the CBC, Foodora has argued that unionizing may limit flexibility and that paying union dues would be harmful to many workers.

But Ivan Ostos, a Foodora courier in Toronto, balks at the idea that pressing for greater rights means sacrificing the appeal of gig-economy work. “The model that these employers sell to us is flexibility, be your own boss,” he says. “But there’s nothing that says we can’t earn a minimum for the hours we put in, there’s nothing that says we can’t have health and safety coverage, or grievances so that some people aren’t suddenly fired by an algorithm.”

While some unionization efforts have been based on the premise that most people would prefer conventional full-time work for a single employer, others maintain that protections can be implemented for those who prefer to work on a per-project basis.

Mazerolle notes that some unions, like Unifor, have introduced an “association model,” where multi-employer workers can benefit from things like group purchasing power and access to legal resources. Organizations like the Screen Actors Guild-American Federation of Television and Radio Artists collect dues, offer benefits and negotiate wages on behalf of over 160,000 members with widely varied employers.

In good times, as Mazerolle points out, workers can vote with their feet. But when decent jobs are scarce, collective action can help protect and amplify a single voice. “The fissuring of the workplace and the increase in precariousness is only going to continue,” he says. “Unless public policy catches up with reality, which it hasn’t, you’re going to find a lot more frustration out there.”

This article appears in print in the January 2020 issue of Maclean’s magazine with the headline, “Order up a union.” Subscribe to the monthly print magazine here.