Caught trying to mimic the latest hot product, the most powerful tech firms can’t seem to dream up anything genuinely new 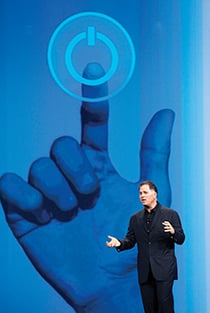 It’s a sure sign a company is in desperate straits when journalists go searching for answers from a former pitchman. In a recent interview with Bloomberg, Ben Curtis, the actor who played the “Dell dude” in computer-maker Dell Inc.’s 2000-era commercials (in which he would inform strangers “Dude, you’re getting a Dell”), suggested his troubled former employer could get a sorely needed boost if his character were resurrected. “Since that campaign ended, Dell has lost their personality,” Curtis said, adding that he, too, now uses an Apple Inc.-made laptop.

Dell’s problems won’t be so easily fixed. In a bid to speed up a badly needed transition from hardware manufacturer to provider of high-margin software and services, founder and CEO Michael Dell and private equity firm Silver Lake Partners are proposing a massive $24.4-billion leveraged buyout of Round Rock, a Texas-based company that once held the title of the world’s largest maker of personal computers. It’s just another reminder of how fast the technology industry moves. One day a company is the most powerful in Silicon Valley, with a soaring stock price; the next it’s contemplating moving away from the very business that made it a household name. (In Dell’s case, its outstanding shares, once worth nearly $60, are being purchased by its founder and Silver Lake for $13.65 apiece.)

Although desktop and laptops remain ubiquitous in homes, offices and schools, sales of PCs have slumped in recent years as consumers increasingly use smartphones and tablets. Worldwide PC shipments totalled 90 million units during the last three months of 2012, according to Gartner Research, a 4.9 per cent decline from the same period a year earlier. In Canada, the fall was even steeper—down nearly 14 per cent. “We’re approaching a saturation point in the market,” says Tim Brunt, an analyst at consulting firm IDC Canada. “There are multiple PCs in every household. Everybody’s got one, so now it’s just about buying replacements.”

One-time industry titans such as Dell, Hewlett-Packard Co. and Microsoft Corp. have been left racing to adapt to this new mobile environment. Yet despite their years of experience and vast war chests (Microsoft has some $68 billion in cash), all have failed so far to develop the sort of game-changing products and services that consumers now expect in an era of iPhones and iPads, as well devices running Google’s Android mobile software.

Instead, the PC industry seems to have settled for aping Apple’s products—usually with mediocre results. Is it an innovation crisis? Or have companies like Apple Inc. and Google Inc. raised expectations so high, it’s become impossible to measure up? Even Apple itself is now feeling the heat as investors begin to ask why it has failed to launch an iTV product or some other device that causes people to fundamentally rethink an existing product or service, or how they interact with it.

It may well be that true innovation comes along far less frequently in Silicon Valley than we’ve been led to believe.

Few companies have exemplified the “me-too” approach in recent years better than Dell. It didn’t invent the personal computer, but it pioneered a low-cost manufacturing system and a direct-to-consumer sales model credited with helping to slash the price of the average PC from $2,000 in 1995 to just $700 by 2011. In the same way that Apple changed the way people buy music through iTunes, Dell changed the way they bought computers by steering customers away from stores and toward Dell’s website, where they could build their own machines by choosing components and devices such as speakers. With a little help from Curtis’s on-screen antics, the approach made Dell a $100-billion company.

But it also spawned a host of imitators—several who proved to be better equipped to take advantage of the business model Dell thought it had perfected. Dell relinquished the title of world’s biggest computer maker to HP in 2006 and has since fallen behind China’s Lenovo Group Ltd., which boasts much lower costs. Although Dell remains profitable, earning $475 million in its last quarter, its shipments of PCs are estimated to have fallen 20 per cent during the last three months of 2012, compared to a year earlier, according to data compiled by IDC. “It is very difficult to stay innovative and stay on the top,” says Mikako Kitagawa, a California-based analyst at Gartner Inc. “In the case of Dell, they were late to take action as the industry changed.”

Dell’s frantic efforts to play catch-up were chronicled in a recent post on the technology website, The Verge. As the popularity of Apple’s iPod skyrocketed in 2003, Dell responded with a clunky device called the Dell DJ, which resembled a garage door-opener with a digital screen. It was followed with the equally awkward-looking and unfortunately named DJ Ditty in 2005. Several years later came a few weird laptop designs, including one where the screen could be tilted independently of the case, and another that sat at an odd angle when resting on a table. “If you squint, you can see the rough beginnings of today’s hybrid tablets,” said The Verge. “But if you open your eyes all the way, what you really see is Dell trying so hard to out-design Apple that it went completely insane.”

Marc-David Seidel, a professor at the University of British Columbia’s Sauder School of Business, says Dell’s inability to get up to speed in a changing market is not unusual. He says most companies are “imprinted” by particular market conditions and those outlooks are difficult to change. In Dell’s case, its business was operating a manufacturing and supply network like clockwork—until Apple came along and forced the industry to think about design, too. “They weren’t built to do that,” Seidel says. The same thing happened to BlackBerry (formerly Research In Motion Ltd.), which stuck to its text-focused devices, even as Apple proved consumers wanted big touchscreens.

Dell is now attempting to follow yet another company’s lead. IBM sold its PC division to Lenovo in 2004 to focus instead on software and services. Similarly, Dell has spent the past few years buying up companies in the software space, including Quest Software and cloud-computing company Wyse Technology—an acquisition spree that’s expected to continue if shareholders approve the privatization deal. “We’ll have the flexibility to continue organic and inorganic investment and drive industry-leading innovation,” Dell said in a recent jargon-laden letter to customers.

If Dell’s path forward is unclear, so too is the rest of the PC industry’s. HP is mired in its own problems as sales of PCs and printers fall and it struggles to absorb several ill-advised acquisitions. They include IT services company EDS, which HP purchased for nearly $14 billion before embarking on a series of massive reorganizations and layoffs, and software firm Autonomy, which cost $11 billion and was later the subject of an $8.8-billion write-down after HP claimed to have discovered shady accounting practices. The company has also gone through six CEOs since 2005, the latest being Meg Whitman, and has seen its share price fall 60 per cent over the past five years to $17—about where it was a decade ago.

Microsoft may be the worst offender when it comes to failure to innovate. Its shares have flatlined over the past 10 years despite repeated attempts to diversify from PC software sales. But with the exception of products like the popular Xbox video-game console, most of Microsoft’s efforts have failed to produce the desired result. Its Zune music player was mocked; its Bing search engine mostly ignored; and its smartphone software remains a bit player in a market dominated by Google’s Android and Apple’s iOS.

That’s why so much is now riding on Windows 8. The latest update to Microsoft’s operating system, which runs on more than 80 per cent of the world’s computers, is meant to marry the world of laptops and desktops with touchscreen smartphones and tablets, giving Microsoft a new lease on life in the rapidly changing industry. (Microsoft also contributed $2 billion to Dell’s leveraged buyout in an apparent bid to help prop up a long-time hardware partner.) But early reviews of the OS have been mixed. Kitagawa calls Windows 8 a “remarkable improvement,” but notes that many desktop Windows users have so far balked at the system’s unfamiliar interface. At the same time, Microsoft is trying to launch itself into the tablet market with the Surface tablet, but it’s not yet clear whether it will be a hit with consumers.

Why does it seem so difficult for these companies to use their massive cash reserves to churn out truly original new products? For one thing, experts say, innovation is difficult, expensive and often doesn’t pan out. That’s why most innovation comes from young start-ups. “The people who are going to be creative are generally not going to be business types,” Seidel says. It’s also why most big tech companies can be traced to a single innovative idea: Google’s search engine, Microsoft’s software platform or Dell’s direct-sales model.

The exception has been Apple. It started out making computers in the late 1970s and, following the late Steve Jobs’ return in 1997, shifted into high-end consumer electronics with the iPod, iPhone and iPad. Jobs accomplished the feat by having an exceptional feel for which way the technology winds were blowing and a willingness to take big gambles. At Jobs’ request, the team that developed the iPhone was instructed to have no contact with anyone else at the company. Jobs wanted his designers and engineers to feel as though they were working at a start-up, and he didn’t want other employees raising concerns that the new device would cannibalize sales of the iPod, Apple’s existing meal ticket (which it did). Google, by contrast, tries to encourage innovation by allowing employees to spend 20 per cent of their time working on personal projects. It’s also famous for experimenting with zany new technologies, including Google Glass—an eyeglass-like device equipped with smartphone capabilities.

Dell may now be trying to pull off a similar coup. Few are holding their breath, but there’s some evidence to suggest a spark of innovation still exists in Round Rock. At the recent Consumer Electronics Show, Dell showed off a tiny device that looked like a chubby USB key. Dubbed “Project Ophelia,” the device is built on technology Dell acquired through Wyse and is designed to be a virtual computer that can be plugged into any flat-screen monitor or TV set. It uses Android software for local tasks, WiFi to connect a keyboard and mouse, and delivers apps through the cloud. A long shot, to be sure, but if it works? Dude, that would truly be an innovative product.