Stephen Gordon: How to propose an austerity budget and try to dodge a political battle 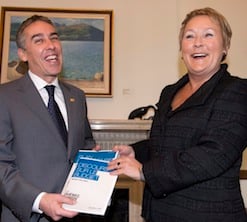 Perhaps the most interesting aspect of the 2013-14 Quebec budget is its timing—why did it have to be brought down now, in November, instead of next March? The government noted a modest downward revision in forecasts for economic growth, but that is hardly a crisis that requires immediate action.

I can think of two quick answers:

Either way, the goal of this budget seems to be to buy time. The expected loss in revenues due to slower economic growth in the current (2012-13) fiscal year are relatively small—around $195 million—and are covered by the increases in taxes on tobacco and alcohol.

Eliminating the flat $200 health tax—a central element of the PQ platform—turned out to be a very costly promise. So was the subsequent, compromise commitment to eliminating it for low-income households and increasing it to $1,000 for those with high incomes: this shift reduces revenues by $400 million. This hole is to be closed by introducing a new tax rate of 25.75 per cent (up from 24 per cent) for incomes over $100,000. The new combined federal-provincial top income tax rate will now be 49.97 per cent—not the 55.22 per cent that had previously been floated. (As an added bonus, the government appears to have taken into account the likelihood of a behavioural response to these new tax rates.)

In the absence of significant new tax revenues (the new income tax rate replaces revenues lost from making the health contribution more progressive), the budget will be balanced through a combination of spending cuts—many of which have yet to be specified—and squeezing Crown corporations for extra revenues. Among other measures, Hydro-Quebec is expected to cut its workforce by almost 10 per cent in the next year, apparently without affecting consumer services.

The next 15 months or so in Quebec City are going to look a lot like what’s going on in Ottawa: cuts everywhere, and not all will go unremarked. The difference is that the federal Conservatives have the luxury of knowing that they won’t have to fight an election for the next three years. The PQ can only hope that they can hang on to power long enough to announce a balanced budget in the spring of 2014.