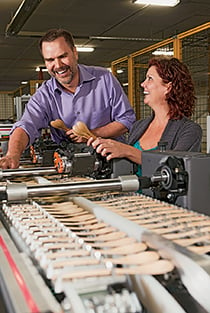 For three decades, the Ernest C. Manning Awards Foundation has recognized Canadians who develop and market successful innovations. This year, the awards are about imagination and stamina, says David Mitchell, the foundation’s president. Each of the four winners created a homegrown, breakthrough product. (Two of the prizes, the Innovation Awards, go to those who haven’t had access to research facilities or advanced education in their fields). All of the inventors refined their ideas constantly—sometimes over decades—until they had something they knew would make a difference.

In the mid-1990s, Geoffrey Auchinleck and his business partner Lyn Sherman visited a small hospital in England to sell an electronic system to manage their lab test requests. During the sales call, the laboratory manager listened politely, shook his head and pointed to a refrigerator of donor blood. Help me with that, he said.

The lab manager fielded requests for blood transfusions and matched blood units to the patients. But after the units were picked up he lost control. Some units were transfused, others were returned or went missing. He needed a way to track who had picked up what, what had been used and how long a unit had been out of the fridge. It was basic information that could help the flow of a scarce resource.

By 1999, Canadians Auchinleck and Sherman had a simple bar-coding checkout system in place. When a porter retrieved a blood unit from the bank, he scanned his tag, scanned the unit and delivered it to the ward. Now there was a time stamp. If the unit didn’t get used within 30 minutes, it could be returned.

Still, there was the pesky and important issue of making sure the blood was transfused into the right person. Auchinleck added a bar code to the patient’s wristband and updated the tag on the blood unit. Now when a blood unit was issued to a patient the new label contained all the patient’s information. The nurse scanned both the patient and the blood before starting the transfusion to make sure they matched.

But the revolutionary step was yet to come. “We thought, ‘Why don’t we put the blood right in the operating room?’ ” says Auchinleck. By 2005 a new automated system was in place: if the patient in the OR required a transfusion, medical staff scanned the patient’s wristband, performed a computer query and selected the blood from a secured, refrigerated blood dispenser. “We moved it from a just-in-case paradigm to a just-in-time paradigm.” Today, 150 to 180 hospitals around the world are using one or more parts of the system. The Irish government has rolled out the BloodTrack system nationwide and in Canada it is used, so far, in Halifax, Toronto, Hamilton and London, Ont.

Auchinleck never went back to the lab test request system. “We went barging into the labs saying, ‘This is what you need,’ ” he says of that earlier project. “What matters is the customer’s needs.”

In the 1970s, medical scanners were bulky machines that offered doctors fuzzy images of the diseases they were trying to pinpoint. Today, one type of whole-body scan called positron emission tomography (PET) uses radiation to spot cancers, diagnose some brain disorders and detect cardiovascular disease. Scientists also use PET for drug development. The technology, for instance, allows them to follow the potent molecules through a mouse’s tiny blood vessels to their target. Roger Lecomte, a nuclear physicist at the University of Sherbrooke, in Quebec, improved the image resolution of the PET scanner so much that he was the first to be able to scan small animals.

Thirty years ago, Lecomte, a post-doctoral scholar in the university’s nuclear medicine department, began working on a new PET scanner that produced more precise images. He targeted the machine’s oversized photomultiplier tubes, which converted radiation into an electrical signal to produce the image. He tracked down the Montreal inventor of a tiny semiconductor called an avalanche photodiode that was being used in missile guidance systems and swapped it into the device. It was like moving from a vacuum tube television to a flat screen.

It took years before the detector worked and produced an image. But by 1994, Lecomte had a prototype. “There were wires everywhere. It didn’t look like a medical machine at all,” he says. It was also unsaleable. Apart from its looks, it took an engineer and a physicist to operate. In 2002, Lecomte joined forces with Réjean Fontaine, an electronics expert, to transform the machine into one they could sell. They formed Advanced Molecular Imaging and launched the LabPET.

The LabPET contributed to the pioneering work using PET technology in preclinical studies to investigate new drugs, where mice and other small animals play a critical role in their development. “It’s very useful to translate the discovery of new drugs or therapy from animals to humans,” says Lecomte. Today it’s used on four continents and in nearly 40 research centres.

Farmers are always looking for ways to increase crop yields or avoid loss. One key target: the soil, which can lack micronutrients, resulting in stunted young plants and yellowed or wilted leaves. In 1998, Geoffrey Gyles and Kerry Green were working out of their homes providing support for other manufacturers’ agricultural products. When the co-owners of Winnipeg-based Wolf Trax Inc. began looking for a micronutrient product that would get into the plant early and last for an extended period of time, they couldn’t find one. So they created their own.

They consulted with several chemists and came up with a product that allowed them to combine micronutrients together in a solution. But handling, shipping and storing the liquid proved problematic. Freezing ruined it, too. They switched to a fine dry powder that coats fertilizer granules through an electrostatic adhesion (the same force that sticks a balloon to a wall after it’s rubbed on your hair). “It gets across the field to each and every plant,” says Gyles.

Today, Wolf Trax sells its products throughout North America and Europe. “There aren’t a lot of small companies developing new chemistries in agriculture,” says Green. “We’re one of the few that has been able to take a product from a seed of an idea to selling it all over the world.”

North Americans add roughly 100 billion pieces of plastic cutlery to landfills every year: bendy-pronged forks, meltable soup spoons and dull knives. Terry Bigsby, the co-founder of Aspenware, a Vernon, B.C.,-based company, has solved the waste and performance problems of disposable cutlery with a compostable, wood-based version that he first concocted in his kitchen 15 years ago.

In the beginning, it was slow going. Bigsby, his father and two partners spent nights and weekends in his kitchen, cutting birch veneer, molding it with a re-built waffle iron and gluing pieces together with a paste of flour and water. “It took between two and three hours to make a single piece of cutlery,” says Bigsby, who was a high school shop teacher at the time. They sold pieces to individuals, stores, fairs and theme parks.

But the product had bite. In 2003, encouraged by a friend, and backed by investors and industry advice, Bigsby quit teaching and transferred operations to a 700-sq.-foot shop. By 2005, they’d moved into a larger factory with their first prototype production machine. This year, they moved again. The 25,000-sq.-foot production facility has a custom-made production line and kicks out 18,000 pieces of flatware an hour—a rate Bigsby aims to nearly double. “It’s taken 10 to 15 years of R & D to get here,” says Bigsby, highlighting changes to the original engineering: a two-tone aspen and birch veneers, laminated together and sealed with carnauba wax to avoid the rough texture of other wooden eating utensils. (Each piece sells for about eight cents). “We’re an overnight sensation,” he laughs.

The deadline for nominations for the 2013 awards is Dec. 3, 2012. For submission details, go to manningawards.ca.