Signs of the times... 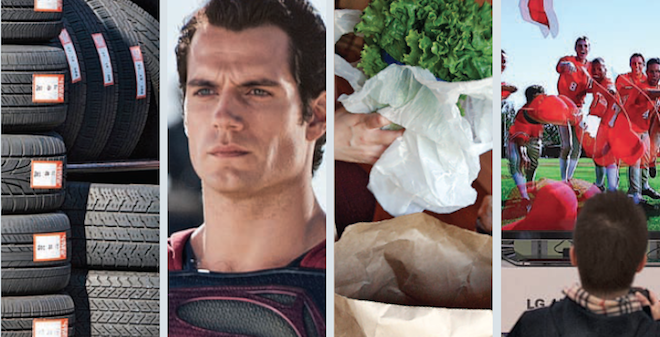 The auto industry has long touted leasing as a way for consumers to climb behind the wheel of cars they can’t afford to buy. Now, several shrewd companies are doing the same thing with tires, which have been getting more expensive thanks to rising rubber and oil prices. But be prepared to pay. Renting a set of four all-season radials often ends up costing double or triple what they’re worth new.

It’s a bird! It’s a plane! It’s a lucrative promotional tie-in! The new Superman movie, Man of Steel , boasts a record 100 different promotional partners, ranging from Gillette and Nokia to Wal-Mart and Carl’s Jr. An even more impressive feat? The film, as a result, has raked in over $160 million before selling a single box-offi e ticket.

Amazon.com hopes to crack the difficult business of selling groceries online by expanding its fledgling AmazonFresh delivery service from Seattle to Los Angeles. Though delivering perishable items profitably has proved too much for many companies—including Webvan, which famously flamed out during the tech bust—investors should take comfort in knowing that Amazon is one of the few dot-com is still around from those early days.

Watching television in 3D was supposed to be the future. But it’s turning out to be more of a pain in the neck. ESPN has pulled the plug on its 3D sports channel after consumers balked at paying extra for the technology, which doesn’t always work if viewers are lying on the couch, or sitting somewhere other than directly in front of the set. Not to mention those ridiculous glasses.

FILED UNDER: signs of the times