With shares trading around $46, the social media company has avoided a Facebook-like flop 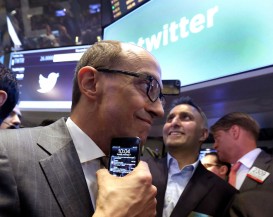 Twitter CEO Dick Costolo, left, and Mike Gupta, chief financial officer of Twitter, wait for shares to begin trading during the IPO, on the floor of the New York Stock Exchange on Nov. 7, 2013. (Richard Drew/AP)

Twitter’s stock soared on the New York Stock Exchange Thursday morning following the company’s $1.8 billion initial public offering. The shares,  priced at $26, jumped to nearly $50 once trading got underway before settling back down to around $46. That translates into a market valuation of about $27 billion.

The initial public offering is the biggest by a U.S. tech company since Facebook’s troubled IPO last year, and raised about the same amount of money as Google did back in 2004.

The popular micro-blogging service took several steps to prevent its IPO from falling into the same trap that Facebook’s did. It attempted to keep the hype around the public offering to a minimum by including as little detail as possible in its initial filings with regulators (whether it worked is another question). The company also resisted the urge to over subscribe the offering in a bid to keep demand for the shares high.

Even so, Twitter’s current valuation suggests that investors expect great things. According to Bloomberg: “Twitter’s IPO price values the microblogging service at 12.4 times estimated 2014 sales of $1.14 billion … higher than the 11.6 times that Facebook was trading at yesterday and similar to LinkedIn Corp.’s  multiple of 12.2 times sales.”

But while Twitter’s prospectus showed a company with fast-growing ad sales, several analysts have warned that Twitter also faces some unique challenges. For one thing, it has never made a profit in its seven-year history. In addition, Twitter’s user base is a fraction of the size of Facebook’s—about 215 active monthly users compared to more than one billion—which makes it a harder sell with advertisers who are interested in amassing eyeballs. Moreover, Twitter users “tweet” from their mobile devices, where it’s more difficult to place ads because of smaller screen sizes.

The bulls, on the other hand, point to CEO Dick Costolo’s patient approach to building the company’s business model, and a yet-to-be-tapped reservoir of data about users.