U.S. and Canada's coal regulations side by side: Who wins?

We have the edge for now, writes Andrew Leach

The new U.S. regulations have been the subject of significant speculation and some pointed jabs from Canada’s Minister of Natural Resources, Joe Oliver. Now that the details are out, let’s compare the proposed U.S. regulations to those currently in effect in Canada.

1. Both Canadian and U.S. regulations would impact new builds of coal-fired electricity generating stations. Canadian regulations initially proposed a limit of 350 kg of carbon dioxide emissions per megawatt hour, but the final version of the regulations saw this limit raised to 420 kg. Given that a new coal plant can’t meet either of those standards without adding carbon capture and storage technology, the limit will only determine how intensively a new plant would have to run its carbon capture unit. The U.S, limits are, on this dimension, weaker than Canada’s.

The Canadian standard has a fixed start date and no significant flexibility for meeting the standard. By contrast, the New York Times reports that significant flexibility is already being proposed for the U.S. regulations: “Plants that could install the technology within 12 months would be required to meet the (500 kg) limit… owners of coal plants would also have the option of phasing in [a tighter 475 kg limit] over a seven-year period.”

Score one for Canada.

2. The proposed U.S. regulations would also affect new gas-fired generation, but with a limit of 450 kg per megawatt hour of electricity produced.  A new combined-cycle natural gas power generator would generally expect to have an emissions intensity of less than 400 kg per megawatt hour, so these regulations are unlikely to be binding. Canada, on the other hand, has yet to regulate new natural gas generation.

Let’s call that one a draw.

3. Now let’s take a look at how much the regulations are likely to affect total GHG emissions. Coal-fired power makes up the largest share of electricity generation in the U.S., although that share is expected to decline thanks mostly to the rise of natural gas (see the chart below). The U.S. generates over 1.7 million megawatt hours from coal-fired power, compared to less than 100,000 megawatt hours in Canada, and U.S. coal generation is expected to remain roughly constant through 2040 absent any new regulations. Further, as the figure below shows, the U.S. was expecting some eight gigawatts-worth of new coal-fired power plants to be built between now and 2040 (although six gigawatts of that is expected to be built before the regulations are in effect in 2017), along with over 215 megawatts-worth of new gas plants. For comparison, Canada had 16 gigawatts of total coal-fired capacity installed in 2012. Also, Environment Canada estimated that, “between 2010 and 2025, 28 units were expected to cease operations.” Those 28 units account for 51 per cent of the existing fleet. Regulations that affect proposed new coal plants in the U.S. are therefore likely to have a larger overall impact on GHG emissions than Canadian regulations. 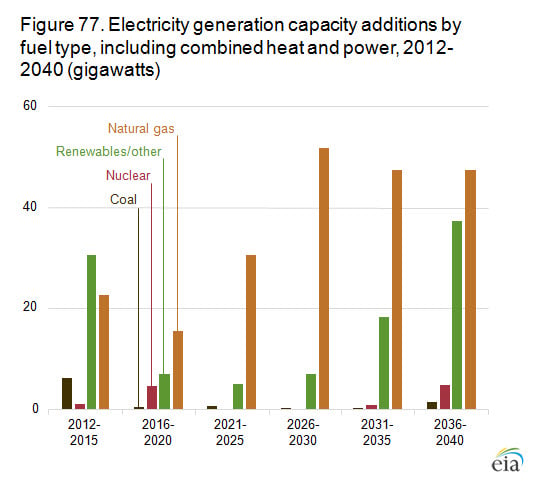 Score one for the U.S.

4. Finally, the U.S. rules do not, at this stage, affect existing coal-fired power plants — those GHG curbs will likely come next year. Canadian regulations only affect existing coal plants once they have been producing for approximately 50 years or plants undergoing major refurbishment: Their effect will not be felt on a large scale for decades. Whether the future U.S. regulations will have more impact, though, remains to be seen.

Score another one for Canada, for now.

Of course, the fight over these regulations in the U.S. is only beginning. The coal industry will have an opportunity to make its case, as will those who would seek stronger regulations. At this point, the Canada-U.S. score is fairly even, but I’ll give the edge to Canada since our regulations are on the books and already having an impact. The big score points, though, are still up for grabs. It remains to be seen what the final U.S. regulations for new coal plants will look like and what, if anything, the U.S. will do with its existing coal-fired power plants.