What does that $14 shirt really cost? 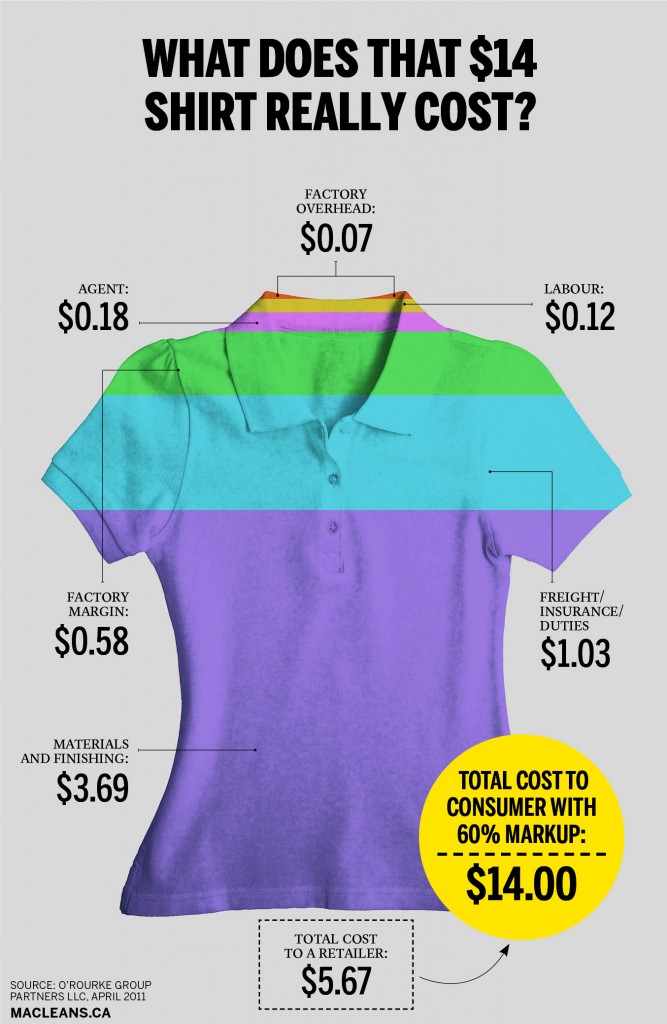 Photo illustration by Lauren Cattermole. Markup based on selling price.

The following story on the real price of low-cost apparel was originally published May 1, 2013:

Before last week, Loblaw’s Joe Fresh was known mostly as a hot spot for cheap, stylish clothing. Few customers likely cared how the clothes were made. That all changed with the deadly collapse of an eight-storey factory complex used by the retailer in Bangladesh. Hundreds of people are dead, and the owners of the complex—and the factories within it—that was reportedly built without proper permits, have been arrested on charges of negligence. Bangladesh’s government has vowed to inspect every manufacturer in the country.

The worst industrial accident in Bangladesh’s history offers an uncomfortable glimpse into the fast-growing garment industry there, and the treatment of its workers. According to a 2011 report by the consulting firm O’Rourke Group Partners, a generic $14 polo shirt sold in Canada and made in Bangladesh actually costs a retailer only $5.67. To get prices that low, workers see just 12 cents a shirt, or two per cent of the wholesale cost. That’s one of the lowest rates in the world—about half of what a worker in a Chinese factory might make—and a major reason for the explosion of Bangladesh’s garment industry, worth $19 billion last year, up from $380 million in 1985. The country’s 5,400 factories employ four million people, mostly women, who cut and stitch shirts and pants that make up 80 per cent of the country’s total exports.

For that $14 shirt, the factory owners can expect to earn 58 cents, almost five times a worker’s wage. Agents who help retailers find factories to make their wares also get a cut, and it costs about $1 per shirt to cover shipping and duties. Fabric and trimmings make up the largest costs—65 per cent of the wholesale price. Toronto-based labour rights activist Kevin Thomas says wages ultimately get squeezed most because businesses can easily control them, unlike the price of cotton or shipping.

A cost breakdown only partly explains the maze of relationships in the garment-supply chain. The retailer H&M, which had no connection to the collapsed building, works with 166 different factories in Bangladesh. It has published its supply chain, listing every factory around the world that makes H&M clothing in an effort to prove what most major stores claim: that it knows where its clothes come from. But according to observers, many don’t. Though most brands have a regular stable of factories, they may contract hundreds more for short stints. “It would be a very high risk to have a limited number of suppliers,” says Adriana Villaseñor, a senior adviser with the global retail consulting firm, J.C. Williams Group. Smaller factories often take on more than they can produce, Thomas says, and then subcontract later on—without the retailer’s knowledge. This week, Wal-Mart said it had “no authorized production in [the collapsed] facility,” but added that if unauthorized production were discovered, it would take “appropriate action.”

Amid mounting protests, both in Bangladesh and abroad, and calls for boycotts, retailers have pledged to improve working conditions. Primark, a U.K. chain that made goods in the ruined factory, and Loblaw Companies Ltd., have said they will compensate victims’ families. But Bangladesh is just one country in a vast supply chain. H&M, for instance, uses hundreds of other factories, including 262 in China. In Vietnam, workers make only slightly more than in Bangladesh: 14 cents per shirt. Real reform will mean paying a lot more than $14 for a shirt.