What the data shows about female breadwinners in Canada

Gender roles in the home and workplace evoke deep, primal responses. In the U.S., a recent Pew Research study showed that females were breadwinners in an increasing share of American families. The news led some excitable commentators to worry about watching “society dissolve around us.” In Canada, you don’t have to read very far into Erin Anderssen’s Globe and Mail series on housework to see gender tensions boiling over.

There is a strong, continuing trend in Canada toward more families with women at the economic helm of the household. Below I chart the proportion of male and female breadwinner couples, from 1976 to 2010. (The data can be found here.)  Couples with female breadwinners have almost quadrupled, from an 8 per cent share in 1976 to over 31 per cent in 2010. The comparable number for the U.S. is 22.5 percent in 2011. 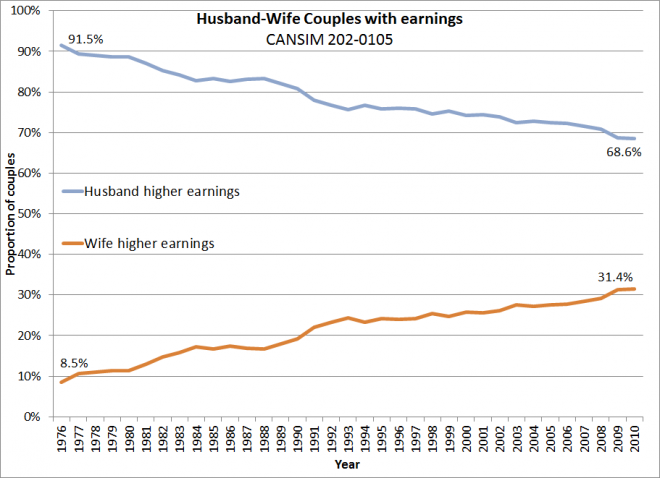 Such phenomena are often driven by several factors, but if we “commit” a little social science on these data, as our PM would say, we can make progress in figuring this out. Let’s turn to the 2006 Canadian Census, which has information on incomes within families, and take all opposite-sex couples (data on same-sex couples are not available and comparable through time) and record whether the male partner or the female partner has higher income.

If the trend in female breadwinner families reflects changes in attitudes about the roles of men and women, we might expect a strong regional pattern, as some areas of Canada might embrace attitude changes more quickly than others. The figure below shows this isn’t so—the proportion of families with female breadwinners is roughly the same across Canada. 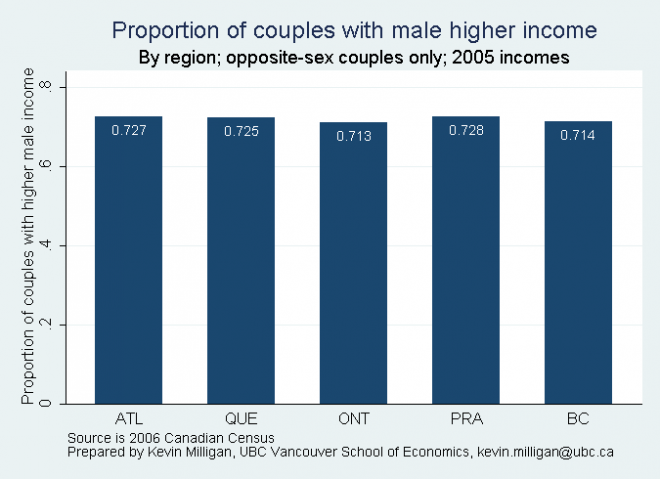 The shifting attitudes could also be occurring across age cohorts. Younger Canadians may be more egalitarian in their views about work and family. As time goes by, the young displace the old, creating an increasing time trend reflecting the cross-cohort differences. It’s a nice hypothesis, but the data doesn’t seem to support it. There is almost no discernible age pattern in families with female breadwinners. 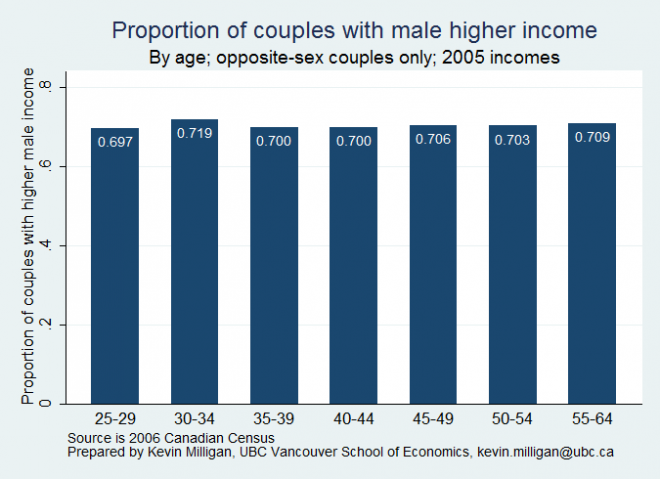 The best clue for the source of the rise of the female breadwinner comes from splitting the data by the education level of the female partner. Here there’s a solid trend: Women with a Bachelor’s degree or higher are more likely to live in a female breadwinner family than those with lower levels of education. (Readers interested in delving deeper into this can look here for the two-way cross-tabulation of breadwinners by male and female education.) 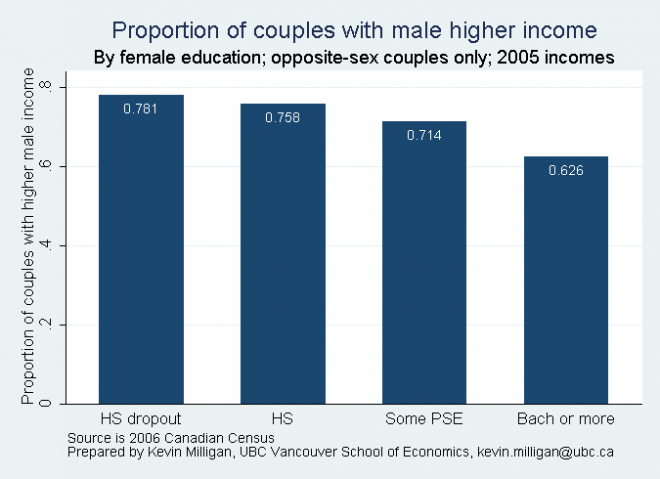 The past few decades have been good for female earners, especially those with more education. In general, people in jobs requiring “cognitive non-routine” skills have done much better than those in jobs needing “manual routine” skills—and women are more frequently found among the first category of jobs. Between 1976 and 2010, the median yearly earnings of men with full-time jobs barely moved at all while the median earnings for females jumped by over 25 per cent. This may go a long way in explaining why we have seen such growth in female breadwinner families. Female median wages have increased; male median wages have not. Females still earn less (more on that here—which opens a pdf), but the gap is closing. 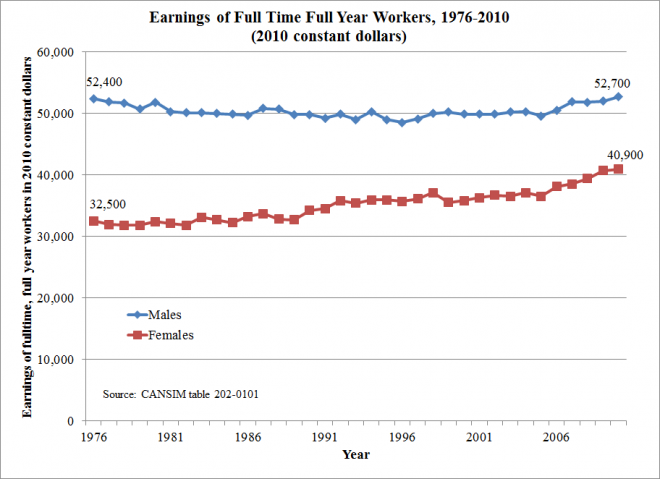 I suspect few Canadians see female breadwinner families as a “problem” to be “solved.” Still, this new reality does have policy implications that cannot be ignored.

First, the incipient discussion on introducing income-splitting for our tax system almost always assumes—on both sides of the debate—that the lower earning spouse is a woman. As shorthand, this might have been acceptable when the ratio of breadwinners was 92-8 per cent in favour of men. But as we approach a male-female breadwinner split of 70-30 per cent, it’s time to set this assumption aside.

Second, the stagnation of male earning power is a further reminder of the important structural changes underlying the broader trends in income inequality. Too much of the discussion has focused on high income taxation. Whatever the merits of taxing the top one per cent a bit more, the bigger and more important structural challenge for our economy is to restore male earnings growth to the pace seen by females. It is great that women have done well economically, and it is interesting that this changes the balance of family economics, but it is troubling that economic growth has left so many men behind.