What's the big deal about the new securities regulator, anyway?

As Maclean’s John Geddes reports, the federal government has put together the foundations for what may become a de facto – if not de jure – national securities regulator. Since the federal government doesn’t have the legal authority to impose its will over the objections of the provinces, it has decided instead to persuade the provinces to collaborate. Ontario and British Columbia may be only two provinces, but they may provide enough of a critical mass to absorb the other provinces over time.

Many may be wondering why the project of a national securities regulator is worth so much time and effort on the part of policy-makers. After all, the lack of a Canadian national regulator didn’t seem to be a significant obstacle in managing the financial crisis of 2008-9, and the presence of a national regulator wasn’t enough to prevent the US financial meltdown. But there are at least two very good reasons for preferring one single regulator over a patchwork quilt of provincial regimes.

The first is that financial markets work best when they are large and deep. One of the biggest advantages that US firms enjoy is access to the largest and deepest capital markets in the world, and policy-makers around the world would very much like to provide similar environments for their entrepreneurs. Indeed, one of the strongest arguments in favour of the euro project was the possibility that it could produce a continent-wide capital market on the scale found in the US. (It wasn’t enough, of course.) Canada’s capital market is not large by world standards, and segmenting it further by province makes very little sense indeed.

The second is the very real perception that Canada’s markets are dominated to an alarming extent by insider interests. Stock exchanges are often compared to casinos, but all casinos know that they cannot survive without an impeccable reputation for honest play. Small markets are especially vulnerable to manipulation, and there is evidence that Canadian markets are not immune. A paper (ungated pdf available here) by the University of Alberta’s Randall Morck offers a vivid illustration: 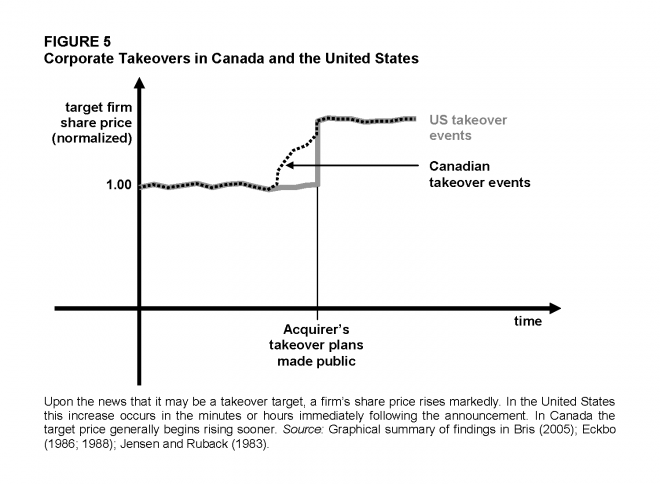 Firms need capital, and it’s hard to raise capital in a market that has a reputation for being rigged. I don’t know if a national securities regulator will significantly improve matters, but it is definitely worth the effort to try.