Why a B.C. First Nations chief took her fight to the Kinder Morgan shareholders' meeting 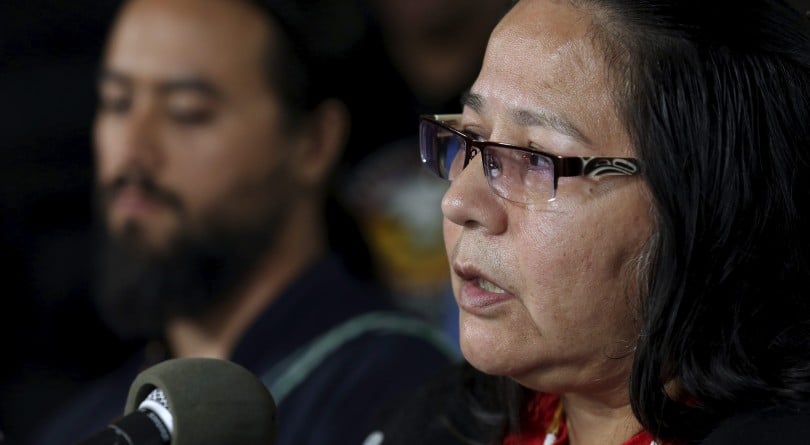 A new blow to the Trans Mountain pipeline expansion landed this week about 4,000 km from Burnaby, B.C., the site of the pipeline’s proposed terminus and the largest protests against the project. In Houston, at Kinder Morgan’s corporate headquarters, the New York State pension fund successfully led a shareholder push for the company to issue an annual sustainability report assessing the firm’s risks on legal, environmental and other fronts. Presenting the motion to Kinder Morgan shareholders was Chief Judy Wilson of the Neskonlith band (Secwepemc Nation) in the B.C. Interior—one of the staunchest opponents of the project to bring more Alberta bitumen over traditional First Nations lands to B.C. coastal ports. She spoke with Maclean’s writer Jason Markusoff.

Q: What was it like to deliver your message in Houston? How do you think it resonates there?

A: When I went to the Kinder Morgan building in downtown Houston, they had security at every level and at every turn. They escorted us into the room. I expected it to be quite a large room. It was a small room, I’d say maybe 30 or 50 chairs set up theatre-style and there was a podium. (CEO) Rich Kinder was was chairing the meeting. I stood up and presented our proposal. I was cut off at one point but I just kept reading because the chair did introductions before my presentation, and I was really clear with him: you took up my time with those introductions. I’m just going to keep reading. At the end, Rich Kinder the chair relayed that a majority of shareholders did accept the sustainability reports and I was really happy to hear that. I wasn’t expecting that because when (other Indigenous leaders) went down in previous years they didn’t accept the resolutions they were putting forward.

Even after the meeting ended, shareholders were coming up to me, some were quite saddened, tearful. They wanted to learn more, understand more. I invited them up to our communities to see first-hand what’s happening with regards to the pipeline, how it impacts us.

Q: This whole process has been simmering a long time, with controversy, protest, political debate, hearings, National Energy Board approval conditions and more. What do you think Kinder Morgan still hasn’t factored into its decision-making on this pipeline?

A: I still don’t think they’re factoring the risk of inherent title and rights. I don’t think they understand it doesn’t matter what the federal or provincial government does. They can’t impact on our rights that way. When some of the communities say no, they don’t have the consent. And I went right up to the CEO, to the chair, right after the meeting and I said you don’t understand what I’m saying. He said, yeah we do. We had 38 bands signed [Ed note: Kinder Morgan says 43 Indigenous groups in B.C. and Alberta have signed benefits agreements]. And I said, you don’t understand that when even one community says no, that means no. You do not have that consent. He said oh thank you for your observation and walked away. That tells you immediately the mentality of the CEO and the administration there. I think they’re not fully accounting for that risk.

Q: If Kinder Morgan reacts dismissively to this motion, what then was the benefit of heading down there are passing the resolution?

A: The Kinder Morgan chair said toward the end, when he announced it was passed by a majority of shareholders, that our board of directors will take that under advisement. I thought if he was going to try to dismiss it, there’s other steps the shareholders could take, even to the point of removal of the board of directors or chair. So I hope they’re informing themselves. Because there’s a majority vote of shareholders; they’re taking it seriously, and Kinder Morgan’s CEO and board needs to take it just as seriously.

Q: This is a fight on many fronts. Shareholder activism, protests on Burnaby Mountain, civil disobedience like the Tiny Houses, provincial political pressure from British Columbia, and the court battles. What do you believe provides the best chance to defeat the Trans Mountain expansion?

A: It’s the proper title holders. The people hold the inherent title and rights collectively. Nothing can really impact that. That’s where I think the strongest defence is. Our courts have been making decisions; we’ve had over 150 court-case wins. But they take time and money.

Q: What, in your view, marks the difference between a B.C. First Nations chief who vows to stop the pipeline and one who signs a mutual benefits agreement with Kinder Morgan?

A: I hope you realize as a writer that’s been around and researched these issues that taking some people and just placing them on 0.2 per cent of their land displaces them. You’re taking us from how we used to govern our economy, how we survived. That limits us from a true economy, and (now) it’s disrupted by another economy. Our communities are under duress, so when some big company comes with $1 million or $10 million, that’s a lot of money to our communities, so they cave. The tradeoff to me is not worth it. And I realize some are saying it’s important to jobs, important to the economy. It will provide essential services to our people. But the the tradeoff is we have this land and our inherent title and rights collectively, and if we did that together, imagine what would happen.

The Indian Act chiefs, their jurisdiction is on the federal reserve. Under my role as the Indian Act chief, my jurisdiction stops and the end of the federal reservation, which is 0.2 per cent of the [total traditional] land, and in my particular territory it’s 0.1 per cent of the territory. They can have 100 benefit agreements, but they only pertain to the reserve land because these chiefs can’t say they hold title to the territorial lands.

Q: Prime Minister Trudeau says he’s determined to get this pipeline built, and may financially backstop or invest in the project. What difference will that make?

A: He might invest $7 billion to $10 billion of Canadian taxpayer dollars. I don’t think he’s done his proper research in any way shape or form, on inherent title and rights issue, nor the financial issue at hand. For me, it’s trying to show or impose that the federal government can push this through. And I’m saying no: they can’t impose it, because they don’t hold that standing to put that pipeline through our territorial land. Our people are saying no: they don’t want this pipeline. They never wanted the first one that was built in 1951, nor do they want this proposed tar sands pipeline.

MORE ABOUT THE TRANS MOUNTAIN PIPELINE: