No drinking, no weapons, and no public displays of affection are allowed. How fun can that kind of slumber party really be? 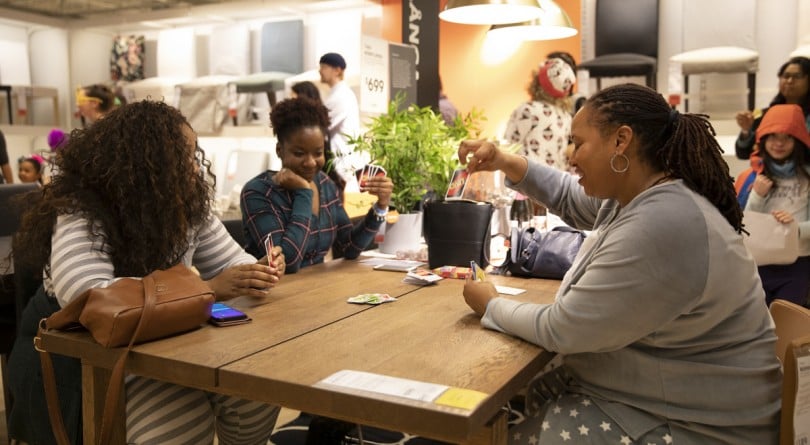 By offering slumber parties to shoppers, Ikea transforms a problem into an opportunity (Ikea Canada)

A few years ago, stowaways in Ikea showrooms were becoming a massive problem for the Swedish furniture giant. The YouTube video “Two Idiots at Night in Ikea” had gone viral, sparking the “24-Hour Challenge” trend, in which brazen teens would hide in showrooms, hoping to stay overnight (or at least until security spotted them and called the cops). Ikea sternly warned pranksters that their game constituted trespassing, that they’d be prosecuted if caught and that—really—any fun from illicit camping was “overrated.”

Internally, though, the marketing brains at Ikea must have seen an opportunity. Last fall, the company began kicking around the idea of a sanctioned, legal sleepover. It had done similar events on a one-off basis in the U.K. and Australia, but Ikea Canada is the ﬁrst to expand the sleepover nationally; 11 stores from Richmond, B.C., to Halifax hosted events on the same night. Lauren MacDonald, the chain’s Canadian head of marketing, won’t admit the stowaways served as inspiration—to hear her tell it, it’s all part of a campaign to promote healthy sleep habits. But the gimmick raises a meaningful commercial question: Can illicit thrills be harnessed and repurposed into legal marketing opportunities?

The chain already works hard to provide what advertisers call an “experiential shopping experience,” assembling attractive, cozy rooms to lure customers away from their computers and into brick-and-mortar stores. Other retailers like Sears had tried and failed at this task, while the survivors fought for slices of key sectors like the mattress business—more competitive than ever with newly popular bed-in-a-box mattresses like Casper and Endy. Ikea’s sleepover event promised a next-level experience—“a dream come true,” as MacDonald put it, for devotees of the iconic shop. Two hundred ﬁrst-come-ﬁrst-served spots across Canada were ﬁlled within 24 hours.

At 9 p.m. at Ontario’s North York store, regular shoppers are still waiting to pay for their purchases before the doors lock. Upstairs in the cafeteria, a luckier few have gathered for cinnamon buns and further instructions. A map marks unique activity stations—at this store, guided meditation, board games and a sleep specialist; at other locations, karaoke, ghost stories, movies and midnight snacks. But mostly guests are keen to explore the eerily empty store. “It’s pretty cool but also a little bit creepy,” says Sharon Gee, one of the last daytime shoppers to leave before the festivities begin. “I’m glad I’m going home.”

Ten grand-prize winners are thrilled to stay—albeit nervously. Among them are a mother in a Dickensian sleep hat and her semi-embarrassed 22-year-old daughter; a pair of girlfriends in luxurious loungewear and purses crammed with Korean sheet masks; and a newlywed couple who have left their toddler with Grandma so the stayover might double as date night. Melissa Roberts, a 22-year-old OCAD U student, has invited along a friend from school, while Lorne Mamchin, 26, has brought his new girlfriend for what might set a new standard for odd dates.

What they have in common, besides yellow wristbands, is an overnight-in-a-store fantasy based loosely on an old movie they can’t quite remember—Kim Cattrall in Mannequin, Jennifer Connelly in Career Opportunities and Natalie Portman giving birth in a Walmart were all cited as “just like” the event.

But making a movie trope real presents real-world problems. “We’ve of course done a whole risk assessment,” says MacDonald. “We want this to be a safe, regulated event.” Even the most chic of showrooms, after all, is just a showroom. There are no private quarters. The showers have no running water. Security is making rounds as guests sleep. Overnighters have signed contracts agreeing to refrain from using alcohol or drugs, to leave weapons and ﬁrearms at home and to forgo “levels of intimacy with others that are inappropriate in a public space.”

FROM THE ARCHIVE: Have we hit ‘peak stuff?’ Ikea says there’s röom to grow.

Any of the above would be a PR disaster, and the ﬁrst of any event is something of a social experiment. “Someone who works here said, ‘Good luck!’ ” recalls Roberts. “Um, what does that mean?” If they don’t get their top bedroom pick—winners will run to their preferred beds, Hunger Games-style—Mamchin has comforted his date with a backup escape plan: “Hey, my car’s here. We’re allowed to go . . . I think.” (They are, though leaving early would mean forfeiting the free pillow and sheets he slept on, along with his morning swag bag.)

Anything-can-happen jitters brought on by breaking your regular bedtime routine are, of course, the whole point of any sleepover. “Slumber parties are never about sleep; they’re about the party,” says Vancouver’s Rob Finkelstein, VP of Proof Experiences, which specializes in experiential marketing. To declare an event successful, he explains, “we look for results that are meaningful, memorable and measurable.” The pyjama party certainly satisﬁes the ﬁrst two criteria, but if results are measurable, Ikea’s keeping them to itself.

More interesting is the company’s attempts to transform an external problem into an internal marketing strategy. “If they’re playing off and amplifying and building off a pop culture moment,” says Finkelstein, “I would say it’s brilliant.” But just like parents crashing a slumber party, Ikea’s bid to co-opt the 24-Hour Challenge into a supervised, sober, ultra-safe sleepover (they actually handed out sleep masks and left the lights on) is certain to suck the fun out of sleepovers for pranksters.

Or, to the company’s chagrin, it might make the forbidden version all the more appealing.