Canada's stock market collapse is like nothing we've ever seen before 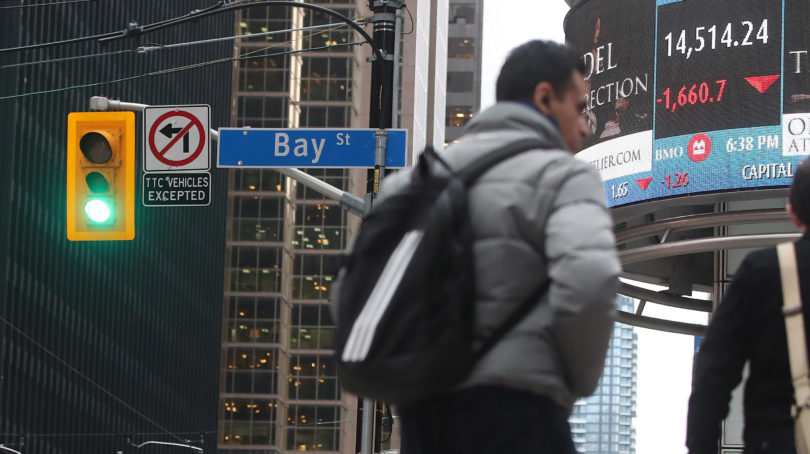 TORONTO, ON- MARCH 9 - All the world markets including the Toronto Stock Exchange (TSX) suffered huge losses at concerns over COVID-19 (coronavirus) begin to increase in Toronto. March 9, 2020. (Steve Russell/Toronto Star via Getty Images)

It can be difficult to comprehend the scale of the wealth destruction seen over the past month on global stock markets. Each plunge has come with a comparable statistic — “Worst one-day decline since [insert date here]” — but to understand what’s happened it helps to step back and see how the Covid-19 crash compares to past market collapses.

Simply put, we’ve never seen anything like this before.

The chart uses monthly data for the Toronto Stock Exchange going back to the 1920s, and looks how how stocks performed relative to the peak prior to each crash. In additional to the current sharp downturn, illustrated in red, the other market crises included are the 2008 Great Recession, the collapse of the dot-com bubble, Black Monday in 1987, the 1981 recession, the oil shock of 1973 and the 1929 stock market crash. The chart covers 33 months, which was how long it took for Canadian stock prices to reach their lowest point after the 1929 crash.

As the chart shows, no crash has been as sharp and as deep as what we’re seeing now. To date more than $1 trillion has been wiped out from Canadian stocks as the S&P/TSX Composite Index tumbled by one-third since Feb 20. Circuit breakers put in place to calm panicked investors by halting trading when markets drop precipitously have triggered multiple times, yet markets have continued to fall. Even dramatic rate cuts by central banks, including the Bank of Canada, have failed.

There have been some calls for stock markets to be put on ice until the panic passes. That’s what happened after the Sept. 11 terrorist attacks — U.S. stock exchanges didn’t open again until Sept. 17. American markets also closed during Hurricane Sandy in 2012.

MORE: The Dow fell below where it was when President Trump first tweeted about the stock market in 2017

So far, that idea hasn’t taken hold. John McKenzie the interim chief executive and chief financial officer of TMX Group, which owns and operates the Toronto Stock Exchange, said it a message on the company’s website that he believes markets should remain open. “The markets are functioning well and doing what they are designed to do: provide investors with liquidity and ensure issuers have a world-class venue to raise capital,” he said. “We pledge to continue working with all our partners to ensure that remains the case and will share any further updates as necessary.”

Far from reassuring investors, a market shut down could signal further panic by officials, in the same way that emergency rate cuts by the Federal Reserve seemed to worsen the market rout.

Nor can anyone say at this point how long the Covid-19 crisis will last, or how bad the situation could get. The longer markets were closed in such a scenario, the more detached they would get from reality. If the situation on the ground had deteriorated, then anxious investors might panic sell out of fear of another shutdown and having their assets frozen, making the crash even worse than it might have been without the halt.

Thursday brought some respite, with the S&P/TSX scraping back some of its recent losses. But the end of pain for global stock markets is far from certain. We already know the economic devastation from the widespread shutdown will be immense. A new report by Deutsche Bank predicts a severe global recession will occur in the first half of this year.

If a recession happens again on the scale of the 2008 financial crisis, stocks could have further to fall. In that downturn Canadian stock prices ultimately fell 45 per cent over a nine-month period.