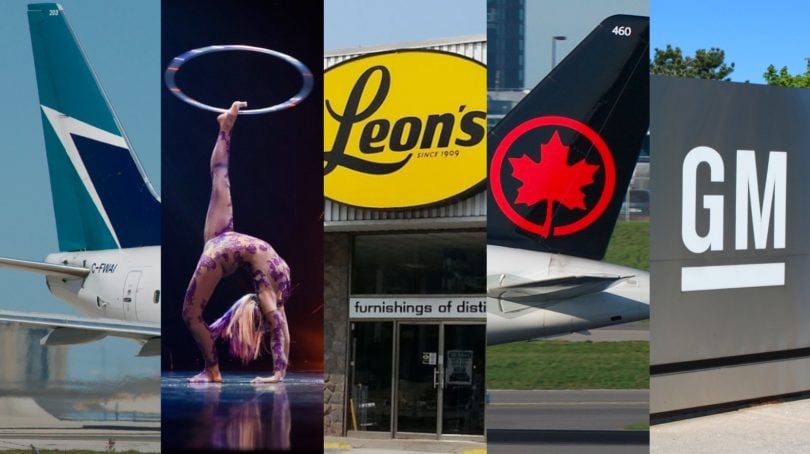 Companies have laid off thousands of workers in the wake of the COVID-19 shutdown. (Wikimedia, Google Street View, Cirque photo by Derek Key)

The dramatic measures taken by governments and businesses to slow down the spread of COVID-19 has created a tidal wave of layoffs in Canada and around the world. In March employment fell by more than one million, according to Statistics Canada, while April is expected to bring millions in additional lost jobs.

As of April 28 Service Canada had received applications from 7.3 million Canadians for federal aid through the Canada Emergency Response Benefit. So far, $25.6 billion has been paid out. Both figures are set to climb. A report released by Statistics Canada found one-in-five Canadian businesses had laid off more than 80 per cent of their staff.

We’re tracking the layoff announcements as they come in. The list below is drawn from media reports and press releases announcing major layoff, and we’ll be updating the list as new job cuts are announced across the country in the coming days, weeks and perhaps months. The vast majority have been described as temporary layoffs.

READ: What to do if you’re laid off because of the coronavirus

It’s important to note that this is far from a comprehensive list. Many thousands of small and medium-sized businesses have been forced to close their doors and hand out pink slips to workers, and the vast majority of those cases don’t make the news. A survey by the Canadian Federation of Independent Business, which represents 110,000 small- and medium-sized businesses, found one-third of businesses fear they may close within a month without financial assistance.

If you’re aware of a big layoff announcement that’s not on this list, send us an email and let us know.

Roughly in order of when they were reported

Calgary Stampede: The Greatest Outdoor Show on Earth temporarily cut 900 staff, or 80 per cent of its workforce.

General Motors: Announced all production will be suspended, impacting 4,000 jobs.

LNG Canada: The company behind liquified natural gas project in Kitimat, B.C. laid off 750 workers, half its staff.

Porter Airlines: Suspended all flights and laid off most of its 1,400 workforce.

Cirque du Soleil: Quebec circus entertainment giant suspended all shows and lays off 95 per cent of its workforce, or 4,679 people.

Irving Shipbuilding: Suspended operations at its Halifax shipyard and lays off 1,370 workers.

Air Canada: The carrier said on March 20 it would lay off 5,150 flight attendants, followed by a decision to put 600 of its 4,400 pilots on unpaid leave. On March 30 Air Canada said it would lay off an additional 16,500 employees effective April 3. UPDATE: On April 8 the Toronto Star reported the company will rehire 16,000 workers by taking advantage of Ottawa’s 75 per cent wage subsidy.

Banff Centre for Arts and Creativity: Temporarily laid off 400 staff, about 75 per cent of its workforce.

Stratford Festival: Laid off nearly 500 employees after cancelling all shows until May 2.

Freshii: Restaurant chain closed all locations and lays off “hundreds” of employees.

READ: What the Canada Emergency Wage Subsidy means for workers hurt by Covid-19

Cineplex: Theatre giant laid off all part-time staff, roughly 11,000 jobs, some of whom are hired by Sobeys grocery chain to meet demand.

Transat: Airline laid off 3,600 staff, about 70 per cent of its workforce.

Airbus: The French aircraft manufacturer laid off 1,400 workers, half its workforce in Mirabel, Que where it builds the A220 aircraft.

Leon’s: Furniture retailer shut its Leon’s and The Brick stores and lays off 3,900 workers.

TC Transcontinental: Laid off 1,600 people in its printing unit.

Vancouver Aquarium: A week after closing its doors, laid off 343 employees, or 60 per cent of its workforce.

Resort Municipality of Whistler: Laid off 200 casual and auxiliary staff.

Boston Pizza International: Laid off half of its 192 corporate staff and said franchised restaurants have made similar cuts.

Calgary YMCA: Laid off 1,400 staff amid closure of all facilities.

Casinos Regina and Moosejaw: Will lay off 550 staff as of April 3.

Lush: Laid off an undisclosed number of employees at its 258 cosmetic stores across North America.

Province of Alberta: Redirected $128 million in education funding to Covid-19, forcing the lay off of more than 20,000 support staff life substitute teachers and educational assistants.

Reitmans (Canada) Ltd:  Laying off 90 per cent of its retail store employees and 30 per cent of head office staff. Reitmans has 7,000 employees in total.

Palliser Furniture: The Winnipeg company laid off 72 per cent of its workforce, or around 2,200 employees.

City of Edmonton: Will lay off 2,000 non-essential staff including recreation and library employees as of April 14. Update April 27: Laid off 900 more staff.

City of Calgary: Will lay off 1,200 part-time and casual staff, though exact numbers haven’t been made public.

City of Regina: Laid off 360 casual employees and postponed the recall of 500 seasonal jobs.

Mullen Group: The oilfield services and trucking company expects to give short-term lay off notices to half its 6,100 workers.

Canada’s restaurant industry: A survey by Restaurants Canada of its members found 800,000 restaurant jobs have been cut since March 1.

Ritual: The food ordering and pickup app laid off half its staff, or around 200 workers.

City of Vancouver: Laid off 1,500 employees, mostly at community centres, theatres and libraries.

City of Guelph, Ont.: Laid off 600 casual and part-time employees.

City of Mississauga, Ont.: Laid off 2,000 part-time and non-essential employees.

City of Thunder Bay, Ont.: Laid off one-third of its workforce.

Mogo: The Vancouver fintech laid off 30 per cent of its staff, or around 80 people.

City of Delta, B.C.: Laid off 500 employees from its parks and recreation and infrastructure departments.

City of Surrey, B.C.: Laid off 2,000 employees, including recreation and library staff.

BC Ferries: Cancelled all routes and laid off 1,400 staff. Update April 14: The company has rescinded the layoffs while determining if it qualifies for Ottawa’s emergency wage subsidy.

Vancouver Bard on the Beach festival: Cancelled its 2020 season, resulting in the loss of 240 jobs.

Torstar: Publisher of the Toronto Star eliminated 85 positions amid a collapse in ad revenue.

City of Kitchener, Ont. Laid off 842 casual and part-time workers.

Organigram Holdings: Cannabis producer laying off 45 per cent of workforce, or about 400 jobs.

Royal Ontario Museum: Laid off half its 323 full-time staff and put remainder on reduced hours.

Canadian auto dealers: A survey by the Canadian Automobile Dealers Association of its members found 96 per cent have laid off employees. Of 862 dealerships that responded to the survey, 76 per cent had laid off 10 or more people, equal to at least 6,500 jobs.

City of Winnipeg: Laid off close to 700 workers.

City of Gatineau, Que.: In second round of job action it is laying off 160 employees, bringing its total to more than 700.

Burnaby, B.C.: City laying off 1,500 workers in the parks and recreation department.

Shaw Communications: Laying off 10 per cent of its staff, or around 1,000 people.

TransLink: The Metro Vancouver transit authority is laying off 1,500 workers.

Toronto Transit Commission: Laying off 1,200 employees over the coming weeks.

Vancouver Airport Authority: Announced an undisclosed number of layoffs of its 500 staff.

University of Saskatchewan: Announced an unspecified number of layoffs to begin May 4.

Resolute Forest Products: Will lay off 1,000 workers in Quebec.