Here's how much carbon pricing will likely cost households

Economist Trevor Tombe on what putting a price on carbon emissions will mean for people across Canada, and what provinces can do to lessen the impact

Canada’s federal government will soon require provinces to put a price on greenhouse gas emissions. The minimum price will start at $10 per tonne in 2018, and rise to $50 per tonne by 2022. The government has provided little information about the projected costs for the average Canadian household, so others have filled the gap. The Canadian Taxpayers Federation (CTF), for example, claims the average household will be on the hook for more than $2,500 per year. Many, including the interim federal Conservative Party leader Rona Ambrose, cite this estimate. Others point to lower costs. Saskatchewan Premier Brad Wall, for example, claims the average household will see costs of $1,250 per year.

What are Canadians to make of such dramatically different numbers? With many details of the federal policy still to be determined, it’s hard to be precise. But, if we consider a simple and broad $50 per tonne price on carbon, it’s possible to come up with some fairly good ballpark numbers.

Let’s start with why the $2,500 estimate is too large. In their analysis, the CTF applies $50 per tonne to Canada’s total projected emissions and divides this by the expected number of households in Canada in 2022. The trouble with this approach is that not all emissions can or will be subject to the carbon tax. Emissions from cow farts or leaky valves, for example, are not priced and alone account for over 10 per cent of Canada’s greenhouse gas emissions. When other emissions not subject to the tax are added up, only about 70 to 75 per cent  of emissions are will be priced, though each province is different. 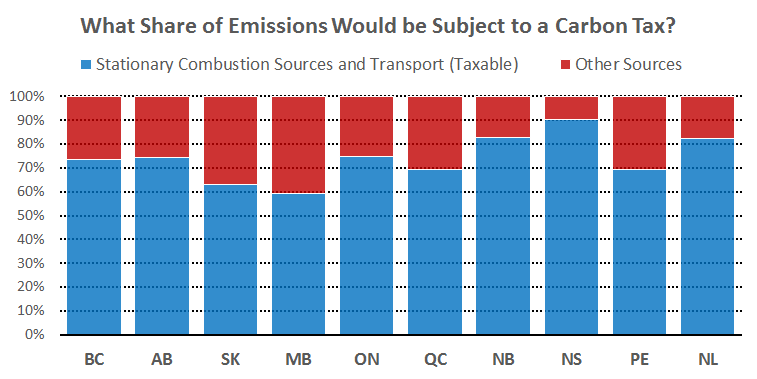 This alone shrinks the CTF numbers to closer to $1,800, but even this is too high. Not all of the burden falls on consumers, and some are passed along to foreign buyers of Canadian exports. Finally, it is critically important to consider how governments can use the revenue from carbon pricing to limit negative effects on household real incomes.

Let’s start with something easy, and visible: direct costs on households.

A carbon tax will increase the price of gasoline, fuel for home heating, and (in some provinces) electricity. The effect of this is fairly easy to quantify using data on gasoline spending, gasoline prices, electricity emissions intensity, and average household energy use. The average household uses about 2,000 litres of gasoline. A $50 per tonne tax adds 11.2 cents per litre to that, for a total cost of $224. To heat the average home, Canadians use just over 90 gigajoules of natural gas. The carbon tax adds about $230 per year to those costs.

As each province is different, I repeat this exercise for the typical household in each province, with the above data, and find: 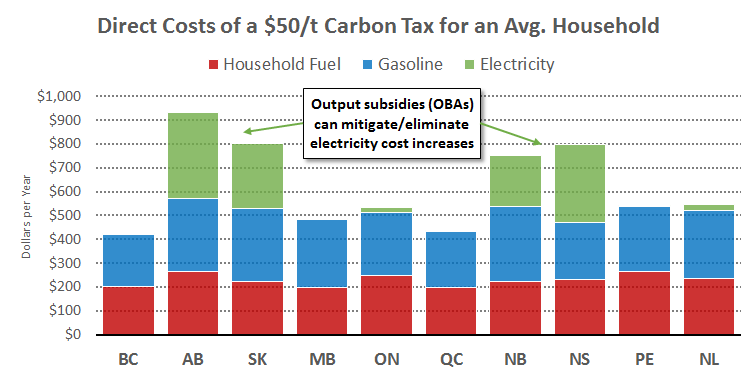 Overall, the cost of a $50 per tonne carbon tax is about $600 per year for the average Canadian household. To be sure, these figures are for the average household. The specific costs vary across households, as it depends on their consumption habits and many other factors.

Differences across provinces are also fairly large. B.C. and Quebec are notable for their low levels of fossil fuel use, while Alberta, Saskatchewan, Nova Scotia, and New Brunswick not only have higher home heating and vehicle gasoline use, but also have emissions-intensive electricity systems. It takes about 10 tonnes of greenhouse gases per year in Alberta to power a home using 1,000 kWh of electricity per month, while it takes just over 0.15 tonnes in B.C. Pricing carbon will therefore potentially affect electricity prices much more in some provinces than others.

But this need not be the case. Following the recommendations of University of Alberta economist Andrew Leach, the Alberta government opted to provide subsidies (output-based aid or OBA) to large GHG emitters in proportion to the production. These subsidies buffer the effect of carbon pricing on a firm’s average cost, and therefore mean electricity prices are not going to rise much (if at all) for Albertans. Other governments may adopt similar measures, which can eliminate the green bar in the above graph leaving overall costs of between $400 to $600 per household, depending on the province. (Side note: the OBAs don’t undermine the incentive effect of carbon taxes, as the subsidies aren’t a function of emissions. Firms still save money for each tonne of emissions abated when they adopt a new technology or technique.)

Higher transportation and heating costs also affect businesses. With higher costs, prices of even non-energy products are likely to increase. These create “indirect costs” to households, and they are difficult to quantify. Much depends on how firms pass cost increases through to consumers—and evidence on this as it relates to carbon taxes is incomplete. From detailed analysis by University of Ottawa economist Nic Rivers (in this research paper) the effect of a $50 per tonne carbon tax on the price of various goods is roughly illustrated below: 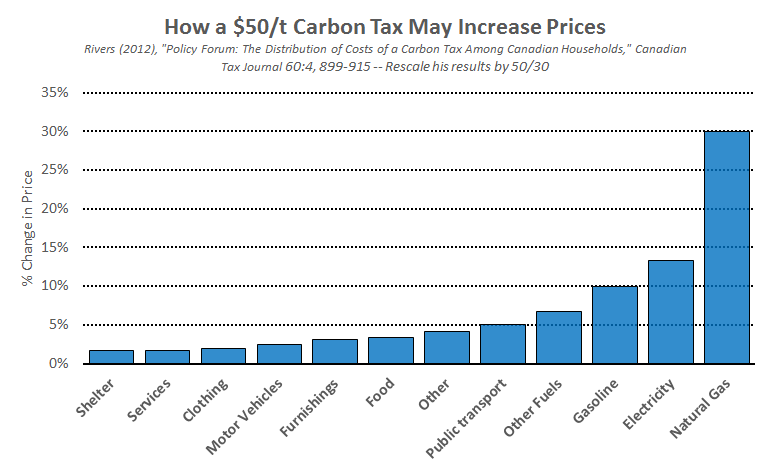 So it is true that goods and services will become more expensive, but this effect is fairly small—only a few per cent for most non-energy items.

To add up these costs isn’t trivial. On the low end, one can point to Alberta government estimates and project indirect costs of around $100 to $200 per year for a typical household. For a higher estimate, consider two data points. First, the OECD reports that 415 megatonnes of emissions are produced in Canada and purchases by households and business in Canada (that is, not exported). Second, Statistics Canada reports about 410 million tonnes of GHGs are produced in Canada and consumed by households as final consumption or by business as a capital investment. Quite consistent. So, with these two sources in mind, if 70 per cent of emissions are priced (which is roughly the case), then total costs per household is just below $1,100 per year. With direct costs averaging close to $600, from before, that suggests indirect costs are about $500 per year.

More precise estimates would require careful data work and modelling that is sure to come. But we can be fairly confident that indirect costs for the average household are smaller than direct costs. And for further context, $1,100 per year is less than 1.5 per cent of average household spending.

In any case, it seems clear Premier Wall’s estimate of the cost is very close to the mark while the CTF number is at least twice what the average household will experience. Neither estimate, though, accounts for the options governments have to mitigate these costs. 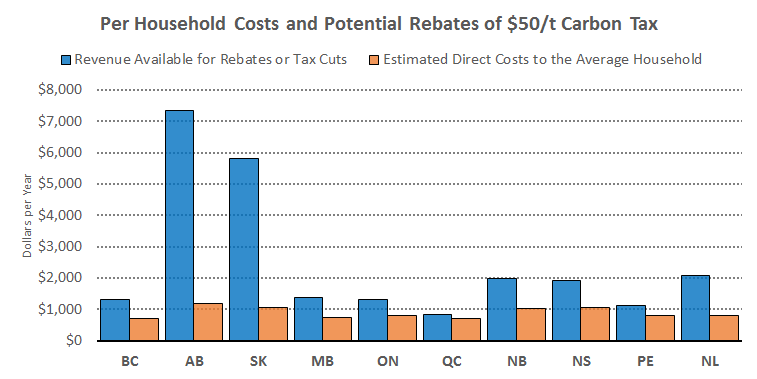 Different governments will choose different ways of using revenue from carbon taxes. The B.C. government is committed to ensuring the tax is revenue neutral. By lowering other taxes, the province ensures pricing carbon is not the tax-grab that many suppose it is. In the neighbouring province of Alberta, we see other choices. There, the government will return most of the carbon revenue as subsidies to large industrial emitters and rebates to low-income households, but will spend the rest (see page 6 of the 2016 Budget.)

Interested readers should explore this comprehensive report by Canada’s EcoFiscal Commission on the pros and cons of various options available.

In the following table, I compare the revenue each province might expect from a broad $50 per tonne carbon tax with various potential uses of funds. One option gives rebates to everyone roughly in line with average direct costs. Another provides smaller rebates in line with B.C.’s, and only to adults in the bottom half of the income distribution (I scale up B.C.’s credit to $200 to reflect the higher carbon price of $50). A third option provides rebates to large industrial emitters. As in Alberta, I presume roughly three-quarters of carbon taxes raised from large emitters are returned via OBAs. Finally, I look at the cost of lowering personal and corporate income taxes by 10 per cent. (That is, lowering income tax revenues by 10 per cent; determining the precise rate changes to do this is complex.) 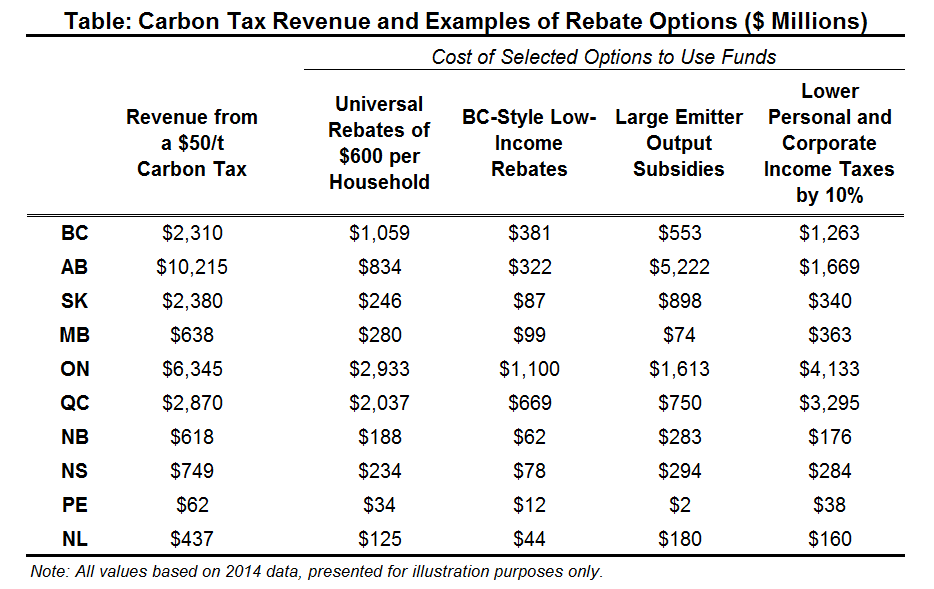 Some provinces will generate so much revenue that there are many recycling options available. In Saskatchewan, for example, the government will bring in nearly $2.5 billion—more than enough to provide rebates to large emitters and low-income households, and still have enough left over to cut personal and corporate income taxes by 40 per cent! Of course, as emissions decline gradually over time, the revenue side of this equation will shrink and governments would then need to roll back some of these measures. But that is many years down the road.

This does make clear that for those concerned that a carbon tax is just a tax grab, there are many recycling options available that do not enlarge the size of government. In particular, provincial governments should strongly consider rebates and lower personal and corporate income taxes.

There is certainly large scope for disagreement about how best to use carbon revenue. For the strongest case in favour of “revenue neutral” carbon taxes, see this report by University of Calgary economist Ken McKenzie. But governments may also opt to spend the money. For perhaps the strongest case in favour of this approach, see this piece by Vox author David Roberts.

Either way, this debate is separate from the issue of carbon pricing itself. Opposing carbon pricing because one disagrees with how the money is used misses the critical fact that regulations and other command-and-control approaches have far higher economic costs than carbon pricing, and no revenue is available to offset those costs. If we’re interested in addressing our greenhouse gas emissions in the least-cost way, then carbon pricing is the way to go.

Trevor Tombe is an Assistant Professor of Economics at the University of Calgary, and a Research Fellow at the School of Public Policy
FILED UNDER: carbon price Editor's Picks greenhouse gas emissions