To balance Ontario's budget without a carbon tax, the PCs will need deep cuts to spending and jobs

Analysis: If we assume the Tories will make up any carbon tax revenue shortfall through spending cuts, rather than running a deficit, here's what those cuts could look like 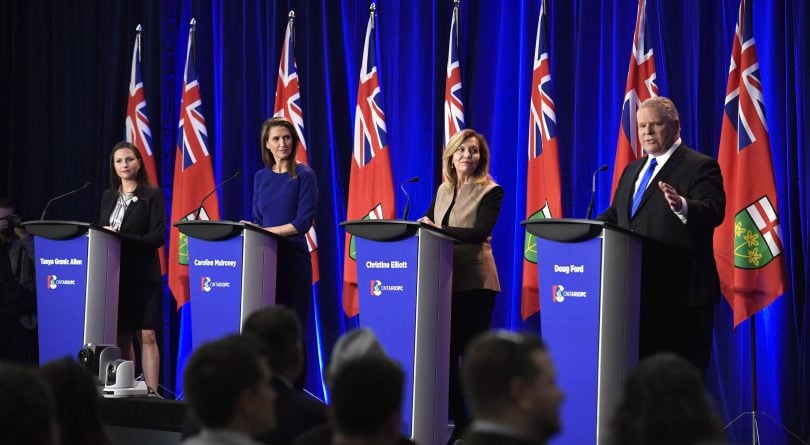 Mike Moffatt is the director of research and policy at Canada 2020, an assistant professor at Western University’s Ivey Business School, and co-owner of Nexreg Compliance, an exporter of services to the chemical industry.

What would it take for the Ontario Progressive Conservatives to balance the budget, now that every leadership candidate has vowed to scrap their planned carbon tax? The answer: axing the $1.9 billion per-year of investments in the Greenhouse Gas Reduction Account (GGRA, or as the Tory platform calls it, the “Liberal Cap-and-Trade Slush Fund”) and cutting roughly 40,000 jobs from the public service.

There were two broad criticisms of my piece Scrapping carbon taxes leaves a gaping hole in the Ontario PC platform. The first was that the Tories cannot actually scrap carbon taxes, since the federal government will simply collect them on behalf of the province, so the whole debate is academic. However, PC leadership candidates have vowed they will not allow the federal government to do so, a claim that I believe we should take seriously. Seeing as I am an economist, not a constitutional law expert, I will leave the analysis of the viability of this option to others.

The second is that my piece should not have assumed that the Tories would run a deficit to meet the shortfall, rather they would almost certainly cut spending to balance the budget. My intent was not to predict what the Tories would do, rather it was to examine their options. Economically speaking, a $2.8 billion deficit in a province the size of Ontario is easily sustainable, giving the Tories a straight-forward fiscal way of dealing with a lack of carbon tax revenue.

But let’s instead assume that the Tories will not run a deficit, but make up any revenue shortfall through spending cuts. Using the estimates from their platform and removing carbon tax revenue, here is the fiscal landscape in the final three years of their mandate:

Between the “Value for Money” cuts and the projected shortfall, a Progressive Conservative government would need to cut $6.4 billion of spending in fiscal year 2021-22, on top of removing the $1.9 billion of spending from the GGRA. To put that number in perspective, the Ontario government is projected to spend $136 billion on programs in fiscal year 2019-20. There is no spending projection for 2021-22, but seeing as Ontario government program spending is growing by roughly $3.5 billion per year, we can reasonably assume program spending would be roughly $143 billion before the cuts.

A spending cut of $6.4 billion in a budget of 142.8 billion represents 4.5 per cent of projected 2021-22 program spending. To date, no leadership candidate has indicated what the Tories would spend less on. The Ontario government pays for everything from ambulances to paperclips to teacher salaries, so without additional information it is hard to know how such spending cuts would affect Ontarians, in terms of services and jobs.

In the absence of any additional information, one reasonable approach would be to simply assume that the government would reduce purchases of everything by 4.5 per cent. Most of what the Ontario government purchases is services; the services of nurses and teachers and doctors and university professors (of which I am one). In 2011, the Ontario government employed the services of just over 800,000 workers, with another roughly 300,000 working for municipal governments; many of those municipal workers are offering services funded by provincial governments. Unfortunately the government of Canada stopped collecting data on provincial government employment in March 2012, so obtaining more up-to-date data is difficult (Statistics Canada can tell us that in January 2018, 1.32 million Ontarians worked in all levels of government, but it does not break it down by level). Historically employment in the public service grows at one to two per cent a year; assuming a one per cent growth rate from 2011 to 2021-22 would see approximately 900,000 people working for the Ontario government, and roughly another 350,000 working for municipal governments.

Excluding municipal workers from our discussion, a 4.5 per cent reduction in Ontario government employment translates to an employment reduction of 40, 500 jobs. Or put more precisely, in 2021-22 there would be approximately 40,000 fewer Ontarians working as teachers, nurses, doctors and university professors than there otherwise would be. This does not include any spin-off employment effects, any jobs lost at the municipal level, nor does it include any jobs lost due to the elimination of Greenhouse Gas Reduction Account.

Of course, this is a back-of-the-envelope estimate on the effects of spending reductions. The true number will be more or less than this, depending on the decisions made by a Progressive Conservative government. But in the absence of any additional information, this is a best estimate.