Rachel Notley's production caps raise a question: Was there ever a 'free market' for Canadian oil? 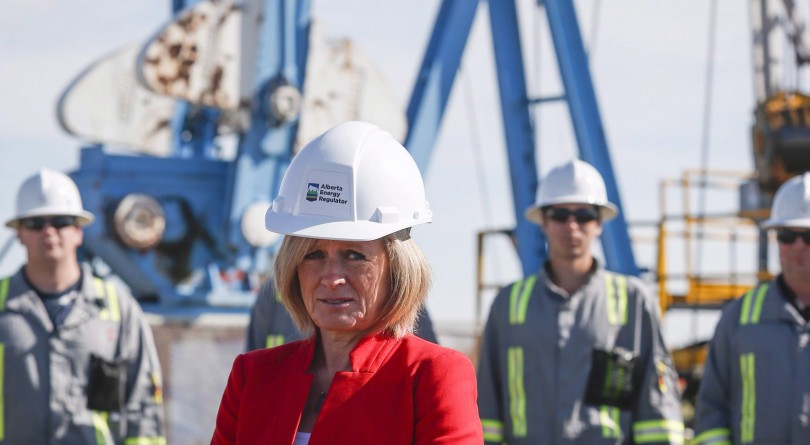 An NDP premier ordering production limits on private industry might normally bring widespread cries about government intervention, but not this week. The move announced Sunday by Alberta’s Rachel Notley to mandate an 8.7-per-cent holdback on oil extraction drew more praise than scorn, even from conservative rivals, because most agreed this was the only real short-term solution to a massive supply glut caused by a failure to build pipelines to move the product. Notley, as others did, reminded Albertans that they are owners of the province’s natural resources. That’s something not invoked too often these days in free-market-loving Alberta. But free-market-loving Alberta’s biggest private enterprise has felt the friendly or prickly hand of government involvement throughout its history—through direct control, subsidy and state ownership.

Let’s start with the Social Credit government of Alberta, a radical reform movement that took power in 1935 under the leadership of William “Bible Bill” Aberhart, who proposed to distribute “prosperity certificates” to residents outside of Canada’s existing currency system. Under populist control, the legislature passed a 1938 resolution to consider taking over the wholesale and retail petroleum markets to guarantee lower gasoline prices for consumers.

That didn’t happen, but the same year Aberhart’s government created the Oil and Gas Conservation Board, to tame the rapidly developing Turner Valley oilfield near Calgary with production quotas and a crackdown on flaring of excess gas, an expedient practice which was literally creating towering infernos of wasted fuel. “It became evident that some wells were being produces at rates that would soon ruin them and which would result in terribly small ultimate recovery as compared with what might be expected if production was restricted and carried out on the basis of orderly development,” the province stated, according to Prairie Capitalism: Power and Influence in the New West. A previous government unsuccessfully created a conservation board in the early 1930s, but this time opposition couldn’t hamstring it: in the 1940s, the Social Credit’s provincial regulator closed down wells that overproduced.

Later that decade came the gusher at Leduc No. 1 near Edmonton, confirming massive reserves and triggering a major development boom. Soon, Alberta was producing twice as much as pipelines could deliver. “By 1950 Alberta literally had oil coming out its ears compared to what it could consume or market to other parts of the country,” one official said in a history of the provincial regulator. The board imposed a system called “pro-rationing” that required companies to throttle back drilling to ensure companies collectively avoided a supply glut; sometimes limits were as low as 40 per cent of capacity. This quota system remained in place until it was greatly loosened in 1987.

When Ottawa acquired the Trans Mountain pipeline and the controversial expansion project from Kinder Morgan earlier this spring, the $4.5-billion purchase marked not so much a precedent as a return to government’s former role as the architect of Canada’s fossil fuel transmission system. During the Second World War, Ottawa even let a foreign entity—the U.S. military—build one pipeline from Norman Wells, N.W.T., to Whitehorse, Yukon, to serve the war effort’s fuel hunger via Alaska. In the 1950s, Parliament enacted federal charters to build the Interprovincial oil pipeline to Wisconsin, the TransCanada natural gas conduit to Quebec and the original Trans Mountain oil line to British Columbia. The government sanctioned investor groups to build the pipelines (Interprovincial is now Enbridge, an international giant alongside TransCanada). Meanwhile, Alberta built its own natural gas transmission system—government funds and a public share sale to residents financed the Alberta Gas Trunk Line. It was privatized in 1961.

In 1973, Arab countries proclaimed an oil embargo on several western countries, quadrupling the world oil price and setting to boil the simmering Canadian worries its oil supply was too heavily under foreign control, primarily by U.S. firms. Pierre Trudeau’s government created Petro-Canada as a Crown corporation in 1975, and it expanded by snapping up private firms. The company was widely hated in the oil sector and Calgary; its red granite headquarters became known derisively as Red Square.

The Alberta government, under Tory premier Peter Lougheed, also had ambitions to cut into the dominance of foreign oil companies and to maximize the value of Alberta’s resources for the public that owned them. In 1973 it launched the Alberta Energy Company, an exploration and production firm; the government’s half-stake supplemented by another Albertans-first share offering.

AEC was fully privatized in 1993 and later became part of Encana. Meanwhile, the federal government gradually sold off Petro-Canada between 1991 and 2004, and the company later got swallowed up by Suncor, another oil giant with a public ownership history.

After decades of both government nudging and private interest in the oil-soaked sands around Fort McMurray, Sun Oil of Pennsylvania spearheaded Great Canadian Oil Sands Co. (later Suncor) to develop the first major bitumen mine in northeast Alberta. Raising capital for the quarter-billion-dollar megaproject proved tricky, so the Alberta government in 1964 demanded a share sale that let provincial residents each invest up to $12,500 in the project. In 1981, then-Ontario premier Bill Davis wanted a piece of that action for his province, which bought a 25-per-cent stake in Suncor; it took Ontario’s NDP government to unload the shares a dozen years later.

In those days, Alberta seemed keen for the Ontario government to leap into its project investments if Ottawa or private players got cold feet. Suncor was in fact the second Queen’s Park purchase in Alberta’s oil sands: when a private consortium faced ballooning costs in the early ’70s to launch Syncrude, the second major bitumen player, Ontario swooped in to take a one-tenth share, and so did Alberta’s government, while Ottawa put in for 15 per cent.

RELATED: How to make Canada an energy superpower

Lougheed, meanwhile, used oil royalties to launch the Alberta Oil Sands Technology and Research Authority, a provincial R&D branch for the industry that helped spur today’s extraction methods of harder-to-reach bitumen. And in the early 1990s, when oil sands development needed its next big boost, the Alberta government and Liberal-led Ottawa again stepped in—not with investments, but with major breaks in royalty rates and taxes as projects began.

Before Trudeau and his National Energy Program (NEP, still a three-letter epithet out west; more on that shortly), there was former prime minister’s John Diefenbaker’s NOP of 1961. The National Oil Policy sought to ensure a domestic market for Alberta crude, so the government created a captive one: all refineries west of Ottawa were banned from foreign oil imports. A Royal Commission on Energy in 1957 had considered a broader domestic-only zone, aided by a possible Edmonton-to-Montreal crude pipeline. But Montreal and Atlantic refineries preferred retaining access to cheaper imports (to this day, Albertans grumble about the region’s reliance on Mideast and overseas supply.) The Energy East pipeline through Quebec to New Brunswick would have brought Alberta oil to the other side of Canada. But that project flamed out amid protest, daunting regulatory demands and shifting economics.

The NEP that Trudeau’s government dropped in 1980 wasn’t for Alberta oil sector’s benefit; it was to give the rest of Canada cheaper fuel and redistributed energy revenues. Among its meddling ways, the program mandated lower prices for Canadian customers, levied taxes on oil and gas exports and further supercharged Petro-Canada. Together with plunging oil prices and a global recession, these policies battered the oil sector and led to massive layoffs. Lougheed fought back with a jurisdictional court fight against the tax on a provincial resource—and won. But his flashier, more currently relevant move was using old curtailment powers to throttle back the industry’s provincial output by about 15 per cent, nearly double the cut Notley has announced. Within a year of the retaliatory measure, Lougheed got Trudeau to ease off the tax; under Mulroney in the mid-1980s, the NEP died. But it gets resurrected often when critics decry the currently ruling Trudeau’s attempts to balance energy development with environmental regulation.

Aside from his pipeline purchase, Justin Trudeau’s energy policy has been far more hands-off than those of his father or others—more standard government stuff like a carbon tax here, a pipeline approval cancellation there, regulatory oversight reforms hither and yon. But, his many western detractors say, all these smaller actions have led to the effective moratorium on pipeline construction that caused Notley to reach back into history and get heavy-handed.

CORRECTION, Dec. 7, 2018: An earlier version of this story referred to the former Petro-Canada headquarters in Calgary as red marble. In fact, it is granite.