Here's what the trade war has cost the U.S. and Canada so far

Jason Kirby: The two countries have collected $1.1 billion in duties—kicking themselves in the shin and passing on the pain to consumers 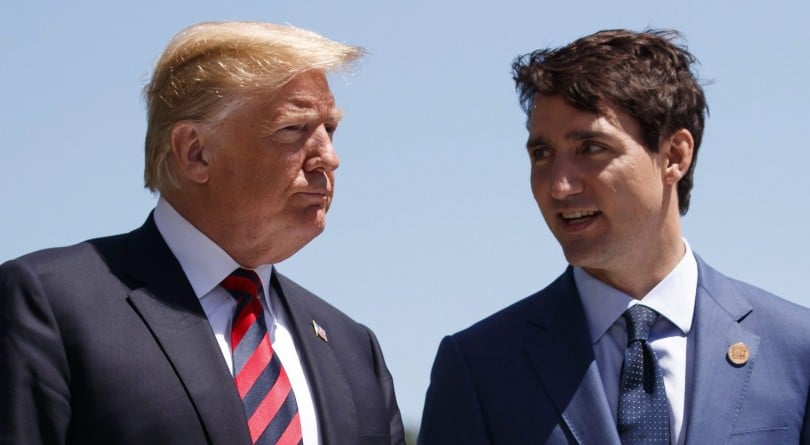 The early results are in from the trade war the U.S. and Canada are waging against each other, and so far, it’s more or less a draw: each country is punching itself in the face with the same relative dunderheaded force.

On Friday Statistics Canada released a study looking at the duties Canada has applied on imports since 1988. It offers some of the first hard numbers on how much each country has collected in duties since trade hostilities broke out. To date, the Trudeau government has kept mum on that—when Finance Minister Bill Morneau appeared before the parliamentary committee on international trade earlier this week, he had rebuffed requests to disclose how much Ottawa had collected in duties, acknowledging only that the sum was “significant.”

No kidding. Since the Trudeau government retaliated to the Trump administration’s hefty tariffs on steel and aluminum with its own sweeping set of duties on steel, aluminum and a sweep of other goods, Ottawa collected a combined $371 million in July and August, the most recent month included in the StatsCan analysis.

The agency also tallied up Washington’s haul after the U.S. dubbed Canada a national security threat: From June to August the U.S. collected a combined $713 million in duties. (All figures are in Canadian dollars.)

As a share of total imports, the punitive duties have had a similar impact in each country: Canada’s duties are equal to 0.8 per cent of the dollar value of goods imported from the U.S., while the corresponding ratio in the U.S. is 0.7 per cent.

Politicians like to pitch tariffs as a form of punishment against foreign nations—President Donald Trump claims he’s punishing Canada for “decades of abuse” while Prime Minister Justin Trudeau gets to claim his retaliatory tariffs are an eye-for-an-eye lesson against a bullying superpower.

Forget all that. The ones who really pay the price when a country slaps punitive tariffs on imports are its own citizens and companies, as higher duties get passed on to the end user consumer in the form of higher prices.

In other words, the collective $1.1 billion in duties collected by Washington and Ottawa are a massive tax on their own consumers.

The news will no doubt ramp up the pressure on the Trudeau government to funnel more of that money back to Canadian companies impacted by the trade war. Last month, reports shed some light on how much Ottawa was taking in, and funnelling out, by way of tariffs and relief payments. The Canada Border Services Agency had said it collected $286 million in July and August, but paid out just $11,184.35 under the duties relief program. A second assistance measure, the duty drawback program, had paid out nothing, while a third measure, a remission of surtaxes program, requires cabinet approval for each request. In his committee appearance this week, Morneau indicated 50 companies have been approved to date. A total of 135 had applied. It’s a murky process of picking winners and losers, something government is terrible at doing in the best of times.

The new figures also serve as a reminder that the USMCA trade deal hammered out last month failed to resolve the duty dispute—and that the tariffs are not likely to go away any time soon. Canada and the U.S. negotiators are still at it, with the U.S. demanding what the Canadian side calls “ridiculous” quota limits on steel flowing into the U.S., and American officials still firing insults our way—earlier this week Trump’s economic advisor Larry Kudlow called Trudeau “that punk little kid running Canada.”

Needless to say, this is a big backward step for consumers in both countries. From 1988, which marked Canada’s great leap forward in trade liberalization with the arrival of the initial Canada-U.S. free trade deal, until 2017, the tariffs trend had mostly gone in one direction—down. In 1988 Canada collected duties on U.S. imports equal to 2.6 per cent of the value of all American goods entering the country. After that deal and then NAFTA in 1994, the ratio of duties to imports fell to just 0.2 per cent in 2017.

That was a trajectory that benefited Canadian consumers immensely. Instead, Washington and Ottawa have decided there’s apparently more political gain in kicking themselves in the shins.