How to cool a red-hot housing market

Animal spirits still rule Canada's real estate scene, working urban markets into a froth. But there are ways to tame them. 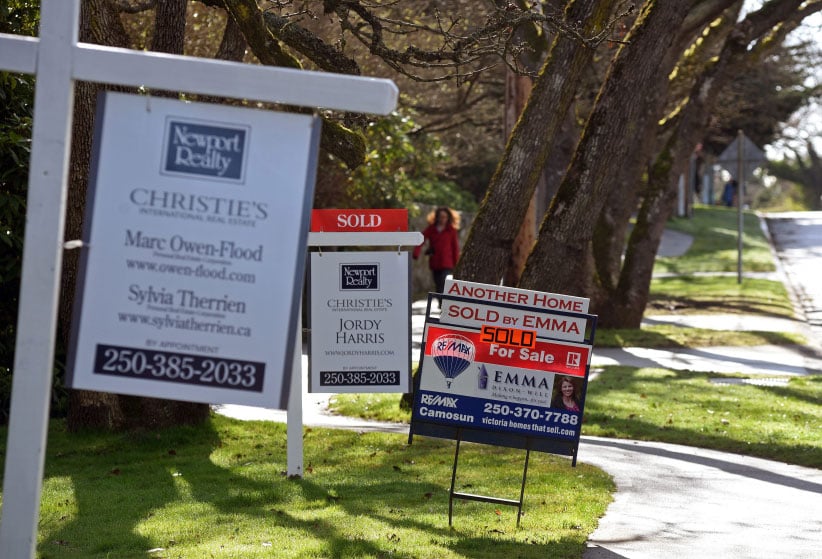 When the federal budget landed last week, Ontario Finance Minister Charles Sousa was disappointed in at least one respect. Sousa had pressed the Liberal government to do something about the province’s overheated real estate market, specifically in the Greater Toronto Area, where the average selling price for homes soared 27.7 per cent compared to the year before, to $875,983. Sousa advocated higher capital gains taxes on the sale of homes that are not primary residences, arguing it would dissuade flippers and speculators, while helping first-time buyers get into the market. But the feds opted not to tinker with capital gains taxes. With the Ontario budget expected soon, Sousa is now promising to take action at the provincial level.

Governments at all levels have tools to address runaway prices and ease conditions for first-time buyers. Here are a few key options:

With interest rates so low, financing to buy real estate has been cheap and easy to obtain. The federal government could make it more difficult for housing mad Canadians by erecting additional hurdles—shortening mortgage amortization periods, raising the five-percent minimum down payment required for buyers who need CMHC insurance, or upping the qualifying rate for a standard five-year fixed mortgage. Slowing credit would cut some potential buyers out of the market, and help prevent Canadians from getting overleveraged. By dampening demand, prices could cool, too.

The federal government has already implemented six rounds of these so-called “macroprudential” changes since 2008. There is room to tighten further, but it’s unlikely at this point. First of all, the impact on the housing market is short-lived (see chart below). Beata Caranci, chief economist at TD Bank Group, says housing markets cool for about six months following a rule change, and then pick up again. “What we’ve seen the last couple of times is those rules are becoming less and less effective,” she says. The last round of changes announced in October, which increased  stress testing rules for borrowers, did virtually nothing to curtail the surge in Toronto home prices. 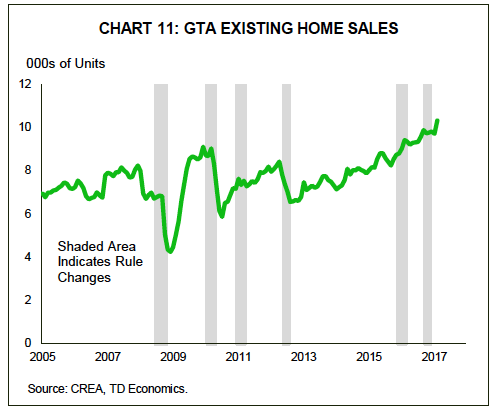 These rule changes are a blunt instrument, and apply to markets across the country—not just Toronto and Vancouver. The mortgage industry is still aggrieved about the changes, partially for that reason. Will Dunning, chief economist for industry group Mortgage Professionals Canada, made a submission to the Standing Committee on Finance recently, arguing the changes will “weaken the broader economy.”

The real estate industry’s favoured option is simply to build more housing. There are a range of measures at the municipal and provincial levels that could help, wrote Scotiabank chief economist Jean-François Perrault in a recent report, such as increasing density allowances in certain neighbourhoods, streamlining development applications and introducing incentives to encourage more construction of rental units. “Supply is the key bottleneck,” Perrault says of the GTA.

The vexing issue for some developers in Ontario is the Greenbelt, 810,000 hectares of protected land in the southern part of the province. Some argue such restrictive land use policies contribute to rising prices by limiting supply. But the Neptis Foundation, a non-profit research group, released a study last year arguing there is still plenty of room to grow. Only 20 per cent of the land designated for development has been used up since 2006. “Simply removing the Greenbelt therefore won’t bring any more supply to the market,” wrote BMO senior economist Robert Kavcic recently.

In Toronto, the supply issue is really about the composition of the housing market, Kavcic argues. Traditional detached homes are indeed a rare thing in the city today. But that doesn’t entirely explain the recent surge in prices. Kavcic points out condos posted double-digit price increases too, meaning something else—either foreign buyers or speculation—is at play.

The Toronto Real Estate Board is already pushing back against the possibility of this measure, arguing foreign buyers are a positive force in the local housing market. TREB says its data show non-resident buyers make up 4.9 per cent of transactions and that most of them purchase a home “as a residence, a home for another family member to live in, or as an investment to rent out.” Condo developer Brad Lamb went so far as to warn targeting non-residents could “precipitate a Canada-wide recession.”

Vancouver’s experience shows the industry’s fear-mongering is just that. Since implementing a 15-percent property-transfer charge for foreign nationals last summer, Vancouver’s housing market has slowed but avoided collapse. Sales dropped 42 per cent year-over-year, and price appreciation significantly eased. The effect may only be temporary, though: the Teranet-National Bank House Price Index shows Vancouver is up 1.7 per cent so far this year.

BMO chief economist Doug Porter says a foreign buyer tax would be a good place for Toronto to start. It’s limited in scope, and allows the government room to take more drastic measures if necessary. “I just don’t see what the harm would be in trying it,” Porter says. New condo buildings, which require a high percentage of units to be sold before construction begins, could be exempted. “There’s a case to be made that the foreign investor element is one of the reasons these new condo developments are getting done,” Porter says.

There could be unintended consequences, though. Money is fluid. Just as Vancouver’s tax pushed foreign investors eastward, a levy in Toronto could push them to other major cities, such as Calgary.

In Toronto, roughly 17 per cent of homes were resold within two years as of March 2016, up from nine per cent a year earlier. That, says Caranci at TD, is a sign that speculators and flippers are at work and potentially driving up prices.

Perrault at Scotiabank favours a speculation tax to reign in this activity. The land transfer tax, for example, could be retooled so that the seller of a property incurs fees. The shorter the duration of ownership, the higher the levy. This measure would apply to a wider range of buyers, not just foreign investors. The goal is not to quash speculation entirely, which Perrault says plays an important role in the market, but to make it more costly and put “a little bit of sand in the wheels.”

An important component is to ensure the tax is revenue neutral. Cash raised from the tax could be allotted to affordable housing, Perrault says, helping to ease supply issues in the region.

Slapping a tariff on properties that sit empty is another way to force more supply onto the market and ease price gains. In January, Vancouver implemented Canada’s first such tax. Owners of secondary homes are required to rent them out for at least half the year or face a one-percent charge based on the value of the property. The city estimated last year that as many as 20,000 properties were empty or under-used.

The situation in Toronto is not as bad as in Vancouver, according to Warren Lovely, head of public-sector research and strategy at National Bank. Still, a modest vacant-home tax could make sense for Toronto. “When a market’s this tight,” Lovely wrote in a recent note, “every incentive to free up properties should be examined closely.”