Of course the premier's specially appointed panel gave him the answer he wanted. It had no choice. 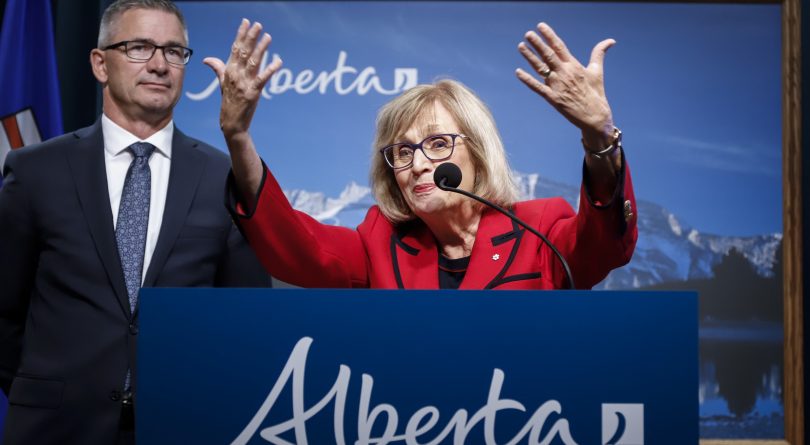 The pre-budget messaging Jason Kenney’s government solicited and received was in blown-up text on the first page after the executive summary of its fiscal review panel’s report: “Raising taxes is not the answer.”

Why isn’t it the answer? In large part because the province’s new United Conservative government mandated the task force to figure out how to balance the provincial books without raising taxes. A group of financial thinkers was told that raising taxes couldn’t be the answer—lo and behold.

For ages, the irritatingly black-and-white question has rung out over Alberta: does the province have a spending problem or a revenue problem? Wise economists groaned out their answer: Argh! It’s both! Alberta has long been the magical province that pretty much spends the most and taxes the least, performing that dual feat thanks to the perennial fairy-dust dump of oil and gas royalty revenues. That gusher dried up around the time Rachel Notley’s NDP government came into power, and nobody expects it to return anytime soon. Which means that if Alberta wants to cease racking up some of Canada’s largest annual deficits and fastest-rising debt, it can stop spending like it did in the boom days, it can stop letting residents have the low taxes it did in the boom days.

To produce Kenney’s convenient guidebook to balancing Alberta’s books by referring to only one side of the ledger and never uttering a word about a provincial sales tax, his government tapped Janice MacKinnon. She’s a Saskatchewan NDP finance minister from the 1990s, who went on to become a go-to researcher for right-leaning think tanks and advisor for conservative governments. The former vegetarian selected to a livestock ranching task force.

The findings: Alberta spends more per person on its public sector, and compensates its teachers, doctors and other workers more generously, than other major provinces. It’s the same story on the half of the budget equation MacKinnon was forbidden from inspecting—Alberta forgoes more revenue than other provinces due to the generosity of its tax regime—but never mind that. More than a decade ago, a more moderate Tory government gave public employees double-digit pay increases to keep pace with the private sector’s booming wages. Now, MacKinnon echoes her past advocacy of wage rollbacks by saying that it was always wrong to compare an Alberta nurse’s pay to an petroleum engineer’s; she told reporters Tuesday they should be compared simply to other provinces (differing economies be damned), reasoning that the nurse will more likely make the geographical leap than switch professions.

MacKinnon prescribes that Kenney legislate the changes to pay, rather go through that bother of negotiating with pesky unions.  They may not adopt such a draconian measure, but Kenney and his cabinet should thank her for the gift of a spiked club to wield in delayed labour talks. Add in recommendations for lifting the post-secondary tuition freeze, various measures to slash health-care costs and government-wide program reviews, and Kenney has ready justification for many of the moves he would have enacted anyway, in a budget that’s eight or so weeks away from release and likely mostly set down before this report’s release.

Notley’s NDP, now in opposition, mashed the panic button and predicted that downsizing Alberta’s spending to the national average will mean a swift 20 per cent spending cut. This alarmist response is also a gift to Kenney, who can now say that whatever he ultimately does is peanuts compared to what the NDP warned about. (The report gives Notley credit for doing some of the work of reining in the massive year-on-year hikes to health spending her Progressive Conservative predecessors delivered. The NDP began to control physician compensation, and now Kenney will be tasked with going much further, complete with more ideologically amenable private-sector service delivery.)

Kenney’s upcoming budget, which he’ll politely not deliver until after fellow Conservative Andrew Scheer runs in the Oct. 21 federal election, will draw immediate comparisons to Doug Ford’s Ontario. A key distinction: the inexperienced Ford rushed to develop and execute an agenda after winning a hastily convened leadership contest and hopping to Queen’s Park—the result was jarring and replete with back–pedalling. Kenney, one of the conservative movement’s most cunning operators, has plotted these reforms for the last three years. There will be howls over his cuts, and a bloody war with organized labour. But he’s betting that after years of wage rollbacks and cuts in the oil patch, there’s public buy-in for some pain to be felt by the oft-protected civil service.

Yet he feels the need to give himself the political cover of an experts’ panel instructing him to do all these big, bad things. MacKinnon’s look-at-just-spending committee was but one. A former Edmonton police chief who’s fretted over the community impact of safe drug consumption sites is leading a review into that very issue, and the Alberta minister in charge ordered the panel not to bother looking into the life-saving benefits of harm reduction, because there’s already research on that. (Whereas there’s surely no research on Alberta’s provincial spending, one must conclude.)

Kenney’s government struck another panel looking into the minimum wage, featuring small-business lobbyists and economic professors who have already bemoaned Alberta’s hike to $15 per hour. But to prevent the ugly spectacle of being instructed to slash low-income Albertans’ pay, the only thing panelists can recommend is whether alcohol and restaurant servers should make less. Kenney government may as well have announced a task force on nutrition, populated it with children and ice cream manufacturers, and limited their mandate to determining what we should eat for dinner.

MacKinnon’s fiscal panel—despite its marching orders and its conservative-friendly composition—couldn’t help but reach longingly for its forbidden fruit: “While the panel’s mandate is not to opine on the make-up of revenues, to successfully manage the province’s finances, steps need to be taken to increase stable sources of revenue and decrease the reliance on the volatile non-renewable resource revenues.” Translation: reap more income taxes and other stable sources to ease reliance on oil and gas revenues. Asked about this at the news conference, MacKinnon said this was necessary future business for Alberta, though she wriggled away from suggesting that meant any rate hikes that go against the ideological religion of Kenney, a former leader of the Canadian Taxpayer Federation.

Eventually, somebody was going to have to figure out how to reconfigure Alberta’s budgeting for the post-bonanza age. Kenney, evidently, is perfectly happy being told how to do half of this messy job.