Lithium could help us ditch fossil fuels. But mining is messy.

The essential element could help us eliminate fossil fuels. But we need to find better ways to mine it. 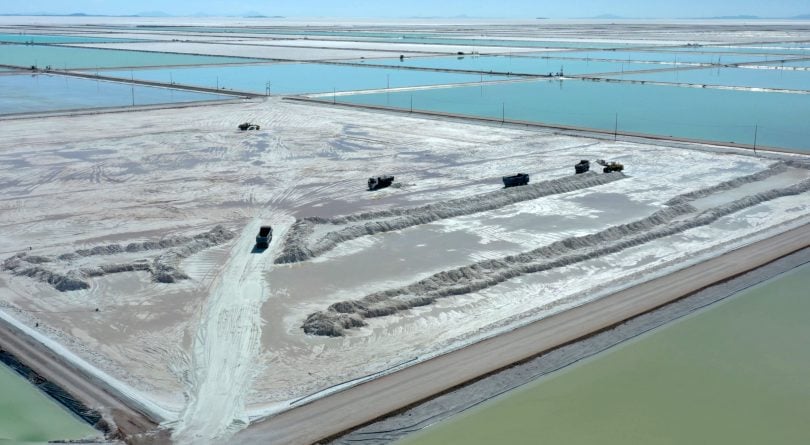 The world’s electrical power and transportation systems need to become fossil-fuel-free to keep climate change to less than two degrees. Mark Jacobson, a professor of civil and environmental engineering at Stanford University, says that transitioning to 100 per cent clean, renewable energy is entirely doable by 2050, with much in place by 2030. “Sixty-one countries have already committed to 100 per cent renewable energy,” Jacobson told participants at an international conference that addressed the question “Can we mine our way out of the climate crisis?” this past November in Ottawa.

But the transition will demand a significant amount of metals and minerals to build the solar panels and wind turbines that will be needed to generate electricity, and make batteries for storing energy and powering vehicles. One of those essential materials is lithium. Lithium-ion batteries are ubiquitous in modern phones and laptops. There are between five and 10 kilograms of pure lithium in electric vehicle batteries.

Replacing the world’s 1.2 billion fossil-fuelled vehicles with ones powered by batteries is going to require a heck of a lot of lithium. In fact, global lithium production needs to increase 8,840 per cent from current levels, says Elsa Dominish, a sustainability researcher at the University of Technology Sydney. While some of this demand is for batteries that store excess energy from solar and wind generation, it is electric vehicles that will need the lion’s share, says Dominish.

READ MORE: Harbour Air: The airline on the path to an all-electric, zero-emission fleet

Over half of the world’s lithium reserves are found in the high-altitude salt flats in the Andes mountains, in what are often called the “lithium triangle” countries: Bolivia, Argentina and Chile. Canadian-based Neo Lithium Corp. is currently building a lithium project in the Argentinian Andes that involves an investment of more than $300 million. China and Australia are the other two major lithium producers.

But the forecasted amount of lithium needed exceeds the world’s currently known reserves by 280 per cent. And even if we discovered sufficient reserves, there are a lot of problems with mining for lithium—as with the reserves that we already know of.

Mining has many damaging impacts. It’s often done in remote and fragile places, polluting fresh water and resulting in conflict with local communities. Without significant changes, these impacts will be dramatically worsened by projected exponential increases for “energy metals,” says conference coordinator Jamie Kneen of MiningWatch Canada. Communities should have the right to say no to mining projects, he argues, and the industry needs to be fully transparent and accountable, including paying the full monetary costs of extraction and cleanup. While it is imperative to cut greenhouse gas emissions, says Kneen, the challenge is how to do it “without destroying more of the planet we are trying to save.”

Bolivia, home to the world’s largest salt flats at Salar de Uyuni, has no commercial lithium production. Before Evo Morales stepped down as president in November 2019, he cancelled a $1.3-billion lithium mining deal with a German company, reportedly responding to protests from a coalition of local community groups that said the project would provide no benefits.

RELATED: How gold mining forever transformed a river in the Yukon

Opposition is also growing in Argentina’s salt flats, where one lithium project has ballooned to 46 in recent years, says Pia Marchegiani, director of community engagement at Argentina’s Environment and Natural Resources Foundation. Local communities have staged hunger strikes and blockades to protest the enormous water use in a very dry region—millions of litres are needed to produce a ton of lithium—as well as a lack of consultation. “Some communities don’t want any lithium mining and just want to be left alone,” says Marchegiani.

Mining companies are using the push for a transition to 100 per cent renewables to generate billions of dollars in new investments, and to pressure governments to cut regulations and speed project approvals, Benjamin Hitchcock of Earthworks, a Washington, D.C.-based environmental organization, told participants at the conference in Ottawa. Mining not only emits over 10 per cent of global carbon emissions, but it’s a significant contributor to the global ecological crisis, he said.

Mining is also a messy business. Each year, the mining industry produces up to 10 billion tons in mine tailings and 100 billion tons of waste rock, says Gavin Mudd, professor of environmental engineering at RMIT University in Melbourne and chair of the Mineral Policy Institute. Ore grades have gone way down, requiring the industry to dig up ever larger volumes of rock. “There are places we should not mine at all,” Mudd says, adding: “Lots of mining projects provide no net benefit to society.”

Canada is home to over 60 per cent of the world’s mining industry and most Canadian mining companies operate outside the country, says Emily Dwyer of the Canadian Network on Corporate Accountability. These companies are “the face of Canada” in the regions where they operate, and despite there being a record of serious human rights abuses and negative environmental impacts in the mining industry, there is little federal oversight, Dwyer says.

Canada needs to provide that oversight, says John Drexhage, an independent consultant to the World Bank. But even with that, and new lithium reserves, it won’t be enough to ensure fossil-fuel-free transportation. Wealthy countries will also need to reduce energy and material consumption, he says, and dramatically increase the reuse and recycling of existing materials, and the use of public transit.

Using lithium for public transport rather than individual cars in rich northern countries, for example, might go some way toward bringing local Argentinian communities around to the idea of lithium mining in their salt flats, says Marchegiani. Moving to a less materialistic world in general would reduce the need for mining, she says, and with it the impacts on the global south where most mining is done.

This article appears in print in the January 2020 issue of Maclean’s magazine with the headline, “The lithium paradox.” Order a copy of the Year Ahead special issue here. Subscribe to the monthly print magazine here.