The price of Canadian lobster is soaring, thanks to the U.S.-China trade war. So, alas, are dockside heists. 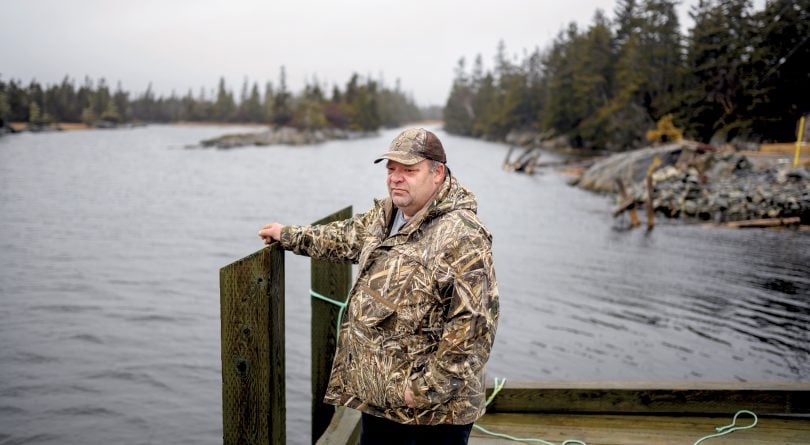 Fisherman Ken Wyatt poses in Long Cove near Port Medway, N.S. on Wednesday, January 30, 2019 where thieves cut the ropes to his and others' live lobster being stowed in crates tied to a mooring under water. The thieves have made away with over $15K in lobster caught by other fishermen in Long Cove alone. Photograph by Darren Calabrese

As lobster ﬁsherman Ken Wyatt rang in the new year with 40 friends in his sprawling shed, four kilometres away at the end of a winding, unlit dirt road, thieves in the tiny Nova Scotian ﬁshing community of Port Medway positioned themselves for a heist. Unbeknownst to Wyatt, as he and his crew clinked beer bottles—and many others around the world feasted on lobster from these waters—thieves were pushing a small boat down a seaweed-covered slipway. The booty that night: 800 lb. of premium lobsters being stored out in the black, icy waters of the Atlantic. “They knew we were partying,” says Wyatt, 53. “They had balls to go down there. They scouted it out.”

The Atlantic lobster ﬁshery is the most lucrative in Canada, producing $1.4 billion in commercial landings in 2017, and brazen nighttime thefts like the one in Port Medway are on the rise. For the past few years, small ﬁshing communities along the southern coast of Nova Scotia, from Lunenburg to Yarmouth, have been hit repeatedly. Over five weeks in December and January, thieves struck four times—and that’s just what was reported to police. The area is home to the two highest-producing lobster zones in the country; it’s common to see stacks of candy-coloured cages on front lawns and, for decoration, the weathered wooden traps of yesteryear. The heists have stunned residents of tight-knit ﬁshing hamlets, where people gather for community suppers and strangers wave to each other on the road. But because most of the thefts go unsolved, many fishermen say, they don’t bother telling the RCMP.

Still, as the price tag of the delicacy rises—currently around $9.75 per pound at the wharf; $24 at seafood counters in central Canada—so does its black-market value. Growing demand from Asia due to the trade war between the U.S. and China has turned the bottom-feeding crustaceans into valuable contraband.

For decades, the people who catch lobster in Port Medway and those in towns all over the Maritimes have operated under an honour system: they stow their catches in crates at the bottom of the ocean, tied to moorings. It’s like an all-natural holding tank as they wait for the best market price.

On New Year’s Eve in Port Medway, the frailties of that system came into sharp relief. As the wind blew and the rain pelted down, the thieves cut the ropes in the middle of Long Cove, hauling the spoils ashore and making off with about $8,000 worth of live lobster, at least a week’s worth of gruelling work for three fishermen. The week before, thieves nabbed $6,000 worth of crustaceans, from the same cove, that belonged to another local lobster ﬁsherman. 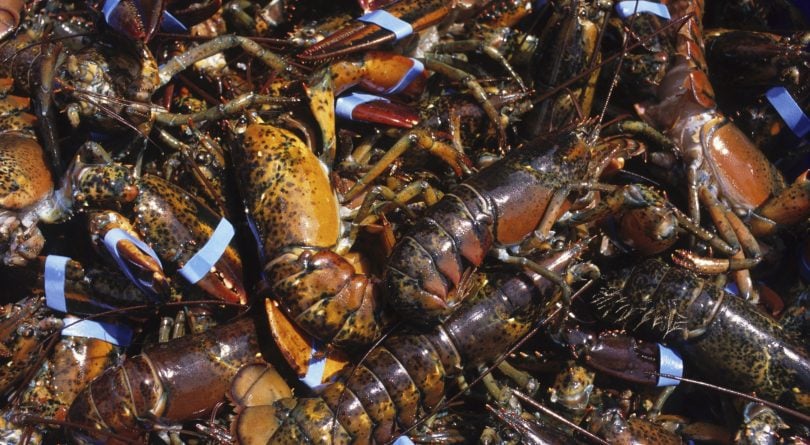 Wyatt’s two crew members, who work on a percentage, lost several thousand dollars. He found out himself the following morning when his deckhand went to check on the lobsters.

“I was floored, flabbergasted and really hung over,” says Wyatt at the kitchen table of his modest two-storey home, pulling on a cigarette. “It’s someone we probably know. Someone we’re not friends with. Someone who could handle a small boat in hard weather, who’s been on the water before and has a connection to sell all that lobster.”

The rewards, evidently, are worth the risk. Over the past four winters, there have been at least seven signiﬁcant lobster heists reported to police up and down Nova Scotia’s southern coast, adding up to roughly 9,000 lb. of stolen catch.

Nova Scotia RCMP have laid no charges in any of the cases. “How do you identify thousands of pounds of lobster?” asks spokesperson Cpl. Jennifer Clarke. “It’s live, it’s perishable—it’s very, very difﬁcult to do anything with that unless we get information from the community. That’s what we rely on a lot of times in cases like this.”

Clarke suggests lobster ﬁshermen deploy trail cameras used to track movement of wildlife to keep watch for intruders. “They can be used as a fairly inexpensive security camera,” she says. And police are currently trying to identify suspects from surveillance video captured by the Lunenburg Harbour Authority after the most recent nighttime theft of $1,000 worth of lobster, which was taken Jan. 26 from a holding tank located in the water near a wharf.

Lobster theft is also not uncommon in New Brunswick, but it’s usually from processing plants, not individuals. Last August, thieves struck one on the Acadian Peninsula, fleeing in a stolen plumbing truck with what was described as “a large quantity” of frozen lobster meat. On Canada Day in 2017, crooks stole an astounding $1 million worth of frozen lobster meat from the northern New Brunswick village of Grande-Anse. For this crime, police have charged four suspects and said they believe the theft is connected to an organized-crime ring.

Meanwhile, the residents of Port Medway now peer a little more closely at strangers and take long looks at unfamiliar cars in the area.

Wyatt has been driving down to the end of Long Cove Road in the middle of the night to check on his catches.

“With the money I lost, I could’ve bought a nice security system,” he laments at his table, set with red-and-blue lobster–themed placemats. “They’re not going to deter me from holding my lobsters down there. I’ll adapt and do what should be done for these times.”