The massive medallion, made of the purest gold bullion ever reﬁned and worth $5.8 million, was stolen from the Bode Museum in Berlin—and has never been found 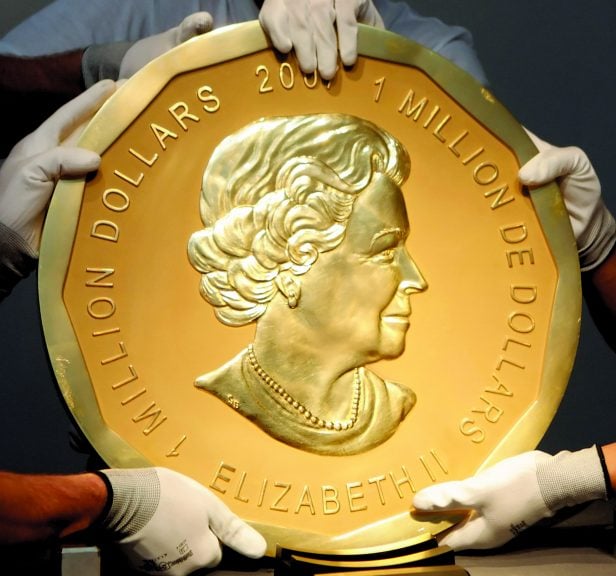 One of the six $1-million “Big Maple Leaf” coins, the biggest and purest gold coin ever made (Heinz-Peter Bader/Reuters)

Susanna Blunt’s artwork has been in more Canadian homes than any other artist in world history. You probably have a piece or two, although they’re more likely to be in your pocket or purse than over your mantel. Flip over your loonie or toonie and you’ll find a Susanna Blunt.

In 2003, Blunt, a B.C. sculptor-painter-collagist-maker-of-things, had her effigy of Queen Elizabeth II chosen from works by a national pool of artists to be featured on the obverse side of all circulation coins and many collector ones produced by the Royal Canadian Mint—about 16 billion and counting.

While most coins bearing Blunt’s work are pocket change and are treated accordingly, one piece has received international notoriety. In March 2017, a massive medallion made of the purest gold bullion ever reﬁned was stolen from the Bode Museum in Berlin, home to one of the most extensive numismatic collections in the world. Without triggering a single alarm, the $5.8-million coin was gone. “That’s more than anything I’ve ever sold,” the artist told Maclean’s, laughing.

READ MORE: Canada is plagued by Bitcoin ransoms—and there’s no help in sight

The coin had been produced in Ottawa in 2007, the latest entrant in the ongoing international coin-measuring contest between national mints. A few years prior, the Münze Österreich, the Austrian mint, had created its most audacious product line yet: 15 massive coins made of 99.99% pure gold, each weighing 30 kg and valued at 100,000 euros.

Naturally, the Canadian mint, which competes with other national mints and gold refineries to sell its precious metals and to produce the best bullion, felt the urge to one-up the Austrians for bragging rights and reputation. The result was a 100-kg discus measuring nearly 60 cm across its face and featuring the regal profile of Blunt’s Liz.

Not only was the Ottawa-made coin bigger than any other ever made, the gold from which it was crafted was “more gold than any other gold in the world,” says Xianyao Li, the chief technology officer at the mint. At “five nines pure” (99.999%) the gold contained less than 10 parts per million of other elements like silver, aluminum and zirconium, one decimal place purer and hundreds of thousands of dollars more valuable than any gold coinage minted in Vienna or elsewhere, ever.

RELATED: Why a coin for female suffrage just glosses over uncomfortable truth

To create any coin requires strict adherence to engineering principles as well as state-of-the-art technology and attention to detail, says Stan Witten, the mint’s senior engraver, who slaved over the minute detailing on both sides of the coin. It required special care; he couldn’t exactly crumple up a coin that weighs as much as a refrigerator, toss it in the wastepaper basket and start anew.

In 2007, when the mint unveiled the coin, heralded as “Big Maple Leaf” due to the leaf on its reverse, buyers came forward, looking for something shiny to jam into their piggy banks. Five more were custom-made, with one in the mint’s vaults; one purchased by the Barrick Gold Corporation and loaned to the Royal Ontario Museum, where it remains on display; and four dispersed around the globe. One version ended up in the Bode, a towering complement to its original claim to fame: a collection of more than half a million pieces of fine, aged cheddar.

Then came the robbery. In the dead of night, two brothers and their cousin allegedly climbed through a malfunctioning window into the Bode, capitalizing on a tip, police said, from a fourth suspect who worked as a museum guard. The suspects then swiftly removed the coin from its glass encasement, lifted it through the window using a rope before wheelbarrowing “Big Maple” to their getaway car, said Lisa Jani, a criminal judge in Germany and a spokesperson for all criminal courts in Berlin.

VIDEO: What it feels like to mint coins at Winnipeg’s Royal Canadian Mint

A city-wide search began for the men and the coin, and German police eventually apprehended the suspects. They were on trial in January in regional court, with a verdict expected by the end of March. But the coin has yet to be found, and the prosecution believes it has been melted down or hidden; chances are it isn’t lodged between someone’s sofa cushions.

Blunt, who has studied and exhibited at the Royal Academy of Arts in London, painted Prince Edward’s official portrait and taken tea at Buckingham Palace, received a respectable fee for her original design. But the mint has the right to reuse it in any future projects: “They don’t pay me royalties, but it’s all right; I’ve never really been in this for the money.” She has had her work stolen before—a portrait here, a painting there—but nobody ever talked about those: they weren’t worth millions of dollars like “Big Maple.”

Now, as the trial rolls on, she’s being mentioned frequently in the European press and is fielding interview requests from coin publications. It’s a newfound fame Blunt would gladly forgo to see the coin recovered and returned to its rightful place among the cheese in Berlin’s venerable Bode. “In the art world, this will not be a big deal,” she says, “but in the coin world, it will never be forgotten.”