What Trump's troubles mean for the stock market

The past week of political upheaval in Washington has brought volatility to stock markets, raising questions of how markets would respond if the crisis deepens 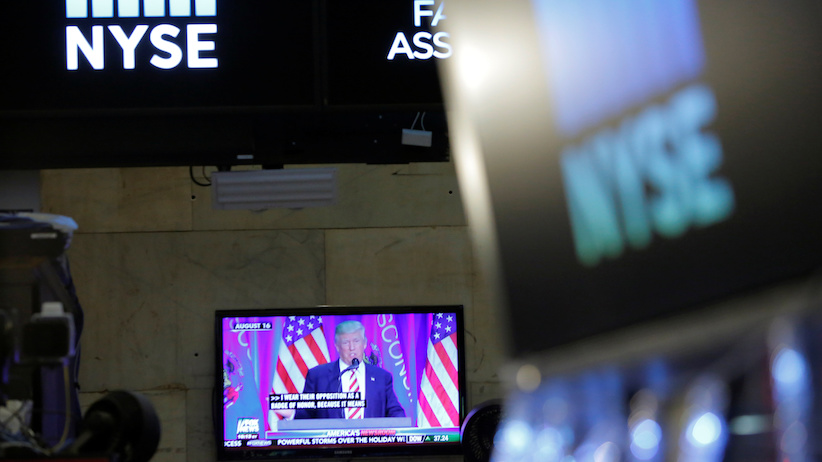 Donald Trump likes to say he moves markets. The past week provided concrete proof of that claim: The Donald acted, and markets fell.

Since the election, markets have largely tuned out the negative headlines about Trump and his administration. Markets generally viewed the goings on in the White House as a distraction from Trump’s promise to implement his so-called pro-growth agenda, such as tax reform.

But the news that Trump allegedly made a personal appeal to  then-FBI director James Comey to drop the bureau’s investigation into former national security adviser Michael Flynn, altered the landscape. That revelation shifted the market’s view that Trump’s agenda might not just be delayed, but completely derailed.

Given the market saw its biggest one-day decline in months before recovering somewhat, the question becomes how might markets respond if this political crisis deepens and Trump either resigns or gets impeached?

History unfortunately doesn’t offer much of a guide. Consider the time between when U.S. President Richard Nixon’s tapes were subpoenaed and his ultimate resignation. During that time the S&P 500 stock market index fell 10 per cent. While some of that decline no doubt reflected uncertainty around the Watergate investigation,  global markets were already falling following the collapse of the Breton Woods agreement in 1977 and the end of fixed exchange rates.

U.S. President Clinton legal woes don’t help much either. In 1998, between the time when Clinton’s Secret Service agents received subpoenas and the House Judiciary Committee said it would consider a resolution to begin an impeachment inquiry, markets also fell 10 per cent. Yet little to any of that drop can be attributed to the U.S. president, as it was also the period that saw the Asian financial crisis.

Which is to say, while politics may have a short-term effect, markets typically are driven by other factors. “Generally the market holds presidents in contempt,” says Joe Martin, director of Canadian business history, at the Rotman School of Management. Despite all of the attention afforded to Trump, very little ever gets done at the political level in the U.S., which makes it easy for business to tune it out.

“It’s a big mistake to invest around politics,” says David Rosenberg, Gluskin Sheff + Associates chief economist and strategist. “Despite my advice not to invest around Trumponomics, people did it in any event and that is what is being unwound now.” Consider where the biggest losses occurred this week. The hardest hit stocks were concentrated in U.S. financials, employment services and tech companies—the Trump sectors. While the S&P 500 ended down 1.8 on the day, these sectors fell between 4 per cent and 6 per cent.

Pay particular attention to companies paying the highest tax rates, have the highest retained earnings locked up abroad or companies that are tied to infrastructure spending. “Those are the Trump sectors, in so much as this presidency gets obliterated these are the sectors that could correct further,” says Rosenberg.

There’s a chance that recent drop, focused in a few key areas, might account for a large extent of the Trump effect. As much as Trump likes to claim the rally has been in response to his presidency, the rally has been driven by a few large cap growth stocks.

Regardless of what happens with Trump, investors have other reasons to be concerned about the U.S. market. The U.S. bull market and economic expansion are both in their ninth year and it’s starting to deteriorate. As Rosenberg points out, momentum has stalled, with the average stocks now off about 6 per cent from their 52-week highs, while earnings forecasts are being pared back. In a recent note Rosenberg pointed out that 2017 earnings have already been trimmed by 1.5 per cent, and may fall further if Trump can’t push through his pro-growth agenda.

Over the next 12 months Rosenberg sees the market favouring value over growth, defensive over cyclical stocks and active over passive investment styles. “Playing defense, and a focus on quality and liquidity is right now paramount,” he says, noting that aside from raising cash by reducing exposure to the U.S., Gluskin Sheff is focusing on quality companies that have established record of earnings that are visible and predicable.

Another thing to consider is that Trump may yet come through this unscathed. There’s no certainty that impeachment proceedings will happen. Ian Bremmer, who heads up the Eurasia Group, a political risk consultancy, points out that while you can’t say the chance of impeachment is 0 per cent, he’s not convinced that Trump has done enough to give that serious thought. “At this point I don’t see anything that smells to me that it is an impeachable offence,” he says.

As for investing around Trump, Rosenberg’s advice is to run against the crowd, taking profits as the market moves higher on a political rally, and buying if a politically-motivated correction returns value to the market. “If we are going to get gyrations based on politics, those are going to provide selling or buying opportunity along the way,” he says.