Uber is rumoured to be eyeing online grocery delivery in Canada. Will chains be able to step up their e-commerce game? 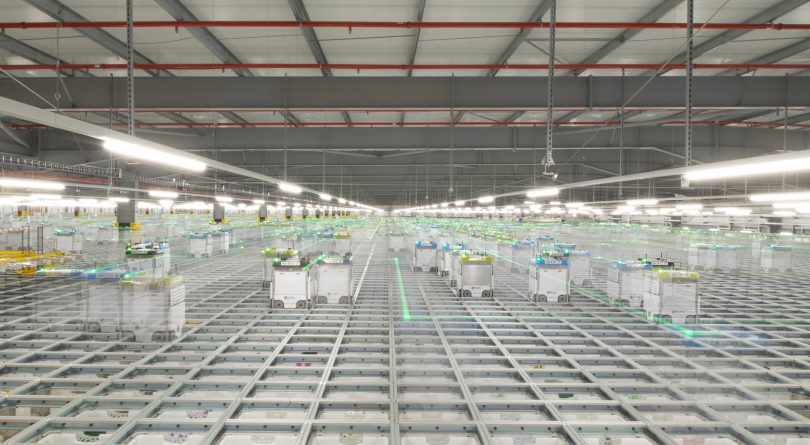 The robots in Sobeys' Vaughan facility will be fast, efficient and key to a boom in grocery e-commerce (Courtesy of Ocado)

Deep in a warehouse just north of Toronto, more than one thousand robots will come to life, whizzing across a space the size of 15 hockey rinks. As they dash about the Vaughan building, they’ll deliver bins of products to workers who will scoop out the right number of yogurts or pick just-ripe bananas, and package them.

Working together, a 50-item grocery order will take no more than 15 minutes—and little sweat—to assemble. Within a day those groceries, ordered online or by app, will land at a customer’s door.

This scene will unfold over and over again as Nova Scotia-based supermarket chain Sobeys partners with U.K. ﬁrm Ocado Group to launch a $95-million e-commerce program called Voilà in 2020—the year they and other experts are banking on being a grocery game-changer.

Online grocery purchases represent about $2 billion of the $120-billion food retail market, according to e-commerce researchers at retail consultancy J.C. Williams Group. The Canadians who already indulge use delivery and online ordering options from Sobeys’ competitors, including Loblaws, Metro, Walmart and Amazon.

READ MORE: Inside the fight for the future of grocery delivery in Canada

“I would expect the solutions in 2020 will be even more convenient and streamlined for consumers,” says Robert Carter, a food industry advisor at strategy ﬁrm Straton Hunter, who predicts the increase in options available in the year ahead will hasten grocery e-commerce’s growth, popularity and competition.

Meanwhile, Loblaws, which has 700 locations for customers to retrieve online orders through the PC Express app, will launch a trial system dubbed “automated-picking technology” at their Dufferin and Steeles superstore in the Greater Toronto Area. The company hopes that automated picking—the process whereby bins filled with certain grocery items move along conveyor belts and into the hands of workers—will increase the speed and accuracy of packing groceries purchased on the app. It’s the natural evolution of grocery e-commerce—why have a human walk around a Loblaws store to pick up every item on a customer’s list when machinery can do it instead?

The rush towards such offerings has been triggered by shoppers who want food faster and cheaper than ever before. Diners these days can pre-order dishes before getting to a restaurant, request food delivery in minutes through apps, or rely on a meal kit service to keep them fed for weeks or months.

Fewer people are filling their fridges at supermarkets and grocers can’t ignore that trend, Carter says. They are trying to lure shoppers through doors with artisanal offerings, in-store demonstrations and celebrity chef visits, but some people just want to shop from their couch, office or car.

RELATED: Did Italian food even exist before Eataly?

Enticing shoppers to favour grocery e-commerce options has been slow. Canadians haven’t adopted online shopping as quickly as Americans, and the ones that have complain about cost and quality.

Sarah Joyce, Sobeys’ senior vice-president of e-commerce, is convinced 2020 will change that.

“Food e-commerce is still immature in Canada, but we think it’s because Canadians haven’t yet experienced something that is truly compelling enough to make them give it a try,” she says, suggesting the answer is Ocado, a system already used by European chains Morrisons, Bon Preu and Groupe Casino. “With the right solution, this market is primed for growth.”

That growth may come in 2020 from Uber, which has quietly been toiling on a grocery initiative—and Canada is believed to be its ground zero. The San Francisco-based tech behemoth, which used Toronto to launch its popular Uber Eats service, sought a Toronto-based head of grocery in November 2018.

Uber declined to say whether the role was filled or share more details, but CEO Dara Khosrowshahi has hinted Uber’s October purchase of a majority stake in Cornershop, a Chile-based online grocer with a Toronto presence, could factor into plans.

“Our Eats team is always looking to expand into new areas where our technology can help people get food more easily and efﬁciently,” adds an Uber spokesperson. “We want to give them new options, including access to an in-store experience or a way to get groceries.”

That should have grocers worried, Carter says. “Now you’ve got an additional convenience channel coming in that’s going to erode even more market share, when these grocery guys are still in the dark about a lot of evolving changes to consumer behaviour,” he explains.

Carter shakes his head at supermarkets that were slow to offer e-commerce options and thinks it’s “navel gazing” for Sobeys to take so long to debut Voilà, but he’s interested to see how the market shakes up in 2020.

“The consumer is moving ahead and if you’re not going to go where the consumers are, then you’re going to get left behind,” he says.

This article appears in print in the January 2020 issue of Maclean’s magazine with the headline, “Grocery game-changers.” Order a copy of the Year Ahead special issue here. Subscribe to the monthly print magazine here.