A day of insanity that typifies Toronto's housing market

When the real estate expo came to Toronto, attendees were fed a steady dose of hype and hoopla about how to get rich trading houses 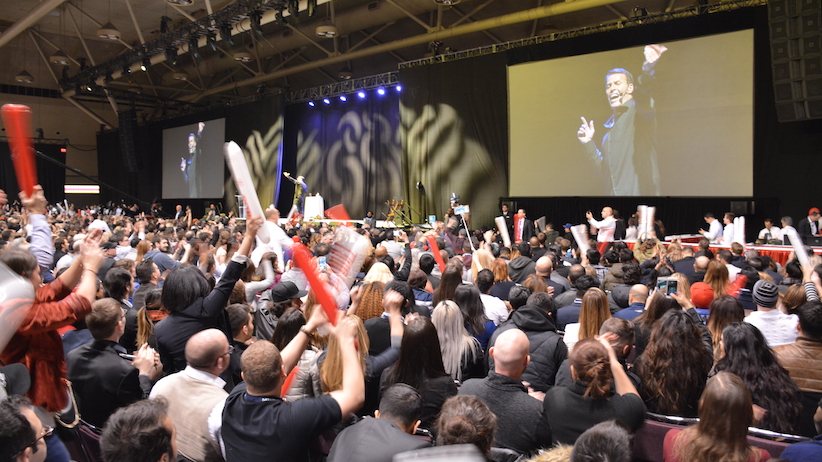 If real estate were a religion, Elijah Joseph would be a believer. He is 24-years-old, and he has devoted his future to erecting properties trimmed with 24-carat gold. “I’m looking to build a great big empire,” he says. “There is no doubt. I have a plan. I have a course of action, and right now, I’m kind of looking for a mentor.”

In mid-March, Joseph attended the Toronto Real Estate Wealth Expo, a jungle of real estate gurus and their 15,000 disciples who paid up to $500 per ticket, only to be told to invest in what is actually one of the worst buyer’s markets in Canada. While life coach Tony Robbins and singer Pitbull fired up the crowd into impulsive mode, a line-up of personalities preached that, despite record-high Toronto house prices, now is actually an ideal time to buy. The presenters all had personal stakes in the market, but attendees ignored the conflict of interest, and the event, disguised as a conference and concert, became a full-day sermon on buying real estate as the greatest good.

“Fear will kill you. Fear will drown you,” said Daryl King, who is selling properties upwards of $8.8 million throughout the Greater Toronto Area and Ontario. “Just jump in!” chanted Inez Kurdryk, a downtown realtor. On the same panel, Brad Lamb, nicknamed “the condo king,” who has built eight high-rises in Toronto, declared, “Toronto has become one of the last safe havens in the world.”

In reality, a consensus is emerging that Toronto is a in fact a buyer’s hell. The average house price in the Greater Toronto Area sold for $916,000 last month, up more than 30 per cent from the year before.

The Expo strategically tours cities in need of buyers. Sponsored by real estate agencies, developers and banks, the event will visit Miami, a seller’s market in which housing prices rose 10 per cent last year, and Chicago, which was almost an equally strong seller’s market last year when the Expo was planned.

“This event is a blood-sucking event,” said Clark Lord, a musician and artist who bought tickets solely to see Tony Robbins. “They’re telling everyone [that they can] be a millionaire when we can’t even pay for food.” Lord’s friend, Ivan Rendalic, a lawyer, only went because Lord bought him a ticket. “All this is is a stimulus package,” says Rendalic. “They’re getting high on the hype. They’re refusing the logic. Once people hit a small barrier, they’re f–ked.”

The event itself was misleading. “Gold ticket seating” meant a foldable chair at the nosebleed-back, and while attendees like Joseph paid $250 for “VIP” passes, expecting they would get to meet Robbins, such access was reserved for people who paid $500 for “Ultimate VIP” passes. Robbins showed up an hour and a half late, at which point he fist-pumped around the room while telling people to search within their hearts—a bizarre hybrid of busker and Buddha. “Our hearts start beating before our brains start working,” he said, though his embryology lesson was incorrect. Robbins wasn’t the only presenter who needed fact-checking; at the Expo in 2009, a headliner was Donald Trump.

The most aggressive salesman was realtor Tim Payne, a presenter who was expected to spill secrets on flipping houses but spent nearly two hours advertising his $995 three-day course, charging an extra $6,000 for access to contacts. “I wanna kick your legs out and choke you until you’re wealthy,” he said. As the father of six boys, he boasted to the crowd, “I feed them money. They just crap out money.”

That burden of proof was enough to convince Joseph, who stood up and headed for a registration table to pay for the course. “I just know I want to be around mansions,” he said. “I look at them. I’m in love with them. I study them.” His future house: “Marble floor. 30-foot ceilings. Maybe a tennis court, maybe not a tennis court (I’m not really a tennis guy.) And a big, big, big hangar for a variety of cars.”

Joseph currently lives with roommates in an apartment in East York for $800 per month. He works going door-to-door selling solar panels on commission. He was formerly a college basketball player and lived in Windsor with his mother, a personal support worker, but he says, “I left my family to find wealth.”

Exiting the Expo, Joseph planned to convert others to join the real estate market. He is nicknamed “The Rev,” he says, because he talks to his friends with reverend-like pedagogy. “When I ingest this, I literally spew it all out to everyone I speak with,” he says. “Maybe I’ll get into motivational speaking of my own.”