The Move: Kelowna, B.C. to Nova Scotia for a breath of fresh air

“My doctor told me that, at that time, breathing the Okanagan air was the equivalent of smoking two packs of cigarettes a day” 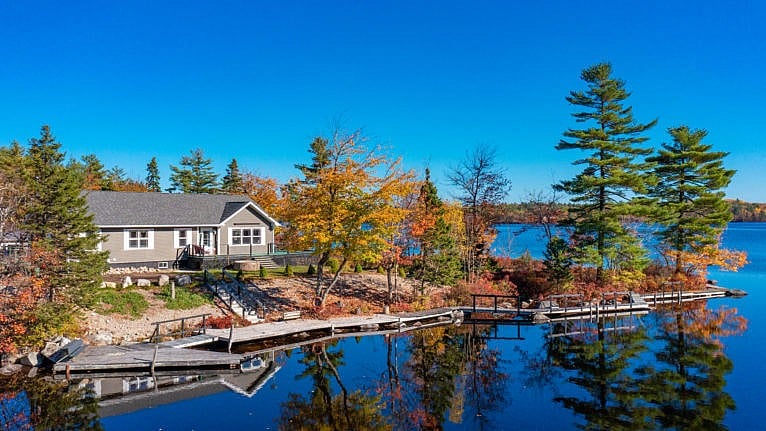 In 2014, Dana moved with her three children—Jared, Ronel and Alexa—from Kelowna, B.C., to a rural property just a 15-minute drive outside of town. She hoped that the teens would benefit from more time spent outdoors. For Dana, an avid gardener, it was an opportunity to plant a bevy of fruits, veggies and robust nut trees. But her new one-acre lot, wasn’t private enough.

By 2021, Dana was once again itching to move. Her spice-and-cookware business went online just after the onset of the pandemic, and Jared and Ronel had moved out a few years prior. Alexa had just graduated from high school. Most importantly, the smoke from B.C.’s forest fires was affecting Dana’s health. “My doctor told me that, at that time, breathing the Okanagan air was equivalent to smoking two or three packs of cigarettes a day,” she says. In July of 2021, a fire started just down the road from Dana’s property. The only reason it was quickly snuffed out was because her neighbour happened to be driving by the site in a water truck en route to refill another neighbour’s well, which had dried out due to the area’s hotter-than-hot temperatures. “I thought to myself: this is ridiculous. I need to get out of here,’” she says. 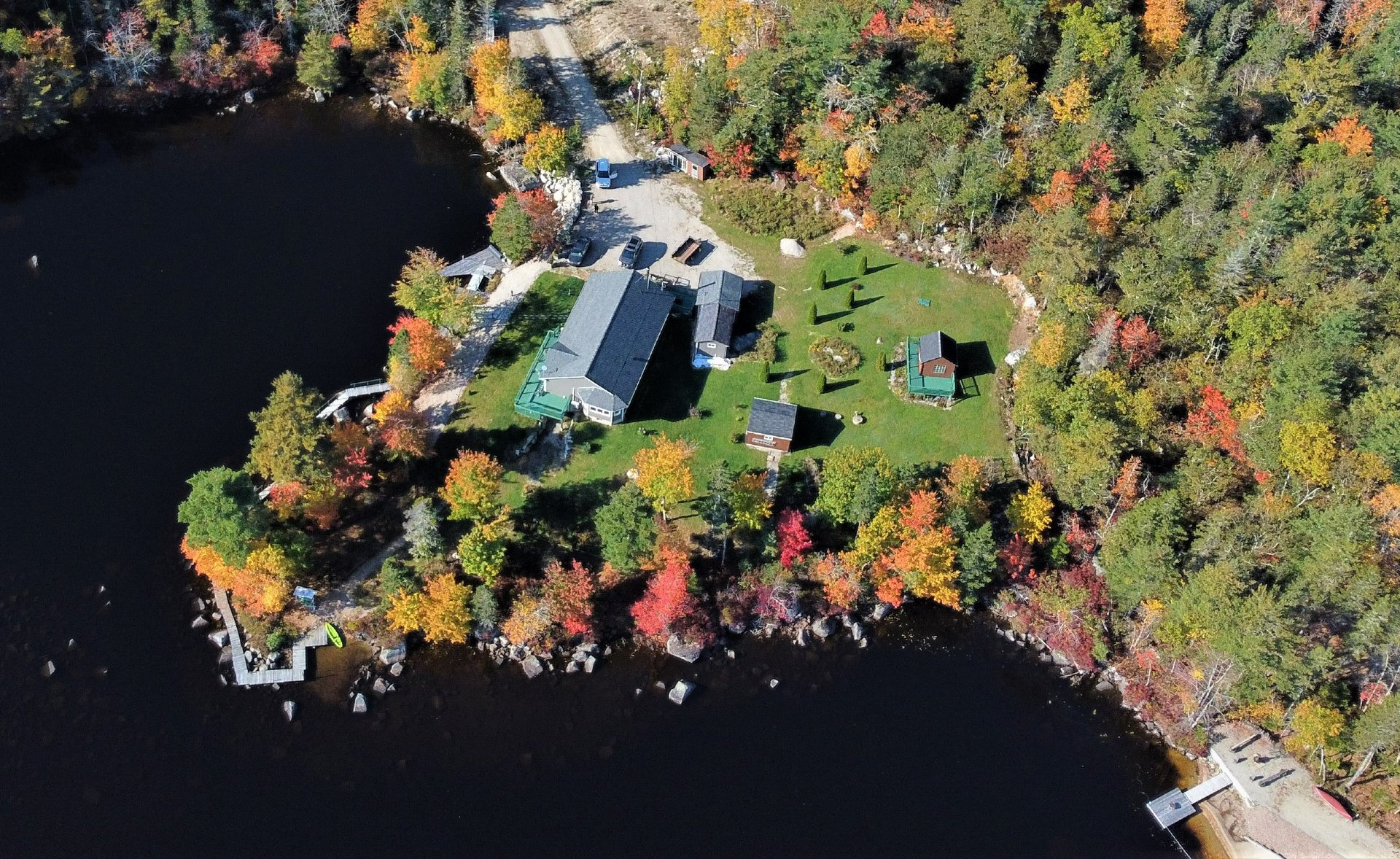 Dana briefly considered moving to Newfoundland, where her mother lived. She wanted to be able to provide any care that her aging mom might need. But Dana, ever the green thumb, balked at the province’s unfavourable gardening conditions. (“It can be tough to grow anything other than potatoes, cabbages and beets in Newfoundland because of the cooler temperatures,” she says.) Dana’s sister, Liette, suggested Nova Scotia, where fruit trees were newly flourishing thanks to the warmer, wetter weather. Dana was a bit shocked by the extent to which climate shifts were influencing her relocation. “Climate is the biggest factor you can’t control,” she says.

In the summer of 2021, Dana started combing the available listings in Nova Scotia and set a budget of $550,000. She wanted a waterfront property, with at least two bedrooms and three or four acres of land for farming purposes. “I see myself as a bit of a homesteader,” she says. “I hope to be able to provide for myself, especially with rising food costs.” Dana was also looking for a property that was within a 15-minute drive of basic community amenities, like a gas station, and no more than an hour’s drive to a larger city centre. She was delighted to see how much further her budget would stretch in Nova Scotia compared to markets out west. “I was like, ‘Holy shit. Decision made,’” Dana says. 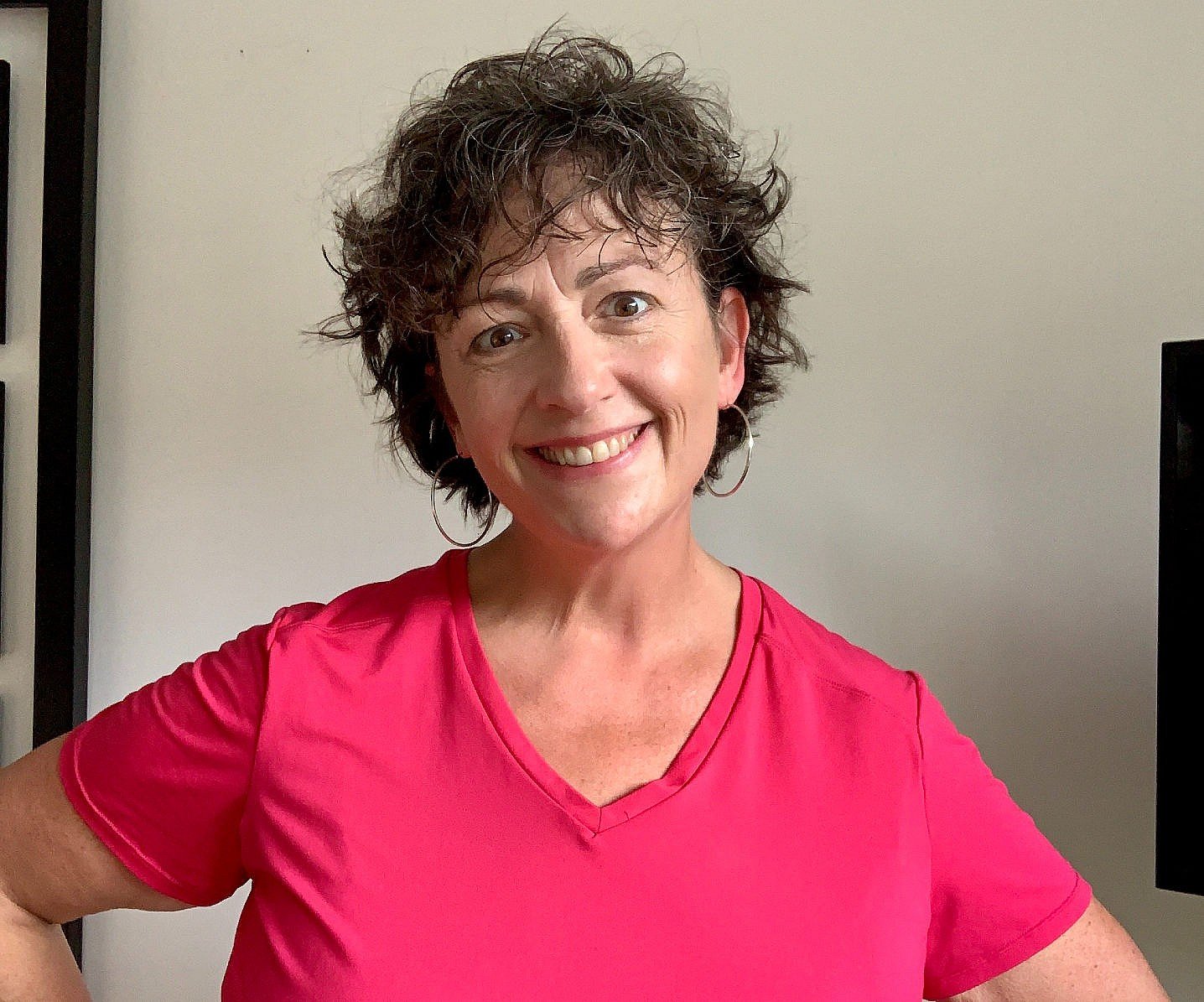 She listed her semi-rural B.C. lot in early August. It sold within a day for $990,000. With a closing date set for September, Dana figured she’d have plenty of time to find a new place, not realizing that Nova Scotia’s South Shore region—where she’d been scoping out properties—had recently become one of the fastest-growing real estate markets in the country. “I’d see a house go up online, contact the realtor and they’d be like, ‘There are four offers already,’” Dana says. She decided to increase her budget to $650,000.

Two weeks later, Dana stumbled on a listing for a three-bedroom, two-bathroom home priced at $575,000. It sat on a whopping 18 acres of coveted South Shore land, including 600 feet of lake frontage on a scenic cove. “After I saw the first 12 photos, all of which were drone shots of the exterior, I thought: I’m sold. I don’t even care what it looks like inside,” Dana says. The sellers were in their 80s, so the interior decor was a bit dated, but the overall structure appeared to be in good condition. The home’s main entrance opened to a large living-and-dining room with stunning views of the lake, and the kitchen had a large island, where Dana imagined she’d film some of her online cooking classes. The basement was unfinished, but Dana never shied away from getting her hands dirty. Lastly, the property was a 45-minute drive from Halifax and a day-long trip to her mother—but that was still preferable to an expensive, last-minute flight from British Columbia. Dana submitted an offer of $650,000 the next day, which the sellers accepted contingent on an October closing date. 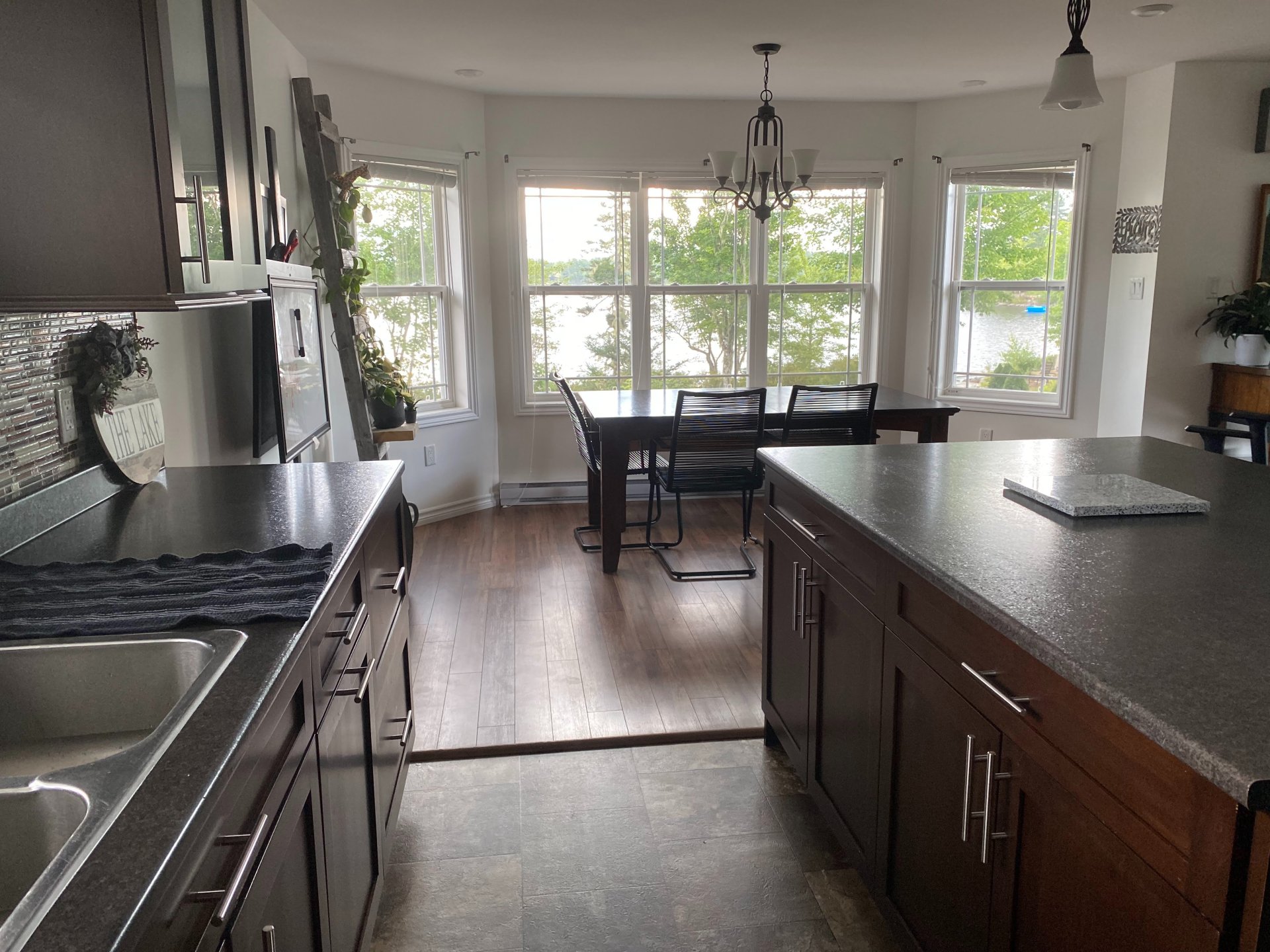 At the time, the rental price for a coast-to-coast U-Haul trip hovered around $10,000. Instead, Dana bought a small, used trailer, sold most of her possessions—handing down some to the kids—and packed only the essentials. She drove across Canada for eight days, stopping each night—and once in Ontario to pick up two friends who volunteered to help her settle in. The first thing the group did when they arrived at Dana’s new home was take a lakeside stroll. “We stood on the dock and cheered with some champagne,” Dana says. “All the leaves had started to turn red and orange. All the glory of nature was around me.”

Still, Mother Nature’s many moods seemed to have followed Dana eastward, and the months after move-in were a mixed bag. Dana’s well water was too high in iron, so she spent $3,000 on a new filtration system. The property also began flooding with every big downpour, and the next spring, a sinkhole opened up on the driveway. Dana spent another $20,000 to outfit her acreage with drainage ditches, which, so far, has helped.

Aside from these mini natural disasters, Dana is enjoying her new natural life in Nova Scotia. She’s planted a vegetable garden as well as seeds for a future “fruit forest”: berry bushes and peach, pear, cherry and hazelnut trees. She hikes and kayaks and ends her days watching the moonrise. In general, she breathes much easier. “The air is ridiculously clean,” Dana says. “Whenever I set foot outside, I can feel my blood pressure lower, like, This is exactly right.” 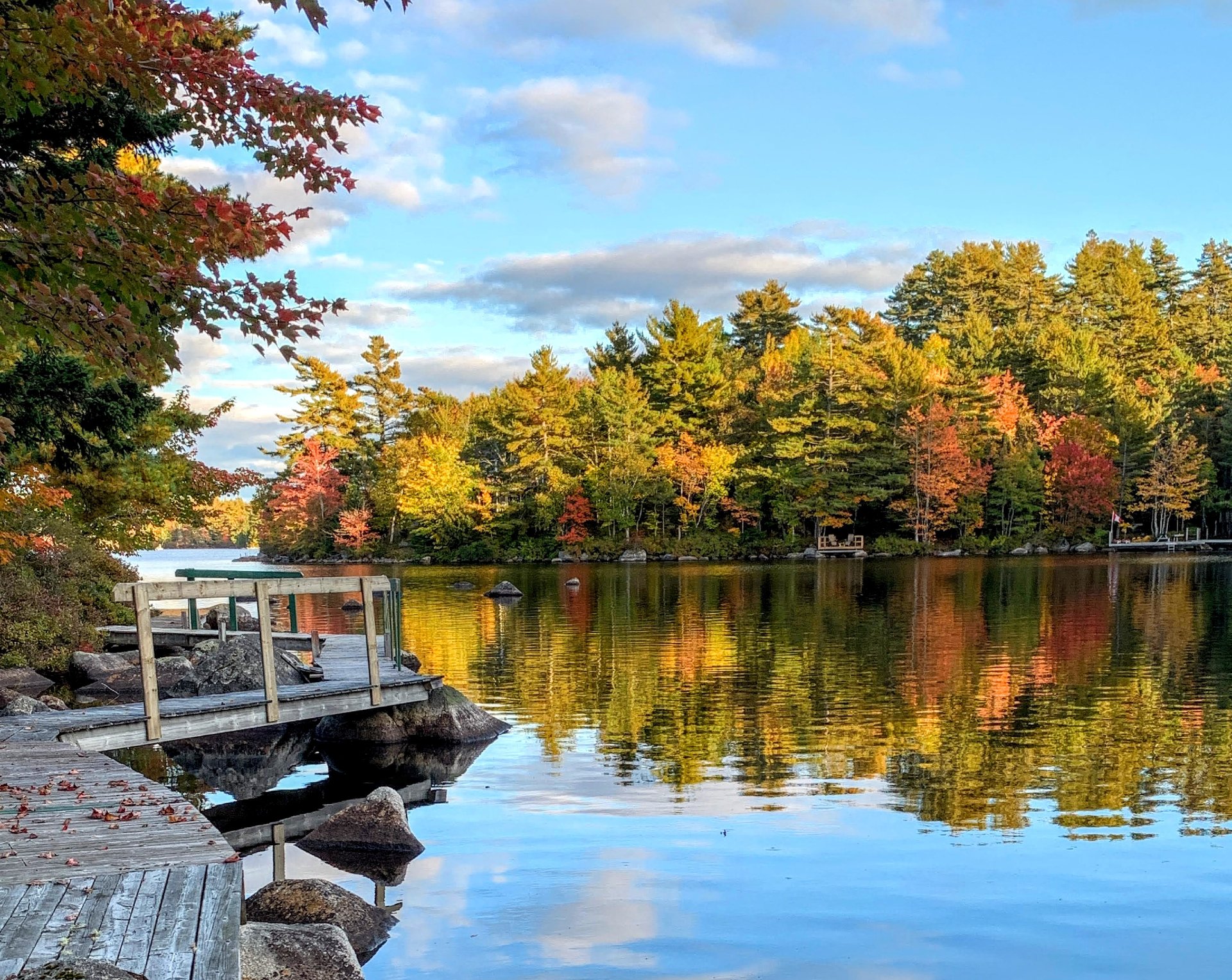