The Move: This Ontario family found space and affordability in Calgary

Life in the Prairies is working out nicely for Louie and Joy after relocating from Pickering, Ont. 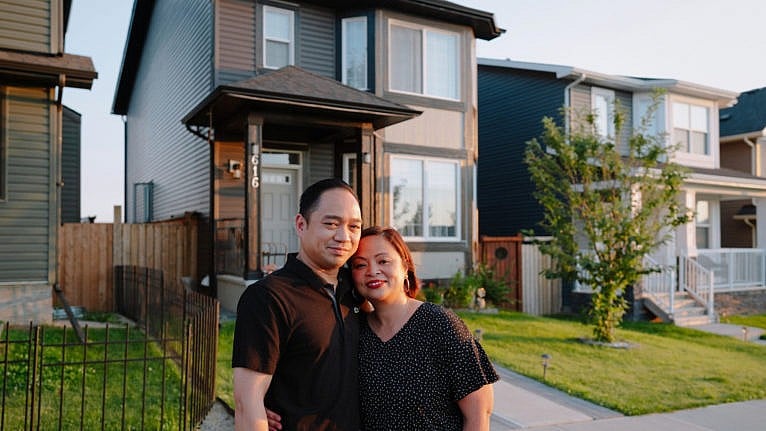 Louie and Joy pictured outside their Calgary home. (Photography by Allison Seto)

Louie Bantugan, a 37-year-old assistant manager at a fast-food chain, and Joy Hernaez, a 45-year-old business administrator at an insurance company.

The pandemic inspired a wave of Canadians to shack up with family, but Louie and Joy were ahead of the game. In 2016, the couple pooled funds with Joy’s brother and sister-in-law to buy a four-bedroom, three-bathroom semi-detached house in Pickering, Ontario, in order to save money and build equity. The property was roomy, and it had to be. In addition to the two couples, Joy’s niece and nephew, her 71-year-old mother, Corazon, and the couple’s shih-tzu, Ding, would be living there, too. During COVID, Joy set up an office in the living room—which had no doors—so she would often overhear other conversations, like her brother Edizon’s work meetings. “It felt cramped,” Joy recalls. “The kids were studying there, too.”

Last year, when their mortgage was up, Louie and Joy set out to buy their own place in the Pickering area with Corazon, so they could take care of her as she got older. They set a budget of $700,000, but even properties listed in their price range were selling in excess of $800,000. They viewed six places—detached, semis and townhomes—in the span of two months, and put in zero offers. “The market was crazy,” Joy says. “We couldn’t afford anything.” Louie’s company had locations across Canada, so they started considering listings that were further afield. Two of Joy’s Alberta-based friends suggested she look at places in Calgary, where real estate was miles more reasonable than in the Greater Toronto Area. “All I knew about Calgary was from friends who posted on Facebook that they’d gone to the Stampede,” Louie says. “We were thinking of living there as a new adventure.” 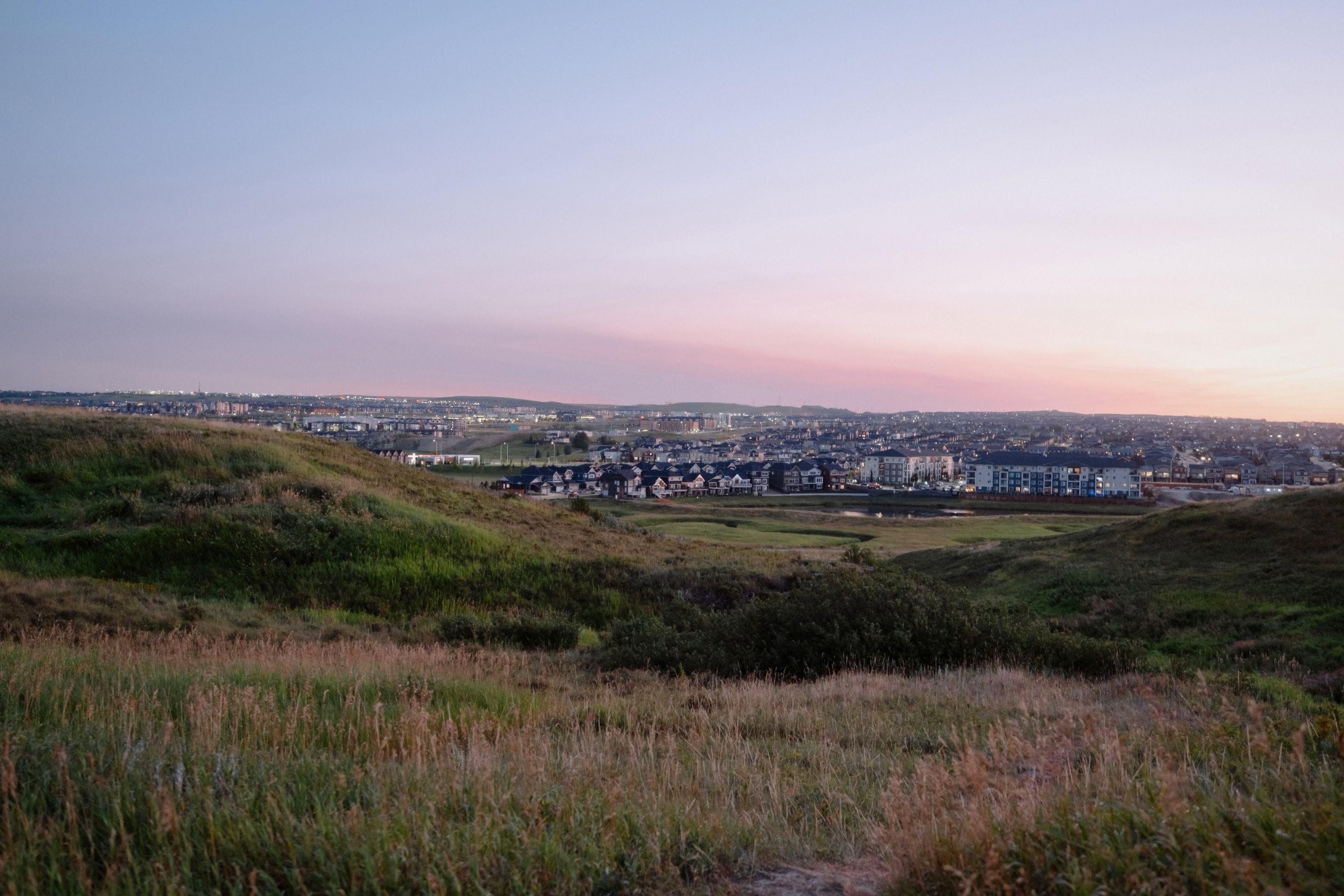 Since moving to Calgary, Louie and Joy have ventured to become a bit more outdoorsy, enjoying the Calgary scenery. (Photography by Allison Seto)

Joy and Louie booked a week-long trip out west in September of 2021, scheduling 13 viewings with the help of a local realtor. They were aiming to spend $500,000 on a two- or three-bedroom home with a finished basement and a main-floor office for Joy. The extra funds would go toward new furniture, scratching Joy’s interior-decorating itch.

They initially toured a couple of detached models in Calgary’s southeast end, but they lacked office space and stairs that Corazon could safely navigate. “I’m getting older too,” Joy says. “We needed a landing.” Each night, the couple shared photos and video-called with Corazon, who wasn’t picky—she just wanted more space to herself. Ten houses in, Louie and Joy were feeling discouraged but determined. “We weren’t willing to go back to Ontario without finding a new home,” says Joy. The 12th tour was the charm: they fell in love with a three-bedroom, four-bathroom detached model in the northwestern neighbourhood of Evanston. Enveloped in modern grey siding, the home had an open-concept kitchen, main-floor living and dining rooms and some all-important office space. 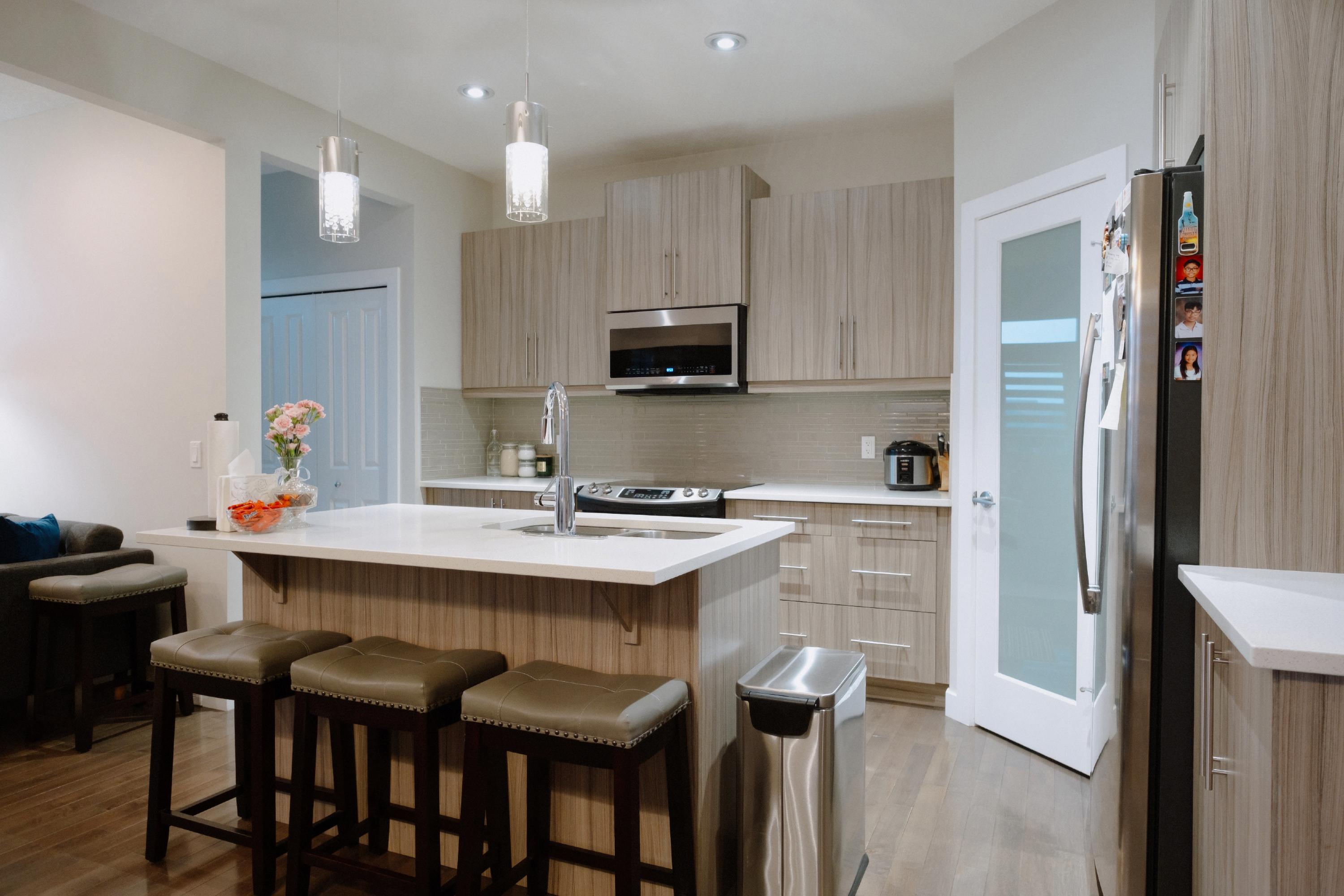 The couple’s open-concept kitchen in their Calgary home. (Photography by Allison Seto)

The second floor featured three bedrooms, plus a bonus room for Corazon’s sewing and soap operas. The backyard was fenced in, so Ding could roam (relatively) freely. Joy and Louie put in an on-budget offer of $500,000 after the viewing. The owners accepted and agreed to an October 2021 move-out date.

Life in the Prairies is working out nicely: Louie’s working at a new franchise of his old restaurant. Corazon loves having enough kitchen space to make pandesal (a Filipino bread). And Joy’s meetings are no longer interrupted by her brother. One major departure from Pickering is the scenery. “We’re trying to be more outdoorsy,” Joy says, adding that they’ve already visited Banff, Ghost Lake and even the Stampede. The family has welcomed a few visitors from Ontario, but no permanent stays—yet. Louie’s sister has eyeballed the area’s prices. Her son will be headed off to university soon enough, and she could be persuaded to downsize.

This article appears in print in the October 2022 issue of Maclean’s magazine. Subscribe to the monthly print magazine here, or buy the issue online here.