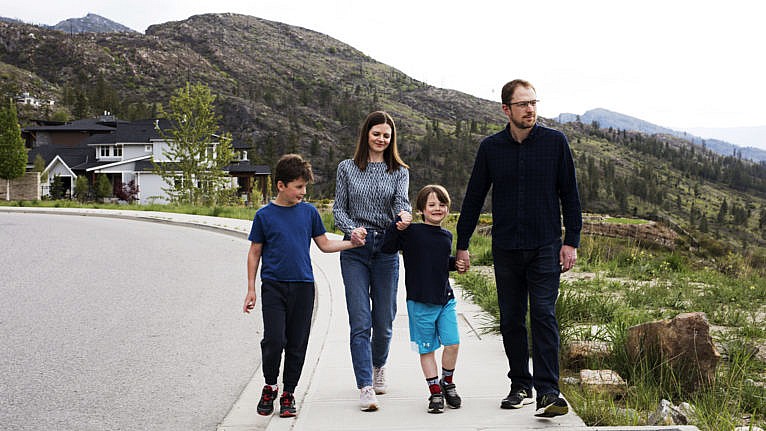 The Grants get to gaze at B.C.’s breathtaking Okanagan Lake on their daily neighbourhood walks. (Photography by Melissa Renwick)

The Grants’ former home in Toronto’s Beaches neighbourhood had lots of character. The semi-detached century home—purchased for $750,000 in 2015—had three bedrooms, two bathrooms, stained-glass windows and original wood floors. What it didn’t have was space: the kitchen was small, and brothers Jack and Charlie dutifully shared a single bedroom.

Things got even tighter when John began working from home during the pandemic. He took over Sarah’s office, which only deepened his long-held desire for larger living quarters. “Each of us needed more quiet space,” John says. He got in the habit of sending real estate listings to Sarah, who—despite her professional packing skills—wasn’t as inclined to move.

Her position softened during a trip to Haliburton, Ontario, in the summer of 2020. The Grants’ cottage was near a driving range, and they took full advantage of the breathing room. “We used to see friends indoors all the time,” Sarah says. “Then, during the pandemic, we focused more on outdoor activities, like biking. John took the boys golfing every morning in Haliburton, and they just loved it,” Sarah says. The couple also knew they had limited time before their sons started objecting to bunking together in Toronto.

The Grants initially considered renting out their Toronto house and temporarily moving to a waterfront property in Huntsville, a cottage town in Muskoka, but Sarah wasn’t sold. “It’s a beautiful vacation spot, but it didn’t feel like a year-round fit,” she says. They briefly entertained a renovation, but by that point, Sarah was making peace with the idea of selling. “I always said I would move for something, not just to leave Toronto,” she says. “I just hadn’t found the place that made me want to go.”

The city’s hold on the Grants loosened when a friend returned from a trip to Kelowna, B.C., in the summer of 2020 and raved about its beaches, general family-friendliness and mountain views. With their Toronto dream on its last legs, Sarah bought John a book called Houses by the Shore for Christmas. One of the featured homes was located on the nearby Scarborough Bluffs, which led them to scout out the area’s homes. None made the grade.

The couple finally asked their Toronto agent to put them in touch with a realtor in Kelowna. Incredibly, the first listing sent their way turned out to be the winner. “John took one look and said, ‘This is it,’ ” Sarah says. “It” was a five-plus-one-bedroom, four-bathroom detached home overlooking Okanagan Lake. The property was everything the Grants could ask for: it had a four-car garage, a primary bedroom with a walk-in closet and ensuite bathroom, a gorgeous modern kitchen, a large media room and a small swimming pool.

The neighbourhood was located in a stellar school district, close to bakeries and sushi (Sarah’s favourite) and within a 20-minute drive of three wineries and tennis and soccer facilities. The only trade-off was walkability—the house sat on a particularly steep part of the escarpment. That didn’t stop John and Sarah from entering a successful bid of $2.3 million in January. Soon after, Sarah found herself expertly packing up her beloved Toronto digs. In early May, the family—and, separately, their belongings—made the cross-country trek to Kelowna by car.

The Grants have had no problem meeting new families. “It seems like everyone I know has a friend here,” Sarah says. It’s been hard for them to believe their new life in Kelowna isn’t a vacation. This summer, the Grants are planning beach visits, exploratory weekend trips and plenty of barbecues with new friends. When Jack and Charlie took their first swim this spring, Sarah snapped a photograph that is a near carbon copy of the cover of Houses on the Shore, panoramic views and all.