The Jason Kenney government planned for sagging oil prices, not a full market meltdown. Will the premier now go cap-in-hand to Ottawa? 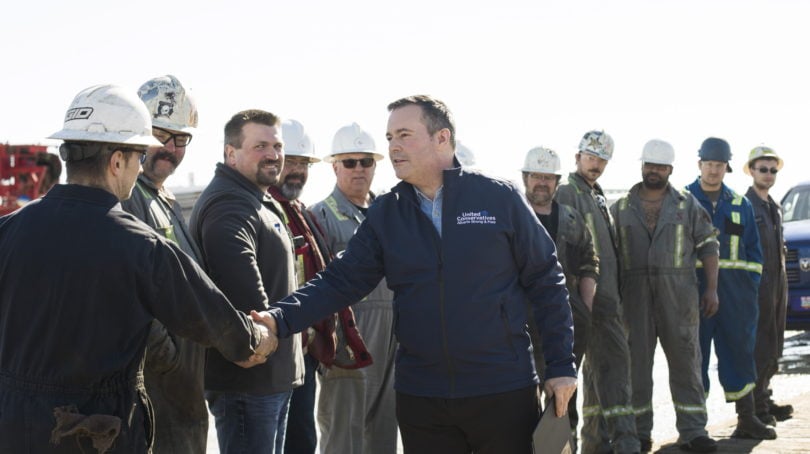 The bad news for Alberta government: its new budget pegs oil prices at US$58 per barrel, and prices crashed Monday to around US$30, even before the fiscal year begins next month.

The good news: well aware that oil prices are volatile in the best of times—let alone these non-best times—Alberta Finance devised various scenarios to brace politicians and the public for what might be to come.

The other bad news: The lower oil-price scenario forecast a 10-per-cent hit to the province’s income taxes and resource revenues this year.

The even worse news: That lower price scenario was for a price drop of US$6.25-per-barrel crude, not $28.

Alberta Premier Jason Kenney knew he was inheriting a leaky boat and choppy waters when he took the wheel last year. Almost nobody could have expected the simultaneous iceberg collisions that are the coronavirus sending energy demand off a cliff, and a bombastic Russia-Saudi spat flooding the market with tankers-full of excess supply.

Compounding crises like these tend to reshuffle a politician’s priorities. So it was, 10 months into Kenney’s mandate, that he placed balancing his province’s oil-reliant budget in his first term at the bottom of his priority list.

As for his deficit-erasing pledge: “I was always clear, however, that if we were sideswiped by a major global economic downturn, that that could be put at risk.”

This is at odds with what Travis Toews, his finance minister, had said repeatedly: if economic hard times come and revenue forecasts prove too rosy, his United Conservatives would slash spending further in steadfast pursuit of a return to Alberta’s crowd-pleasing surplus days. Kenney’s crisis-mode pivot signals this is no longer the case. He won’t erase spending cuts already in the budget, but he avoided any talk of additional gashes to the public service, and instead showed interest in stimulus spending like hitting the accelerator on infrastructure construction.

Yes, Alberta, there is a Kenney pragmatic streak.

RELATED: Do we really expect Canadian households to bail out the economy again?

He’s arguably the most conservative of all prominent Conservatives in Canada—fiscally, socially, and drill-baby-drillically. Yet while he’s stoked the furies of even soft environmentalists with his “energy war room” and his inquiry into foreign funding of green groups, Kenney has also maintained the 100-megatonne emissions cap on oil sands that Rachel Notley’s NDP government enacted, and fine-tuned a large emitters’ plan that keeps foot pressed firmly down on the coal sector and enough regulation on fossil fuel producers to meet Ottawa’s requirements. Those may not please the Alberta Conservative id, but Kenney also had to heed the pleas of international markets and energy companies themselves for a modicum of environmental credibility.

On the fiscal front, Kenney has been here before, as a minister in Stephen Harper’s cabinet during the 2008-2009 global economic meltdown. He watched Harper jettison his party’s anti-deficit orthodoxy and unleash the power of the state by nationalizing the auto industry and the two-year, $60-billion Economic Action Plan® to keep Canadians working. Would that sort of largesse have been the first choice of Kenney, a former head of the Canadian Taxpayers Federation? Probably not, but he gamely went on promotional tour to boost the plan.

Now Kenney runs a cabinet himself, and he’s apparently taking cues from one of his boss’ most non-ideological decisions. He’s holding off any relief measures until late spring or summer, when dust may settle on this mid-term crisis. But for the uncertain moment, Kenney’s Action Plan amounts to appointing economist Jack Mintz to chair an economic advisory council. When Harper’s finance minister needed a 2008 panel, he also tapped Mintz.

Politicians like to appoint task forces to put the expert stamp on policies they already wanted to pursue, and Kenney is very much a politician on this score. His blue-ribbon budgeting panel told him to dramatically cut spending, and a skeptically framed panel reviewing supervised drug consumption sites cast those facilities in cartoonishly villainous terms. I happened to interview Jack Mintz minutes before Kenney announced his appointment, and his views on the challenges facing the province mirror the premier’s own.

“It could be appropriate to try to at least cushion some of the impact and I think that’s probably what’s going to be needed now.

“I think Alberta’s probably going to have to spend some money now,” Mintz continued.“It still has firepower; the debt problem isn’t like some of the other provinces have.” Expect Kenney and his ministers stop grousing about Alberta’s debt as an existential threat to future generations, and start boasting about it having the lowest (or among the lowest) debt-to-GDP ratios.

That won’t sound like the Jason Kenney that progressives have come to know and dislike. But calamity has a habit of elbowing dogma out of the way.

While Kenney will plead for the patience of Albertans, whose nagging fears of a double-dip recession have now transformed to grim acceptance of a return to economic shrinkage, he’ll come to Ottawa’s premiers summit this week with cries of full urgency. Now, his province’s heavily emotional case for federal-provincial reforms will be matched with a fiscal case. Not only will Alberta’s premier come to meet Justin Trudeau and his counterparts with demands for back pay through the fiscal stabilization fund; the province will need fresh injections of this equalization-for-wealthy-provinces program to blunt the sharp impact of 2020’s resource revenue loss.

This year, Kenney wanted to show the world a confident Alberta, where recovery was underway and oil companies were expanding again—hopeful about new pipelines and appreciative of the provincial Conservatives. If he was going to come cap in hand to Ottawa, he would be doing so out of moral outrage, not fiscal need. The world had other plans, and Kenney must adapt to them.