Here's what Donald Trump tweeted about the stock market on its long march higher, plotted against the market's abrupt reversal, which has wiped out all gains made since 2016 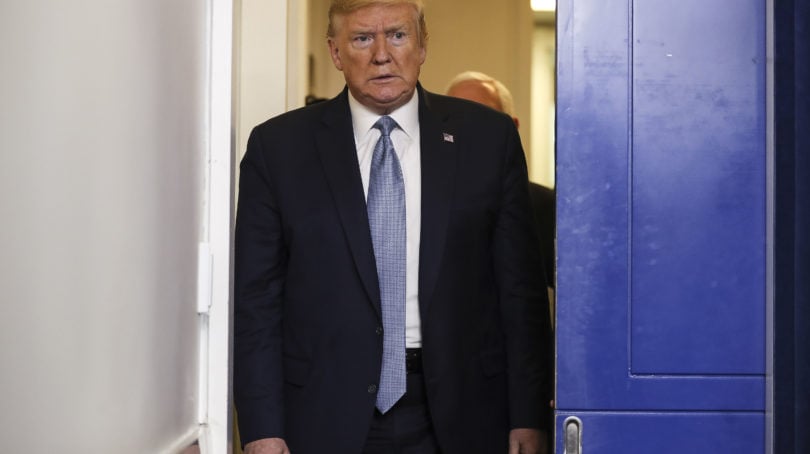 U.S. President Donald Trump arrives to a news conference in the briefing room of the White House in Washington, D.C., U.S., on Monday, March 16, 2020. (Oliver Contreras/Sipa/Bloomberg via Getty Images)

On Feb. 16, 2017 at 6:34 a.m., Donald Trump logged onto Twitter, the website where he’d spent so much of his time campaigning for the White House, and as president posted the first of many tweets to come that claimed credit for the rise in stock prices.

Since then Trump has pumped out nearly 130 tweets boasting about rising stock prices, his favourite barometer for what he sees as his administration’s success. And that doesn’t even account for the hundreds of speeches, rallies and press conferences where Trump has patted himself on the back for market movements. Like he did at a Milwaukee, Wisc., rally in January:

Out of curiosity, how are your 401Ks doing? Are you at 70, 80, 90 per cent, 97 per cent? What’s yours? One hundred per cent? Not bad. I know who he’s voting for. We have set 141 records on the stock market, highest levels ever in recorded history, 141 records. That means in less than three years, for 141 days, we set a record. Think of it. We’ve set 141 records. Who the hell can do that? And if our opponents had won the election, instead of going up — you know, we’re very close to 30,000 on the Dow, nobody thought that was possible including the fakers back there — instead of being up, massively, you would have been down 50, 60, 70, down at a level, you would probably be extremely depressed right now.

In short, no president in history has hitched the fate of his presidency so closely on the stock market going up. Even amid the rout of the past two weeks, when stock prices briefly rebounded, he couldn’t resist a tweet. “BIGGEST STOCK MARKET RISE IN HISTORY YESTERDAY!,” he wrote in all caps.

That was Friday. On Monday markets erased that meagre rebound, and closed at their lowest level in years. In fact, the Dow Jones Industrial Average index ended Monday below where it stood that morning on Feb. 16, 2017, not including dividends. Scroll down—way down—to see a selection of Trump’s tweets from when the market was rising, plotted roughly against the level of the DJIA’s as it plummeted 31.2 per cent since Feb. 12.