The life of a pandemic day trader

A booming market, the promise of easy riches—what could go wrong?! 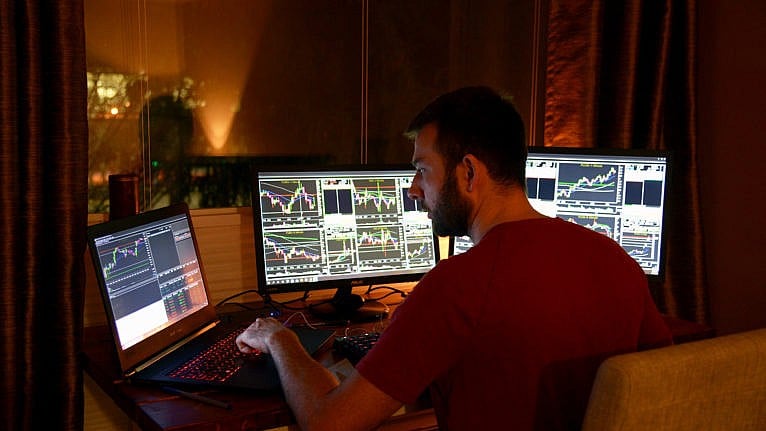 After months of research, Randelovic quit his job to focus on day trading just before COVID hit; ‘I’ve had to become comfortable with losing,’ he says (no credit)

In February 2020, just before the pandemic swept the globe, Milos Randelovic delved into the hectic world of day trading. For several months prior, the resident of Kelowna, B.C., had read trading books, scrutinized how-to websites and browsed YouTube channels where some day-trading influencers claimed easy riches could be made through rapid-fire speculation on investments. In those early first weeks, Randelovic, 33, even quit his job managing a heavy equipment dealer with an eye to bankrolling his own business from the proceeds of his trades. “With all the research I did following the markets every day, I felt I could make some good money,” he says.

As COVID-19 hit and caused markets to turn wildly volatile, Randelovic would soon be joined by thousands of other Canadians in a pandemic day-trading boom. According to Toronto research firm Investor Economics, during the first quarter of 2020, roughly half a million Canadians opened discount online brokerage accounts to access trading platforms offered by firms like Qtrade, Questrade, Wealthsimple and Interactive Brokers, as well as the big banks. Meanwhile in the U.S., the day-trading boom has seen novice investors flock to mobile trading apps like Robinhood. In January, that world exploded onto the front pages after retail traders, fuelled by bullish talk on Reddit, massively drove up share prices of struggling video game retailer GameStop in a dizzying ordeal that put Wall Street hedge funds, Robinhood and the day trading boom under the spotlight of securities regulators and legislators in Washington.

For all the frantic enthusiasm for day trading, it’s clearly not for the faint of heart. Randelovic can attest to that. Nearly a year out, the initial $10,000 sum he’d set aside to trade has shrunk by $6,500, despite rocketing stock markets during that time. “I found out, obviously, it’s much harder than how it’s presented in the media,” he says during an interview in early January, adding he continues to hone his trading skills with simulators these days instead of real cash. Day trading, he admits, “is addictive, like gambling.”

This isn’t your grandfather’s buy-and-hold mantra. In simple terms, day trading involves buying and selling the same financial instruments, like stocks, currencies, options and futures, in a single day. Day traders move in and out of investments in a matter of hours, minutes or seconds, trying to skim profits from even tiny movements in prices.

The pandemic brought together several conditions that sparked a surge in day trading, which first came to popularity during the 1990s dot-com bubble. Trapped at home during lockdowns, some turned to trading to alleviate boredom, while others sought to bolster their COVID-hit finances—online forums are filled with questions about the tax implications of day trading CERB payments. Perhaps more compelling than anything else, though, has been the pull of social media stars on YouTube, TikTok, Discord and other sites touting stocks and bragging about their portfolios.

“The Lambo lifestyle” has lured many into day trading, says Marc Hagel, a Toronto-based managing partner at Trade Context, a U.S. company that trains people to day trade on the S&P 500 futures exchange. He points to videos showing supposed traders posing with Lamborghinis and claiming to earn $1,000 a day in markets. While Hagel insists that with study, patience and self-awareness people can make money day trading, he warns against overinflated expectations. “If people think they are going to get rich trading for three months using government cheques, well, that’s not going to happen,” he says.

In fact, research has found the odds are stacked against day traders: one study from Taiwan, where day trading is widespread, found only one per cent consistently outperform the market. But day traders on social media touting their supposed gains will always speak louder than academic studies, especially when investors are caught up in a raging bull market; in January, the S&P/TSX composite index was up 62 per cent from its pandemic low last March.

Chris Parry, who runs Equity Guru, an investment research site geared to millennials, says novices jumping into day trading during the pandemic risk being sucker-punched by the market’s erratic divorce from economic reality. “They might get a good couple of trades in and make a surprising amount of money,” he says. But everyone is making money right now because markets are gripped by euphoria. “Everyone starts believing their own press,” he says.

The disconnect between markets and the economy could eventually bring a sharp reversal that would catch out many day traders, just as it did when the dot-com bubble burst. “Half the country is struggling to find work yet markets are up,” says Parry. “That points to something eventually catastrophic happening.”

If it does, day traders will need to be mentally prepared, says Andrew Aziz, the Vancouver-based author of How to Day Trade for a Living and founder of Bear Bull Traders, an online trading community where paying members (Randelovic is one) get access to psychology webinars and a team of psychologists. “Trading is not that complicated in terms of a secret sauce,” he says, but “it’s a game of psychology you use against yourself—the fear, the greed—that make for impulsive decisions.”

For Randelovic, the mental aspect of day trading has been the hardest part of his learning curve. “I’ve had to become very comfortable with losing,” he says, something others would do well to learn. “If that doesn’t happen, it’s going to be very tough for anyone to do this because it happens all the time.”