The world is in turmoil. And the stock market is... fine?

Many investors are still feeling bullish about the economy, despite all the volatility. Here's what's driving the market's rosy outlook. 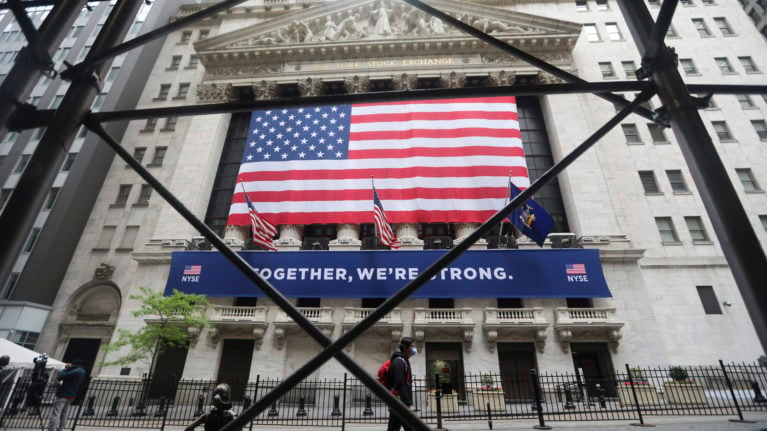 Stock markets hate uncertainty, or at least that’s what financial gurus have been telling investors for decades. Yet, equities have climbed by 36 per cent since March 23, after falling by 34 per cent, despite us living through one of the most confusing and uncertain times in human history. COVID-19 is still infecting thousands around the world daily, millions of people are out of work, the economy is contracting by record-breaking amounts and, now, riots are breaking out across the U.S.

You would think that with all that’s going on that people would be pulling their money out the market and stuffing cash under their mattresses, but that’s not so. If America’s S&P 500 rises by another 10 per cent in June, stocks will have rebounded to their pre-bear market levels (a bear market is a market decline of 20 per cent or more) faster than ever before. With the world still dealing with so much economic devastation, and with a COVID-19 resurgence a real possibility, many investors are nervous about putting more money into the market, but at the same time, they don’t want to miss out on more gains. So what should they do?

Optimism for the future

There are two stock market misconceptions that make what’s happening now so confusing. One is that the stock market and the economy are one and the same—they’re related, but markets and GDP growth often move in different directions—and the other is that equities react to what’s happening in the moment. Over the long-term, share prices are forward looking and, right now, analysts and investors are expecting the economy to bounce back sooner rather than later. “When the markets tanked in March, there was an expectation that we’d be in a dramatic depression style event,” says Nikolai Roussanov, a finance professor at Philadelphia’s Wharton School. “Now there’s a more reasonable expectation of what corporate profits will be.”

Roussanov knows that people are experiencing some cognitive dissonance when they see what’s happening in the news and when they look at their portfolios, but there are several reasons as to why investors are feeling bullish, even though so much uncertainty remains. The big one is that government support, such as the Canada Emergency Response Benefit in Canada and the $1,200 stimulus cheque in the U.S., has helped keep people afloat. Ultra-low interest rates—Canada and America’s overnight rate, a short-term lending rate that impacts fixed income yields is at 0.25 per cent—also helps stocks as investors can earn more in equities than in bonds.

Most importantly, though, is that analysts think that companies will soon start earning money again and earnings are what ultimately drives stock prices. While there are exceptions to this rule (see Amazon) if a company makes money during a quarter, and preferably more than what analysts expect, then its stock price will rise. If it loses money, or earns less than analyst expectations, its stock price declines. With the global economy now starting to open up, earnings should start climbing again.

Sam Stovall, managing director of U.S. equity strategy at CFRA Research, says that earnings growth among S&P 1500 companies (an index that covers 90 per cent of the U.S. market) is expected to rise by 32.6 per cent in 2021, while U.S. GDP could rise by 28 per cent in the third quarter after declining by an estimated 37 per cent in the second quarter. The S&P 500, he thinks, could be down 24 per cent in 2020, but will rise by 30.5 per cent next year. “We’ve already factored in the negatives,” he says. “So the only way anyone can be surprised now is by the positives. And that’s what’s happening—people are saying the world is not coming to an end as a result here’s an opportunity to make money.”

Of course, analysts are often wrong and, as we saw with the pandemic, which seemed to come out of nowhere, anything can happen, says Stovall. If the economy recovers slower than expected—many people had been hoping for a quick rebound and what’s called a v-shaped recovery, but more experts are now expecting a prolonged U-shaped economic recovery—if infections increase in a major way, if a vaccine never arrives, if the U.S. takes more action against China for its role in the crisis or if the political situation in the U.S. gets worse, then markets could plummet again, he says.

Tom Bradley, co-founder of Vancouver’s Steadyhand Investment Funds, isn’t surprised that the market has rebounded after such a quick decline, but it’s climbed faster than he expected. “The rally has been more powerful than I would have thought,” he says. “The risks, uncertainty and the number of possible outcomes is as wide as I’ve ever seen it in my career, yet the market’s focused on a rosy outlook.”

While he bought a lot of stock in March, he hasn’t been as active lately, in part because equities appear to be expensive again. Still, others may not want to wait around for another drop that may or may not come. If you have money to invest—and many don’t right now, which is another problem that could force people to delay their retirement or temper their future goals—then consider dollar-cost averaging, which is when you put a little bit of money into the market each month, rather than a lump sum all at once. If the market falls again you won’t lose a lot, and while you might not earn as much on the upside as you’d like, you will still benefit from the rebound. “Baby steps,” says Bradley. “It’s so hard, behaviourally, to get back in after the market drops so much, so doing it incrementally helps.”

At the very least, investors should brace themselves for more ups and downs, which can be harder to stomach than a big drop. It’s hard to sell everything when the market falls so quickly (an investing mistake as most people never buy back in at the right time), but it’s easy to get queasy when the market bounces around. Own a diversified portfolio of stocks and bonds—bonds tend to rise when stocks fall—take a deep breath and focus on your long-term financial goals, says Roussanov and take comfort in knowing that markets do tend to climb over time. “Volatility will be with us for a while,” he says. “And while there is no guarantee that the market will rise over time, that has certainly happened historically.”