What happens if U.S. Congress fails to pass the new NAFTA deal?

The consequences for Canada could be bad—very bad, say experts. But not every scenario is bleak. 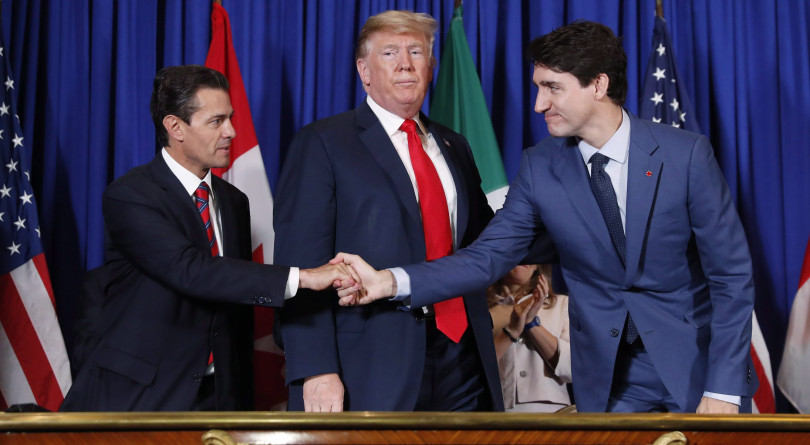 The White House is starting to refer to it as “Plan B.”

After 15 months of trilateral trade negations amid threats from President Trump that he’d terminate NAFTA—“the worst trade deal in the history of America,” as he’d say—three countries finally reached an agreement in late 2018 on the framework for a new deal. It had a new name: the United States-Mexico-Canada Agreement (USMCA), sometimes referred to as NAFTA 2.0. Or, as Canadian officials attempted to style it, CUSMA.

Then, not long after the three country’s leaders proudly announced the USMCA, U.S. Democrats won back a majority in the House of Representatives and Speaker Nancy Pelosi opposed bringing the trade deal before Congress for a vote until her party could force some changes to the deal.

Canada, though, refused to open up talks after the fact to appease Dems. The White House was equally set against the idea. So while the USMCA framework remains in place, its future is now very much limbo.

The former option means the status quo—business as usual under the deal that so offended Trump. The latter, if Trump followed through on his withdrawal threats, would put immense pressure back on House Democrats to sign the updated deal or risk many of America’s businesses suffering from widespread uncertainty over cross-border trade.

RELATED: The new NAFTA is in danger of dying—from lack of interest in Washington

Unlike previous threats from Trump to withdraw from NAFTA, this time Canada would have little, if any, ability to influence the White House’s decision.

In any case, if the Democrats do opt to kill the USMCA—or let it die on the vine—much for Canada hangs on the way things play out from there. So what are the likely scenarios?

Throughout his presidency, and even before it, Trump has revealed a pattern when it comes to trade deals, says Gary Hufbauer, a non-resident senior fellow at the Washington D.C.-based Peterson Institute for International Economics. “He likes headlines. He likes surprise. And from what we know in the polls, taking a tough stance on trade doesn’t hurt him with his base.”

If Pelosi outright refuses to advance USMCA legislation, Hufbauer says, “Trump will be highly motivated and, more likely than not, will send a letter terminating NAFTA to Prime Minister Trudeau and President Andrés Manuel López Obrador.” He considers the letter a 70 per cent probability—but a letter, he notes, “is not the same as termination.”

The letter would start a six-month countdown required by NAFTA before the U.S. could officially withdraw from the deal—and it would almost certainly open litigation as to whether a president can unilaterally pull the country from any trade deal.

In the interim, with the letters delivered, Speaker Pelosi and her team will be on the clock, says Dan Ujczo, a trade lawyer specializing in Canada-U.S. relations. “The reason is, the president can then go on the campaign trail and say ‘I got you a new trade deal. This is the best we can get from Mexico and Canada. And it’s the Democrats who won’t help you voters out in Ohio, Pennsylvania, Michigan.’”

While termination of NAFTA would do a lot of economic harm to America, not to mention both Canada and Mexico, “the key issue is not the economic harm,” agrees Hufbauer. “It’s who takes the blame.”

If polls suggest Trump would take the blame for NAFTA’s demise, “then he would delay [NAFTA withdrawal],” Hufbauer says. “He could send the letter and when the date comes he’ll say ‘we’ll give the Democrats more time.’”

But if the Democrats are deemed by most Americans as the party at fault for trade uncertainty—“then it’s more likely NAFTA gets terminated without USMCA in place.”

RELATED: What a Democrat-controlled House means for the new NAFTA deal

Any American who works in an export-oriented industry that relies on Mexico or Canada would quickly become aware of his or her job being at risk stake as the six-month NAFTA termination clock ticks, Hufbauer predicts. Based on electoral arithmetic—and Democrats not wanting to lose seats in Congress—he says it’s possible there would be enough Democratic congressmen to vote with Republicans in favour of the USMCA to get it passed.

But that assumes Speaker Pelosi brings USMCA to the floor for a vote, at all, which is increasingly in question.

The Democrats insist they aren’t opposed to free-trade deals. Pelosi maintains she wants negotiations to re-open on USMCA to address important issues regarding pharmaceuticals, workers’ rights, the environment, and to get stronger enforcement provisions in the deal.

But what the Speaker really wants, says Dan Ujczo, a trade lawyer specializing in Canada-U.S. relations, is to deprive Trump of the chance to trumpet delivery of a campaign promise before the 2020 U.S. presidential election: “This is about 2020 politics, not policy.”

Canada, of course, would be largely unable to exert influence on these events, experts say, other than continuing to stress to American politicians the importance of having a trade deal in place. But the effects would be felt all the same.

Should the Trump administration trigger the NAFTA withdrawal notice—even as a tactic to move the [USMCA] deal forward—”the consequences for Canada would be immediate and negative,” says Meredith Lilly, an associate professor and the Simon Reisman chair in international affairs at Carleton University. “While the trade deal would remain in effect for a minimum six-month period, the broader signals about Canada’s competitiveness and being an attractive destination to invest would take a serious hit.”

Thus, presumably, would begin rounds of litigation in the U.S. courts over the president’s executive authority on trade deals, creating still more risk for Canada. “While all this uncertainty continues, capital investment in Canada will not be made,” says Lawrence Herman, a Toronto-based international trade lawyer. “People will shy away from putting money into plants, equipment, offices, development of services—including software—and prefer to put their money in the United States.”

Trade will still continue between Canada and the U.S., he stresses, but it won’t be preferential: “The notion that Canada is a launching pad for access to the U.S. market will disappear.”

Between the politics, polling and court cases that would almost certainly wind up in the U.S. Supreme Court, Ujczo can’t see a scenario between now and the U.S. presidential election in November 2020 where neither NAFTA nor the USMCA is in effect.