What will happen if Trump slaps a 25 per cent tariff on Canadian-made cars?

It would be 'pretty disastrous' for this country, say experts. But Americans would pay a steep price, too. 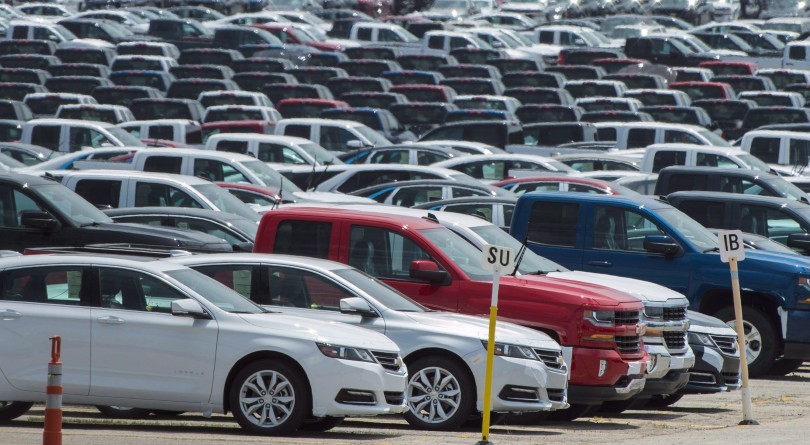 With each passing day, Donald Trump’s talk about slapping a 25 per cent tariff on imported cars sounds less and less like an Art of the Deal negotiating bluff.

Such threats—against Canada, specifically—were renewed earlier this week as the U.S. president announced his country had reached an agreement with Mexico as part of the NAFTA negotiations, leaving Canada the odd country out.

“They [Canadians] have tariffs of almost 300 per cent on some of our dairy products. We can’t have that. We’re not going to stand for that,” Trump said during his press conference. “I think with Canada, frankly, the easiest thing we can do is to tariff their cars coming in. It’s a tremendous amount of money and it’s a very simple negotiation. It could end in one day, and we’d take in a lot of money the following day.”

Cue Canada’s foreign minister, Chrystia Freeland, who cut short a work trip to Europe to fly to America and try to re-negotiate NAFTA before Trump does anything drastic.

“It’s so difficult to predict Donald Trump’s reaction,” says Royce Mendes, a senior economist at CIBC Capital Markets. “But the fact that he mentioned it directly in his conversation with the Mexican president raises the possibility these auto tariffs could be slapped on Canadian-produced cars.”

Listen to Aaron Hutchins talk about auto tariffs on The Big Story podcast.

The good news, if there is any, is Trump’s threat of such a tariff has been looming for so long that economists and auto industry experts have had time to crunch the numbers to estimate what the impact would be to Canada’s economy.

Thousands of people in central Canada would be out of work. The hit to Canada’s GDP could be enough to put Ontario—perhaps even the country—into a mild recession. Meanwhile, the U.S. wouldn’t have anything in the manufacturing sector ready to make up for a shortfall in supply; Americans would soon be paying thousands more to buy a car.

It’d be a losing scenario for both countries, then—though Canada would come out as the biggest loser. As John Holmes, a Queen’s University professor emeritus and research fellow at the Automotive Policy Research Centre puts it: “It would be pretty disastrous.”

The key thing to understand is that the immediate negative impact would be seen first by the American consumer.

Let’s say a vehicle’s sticker price is in the $40,000-$50,000 range, “at the border they come across between $20,000-$25,000 —and that’s where the 25 per cent duty would be applied,” explains industry analyst Dennis DesRosiers, president of DesRosiers Automotive Consultants. In short: automakers would pay an extra $5,000-$7,000 for the vehicle they plan to sell. “Unless the auto companies chose to eat some of the extra costs, it would price most of those vehicles out of the marketplace,” DesRosiers says. “There’d be no choice for consumers.”

Americans won’t be keen, for example, to pay thousands extra for a Toyota RAV4 simply because it came from Canada—meaning the nearly 1.8 million vehicles Canada ships south of the border annually would have a much tougher time finding a home. And it’s not as though Uncle Sam has an empty factory ready to be fired up to make millions of tariff-free cars.

“Assuming there was an adjustment in production allocations, it’s going to take significant time to achieve that,” Holmes says. “At the moment, there’s very little unused assembly capacity in the U.S. So where do you make up almost two million vehicles that you’re making in Canada?”

Not to mention, many of those Canadian-made cars include parts that come from the U.S.—as part of a complex supply chain that’s developed over decades. Currently, Canadian companies ship $35 billion worth of auto parts each year, many of them to assembly plants in the U.S., and the parts trade flows in the opposite direction. If you’re going to cut off vehicle production in Canada, you’re indirectly reducing the demand for U.S.-made parts, Holmes adds.

Moreover, with no assembly plant ready in the U.S. to immediately boost production, DesRosiers says there will be a shortage in the overall supply of automobiles, meaning the price for all vehicles in America—and not just ones shipped from Canada—will inevitably start to creep higher and higher. “A Grade 12 student could figure out this is bad for the U.S.” he says.

Painful as it would be for American consumers, though, it would be significantly worse for Canada—especially Ontario. According to a recent TD Economics report, which looked at what would happen if America imposed tariffs of 25 per cent on fully assembled vehicles  in Canada and 10 per cent on auto parts, it would cost Canada upwards of 160,000 jobs, the bulk of them in Ontario.

RELATED: Can Trump shut out Canada and cut a trade deal with just Mexico?

“It would be devastating to vehicle assemblers and automotive parts manufacturers,” DesRosiers says. And it wouldn’t matter if they work at American-owned auto companies like General Motors or overseas companies like Honda or Toyota. The cars are, for the most part, being sent south of the border, meaning the tariffs will apply to all of them.

The next great unknown is whether Trump would choose to punish Canada alone, or put levies on all foreign countries sending the U.S. their vehicles. If there were a blanket tariff of 25 per cent on all countries, for example, a CIBC Capital Markets report found Canadian auto production would drop by about 400,000 units per year, which would shave 0.5 per cent off Canada’s GDP.

And if the retaliation is against Canada only? “The impact if far more severe because it’s easy for American consumers to avoid buying a car produced in Canada,” says CIBC senior economist Royce Mendes. “They can buy a car made in Germany, Japan or the U.S.” In this scenario, Canadian production would decline by about 900,000 units per year, according to the report, which drags down Canada’s GDP by one per cent.

“In either scenario, there’s the likelihood it leads to a mild recession in Ontario because if you look at distribution in Canada, it’s almost all focused there,” Mendes says.

Is it worth fighting back?

RELATED: In the U.S.-Canada trade war, we are not blameless

“But automotive is such a high-value product, you couldn’t find enough tariffs with non-automotive goods to countervail on,” DesRosiers stresses. “And if they countervailed on U.S. automotive goods coming to Canada, then every dealer in every jurisdiction across Canada would be seriously compromised.”

If Canada responded in kind with 25 per cent tariffs, then 100,000 jobs would immediately be at risk, according to a recent analysis from the Canadian Auto Dealers Association (CADA). Many of those jobs would be in manufacturing, says CADA chief economist Michael Hatch, but could also include as many as 30,000 jobs at dealerships across the nation. And for cars, Canadians could expect to pay an extra $5,000 to $9,000 per vehicle. “It’d effectively be a multi-billion-dollar tax on ourselves,” Hatch says.

For months, Canada has waited to see what, if anything, will come from Donald Trump’s threat of significant auto import tariffs. But while the two countries seek common ground in ongoing NAFTA talks, the lack of a resolution, coupled with Trump’s rhetoric, has been a dark cloud handing over the Canadian auto industry.

The long wait has been cause for “tremendous uncertainty,” says Holmes. “That uncertainty translates to companies not making decisions about new investment into existing plants or green-field investment into Canada until the rules all become absolutely clear.”

But it’s not only auto sector CEOs waiting on a resolution. Any uncertainty in Canada-U.S. trade weighs heavily on business investment decisions, in particular those north of the border. “Once you put 25 per cent tariffs on Canadian autos,” Mendes says, “what’s to say your industry isn’t next?” And to say this kind of trade action would stir uncertainty is a gross understatement. Trump is talking about a move that would cripple the Canadian economy and harm an industry that for the better part of a century has benefitted both countries. It seems a grossly disproportionate way to squeeze concessions from Canada on comparatively smaller issues like supply management, dispute resolution mechanisms or duty-free purchasing limits.

If the president follows through, it has the potential to rupture the U.S.-Canada trading relationship worse than anything in recent memory.