A hairstyling program that considers the meaning of hair's history 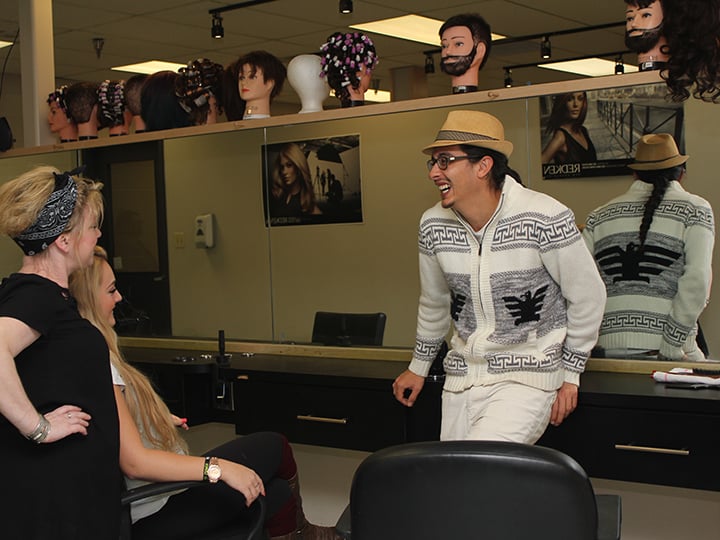 Except for the occasional quarter-inch trim, Andrew Judge hasn’t cut his hair in nine years. The Aboriginal education coordinator and adviser at the College of the Rockies in Cranbrook, B.C., says to do so would be “disrespectful to the ancestors.”

These words, from a talk he gave in September to 11 students from the college’s hairstyling program about his “personal journey with hair” may seem flippant—but they are anything but. As an Ojibwe man, Judge informed the students that his hair, which reaches halfway down his back, has a direct tie to his ancestors. His people believe the ancestors are part of the environment, from the food they eat and the rocks used in sweat lodges to the hair on their heads.

There was important symbolism in Judge’s talk, which was also giving a nod to reconciliation. Hair played a role in the cultural genocide that occurred in residential schools, according to the University of British Columbia’s First Nations Studies Program. As part of the mandate “to kill the Indian in the child,” the students would have their hair cut off “to assimilate them into the dominant culture.”

Situated on the traditional territory of the Ktunaxa Nation, the college has deep connections to First Nations peoples, so speeches like Judge’s are an effort by the college to make truth and reconciliation about the atrocities committed in Canada’s Indian residential schools part of daily life on campus.

Gwen Stewart, hairstyling instructor at the college, says the original idea she had was a talk about headdresses as part of the “history of hair” curriculum. “I didn’t know how to approach it,” admits Stewart. But Judge offered to chat about his own personal and cultural experience with growing his hair.

For him, it began with a vivid “joyful” dream nine years ago, in which he was surrounded by Indigenous people, working with youth, and had long, flowing hair—a contrast to his then-brushcut style. He recalls that when he awoke, “I said, ‘I will never cut my hair again.’ ”

Among the hairstyling students listening to Judge in the college’s Aboriginal Gathering Place was 16-year-old Hailey Barr, who says that she had never considered there was meaning behind the long hair she’s often seen among some Indigenous people. “I did not expect [hair] to be so sacred to them,” she says. “It’s a way of life for them,” she adds shyly, “and I thought that was cool.”

FILED UNDER: College of the Rockies Editor's Picks