Add tech to a humanities degree to bridge the employment gap

Adapting to a brave new job world, schools offer flexible programs so students can add tech to their humanities focus, and vice versa 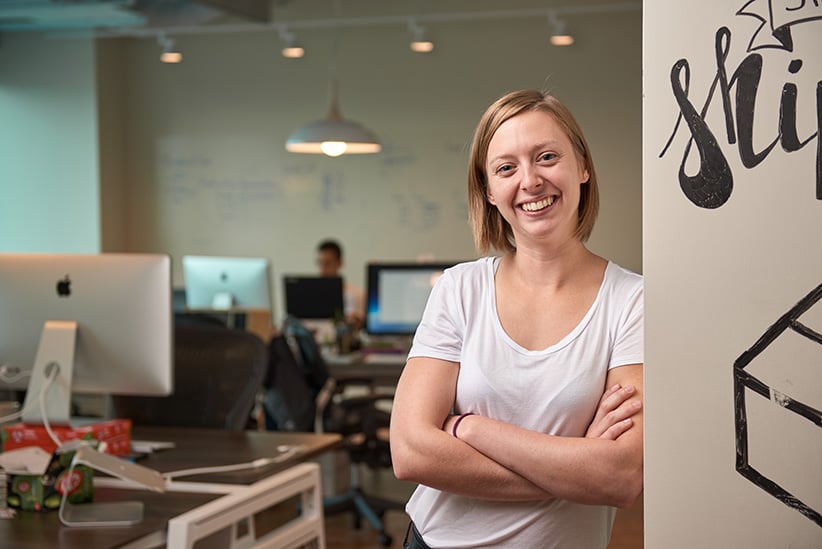 Gillian Massel, a project content strategist at Shopify’s headquarters in Ottawa. Massel, who holds a bachelor’s in English literature from McGill University and a master’s in the subject from Dalhousie, traded in Shakespeare for a career in tech. Initially, she thought her future was in academia. Instead, she’s writing content for the apps and software that Shopify develops, and dealing with “the nitty gritty details to the biggest abstract ideas about what Shopify’s voice and tone should be. (Photograph by Jessica Deeks)

There are a million choices facing high-school students and parents, from what to study and where to study it, to the big questions on the value of a liberal arts degree and the skills required in a rapidly changing workforce. Join us Nov. 24 at Concordia’s D.B. Clark Theatre in the Henry F. Hall Building from 6:30pm to 8:30pm to hear educators, business leaders and students tell you what to study and why and how to get the job you want. Rebecca Duclos, dean of Concordia University’s faculty of fine arts, will be speaking about the STEM to STEAM movement. Register for the event here.

Julia Hickey always knew she wanted to be a doctor. But instead of following the traditional science route, Hickey opted for something more liberal: French studies with concurrent minors in biology and chemistry.

“I got the advice when I was younger to study something else during my undergrad, since the rest of my life and career will be dealing with science,” says Hickey, a physician’s daughter, who grew up in Boston.

Since graduating from Duke University in 2011, it has been. Hickey, 27, spent a year as a research assistant at the Massachusetts Institute of Technology, then another four years studying medicine at McGill University in Montreal. She’s now doing a combined pediatric-anesthesiology residency at Harvard Medical School in Boston.

But her French literature background was not wasted. Even her undergraduate thesis, on Honoré de Balzac’s La Comédie Humaine—a series of books about the human condition—has been a beneﬁt in her science-saturated world. “I wouldn’t say I think back to all of these books I read when I’m actually actively dealing with patients,” she admits, “but I think it makes it easier to see patients and children as people and not just as the diseases they have and the medical problems that you’re treating them for.”

Though it’s a jump from prose to pediatrics, Hickey is not alone in her quest to bridge the gap between liberal arts and what is colloquially known as STEM (science, technology, engineering and math).

Rebecca Duclos, dean of Concordia University’s faculty of fine arts in Montreal, developed a program in 2015 called Foyer, fondly nicknamed “graduate student speed dating.” It hooks up students from different Concordia faculties and gives them a space to discover how their disciplines mesh. “I think what is motivating us most is an empathic desire to see how others see the world,” Duclos says. “There is a need for all of us across the ﬁelds of inquiry to expand and reﬁne our understanding and appreciation of different modes and methodologies for investigation.”

Duclos will be speaking about the STEM to STEAM movement, which aims to add arts skills to tech education, at a Maclean’s-Concordia Town Hall on the future of education and the future of work that will be held at the Montreal school on Nov. 24.

The University of Ottawa is implementing a similar program at an undergraduate level this fall. Teams of digital humanities students and engineering students will work together on Ottawa-related projects, such as developing an app that uses GPS to connect tourists visiting Ottawa for Canada’s 150th birthday celebrations to interesting places related to Canadian culture, or creating augmented reality glasses that allow a user to see how ancient artifacts in museums were used in a real-world context.

“I think everybody comes out richer for those kinds of partnerships,” says Kevin Kee, dean of Ottawa’s faculty of arts. “Digital humanities is really charting the path forward, and it’s in partnership with everybody else.”

Digital humanities, at its core, is about sharing information using computers and the Internet. Kee, who was Canada Research Chair in digital humanities at Brock University before moving to U of O, says subjects like philosophy, history, literature and psychology teach students skills that are “transcendent.” Adding a technical background makes them really useful—and, according to one report, helps students make more money.

Between June 2012 and July 2013, Boston-based analytics ﬁrm Burning Glass Technologies pored through 3.8 million entry-level job postings across the United States and discovered that when a liberal arts grad paired a technical skill—marketing, sales, social media, graphic design, computer programming—with their education, the number of jobs available to them doubled: from 955,000 to 1.8 million. And the salary premium increased by 14 per cent. Matt Sigelman, the company’s CEO, says students aren’t resigning themselves to a life of poverty if they decide to pursue a classics degree, they just need to “bridge that last mile.”

“What we see is that there’s a gap between what those students have learned, and then the last mile of skills that make those students employable,” he explains.

The two technical skills that bumped up salary the most were computer programming and data analytics. But knowing the ins and outs of social media was another highly sought skill, and although it wasn’t accompanied with a huge salary increase ($3,400), it unlocked 40 per cent more jobs. “A lot of companies look to their younger hires to bring with them command of technology and channels that are more alien to their digital illiterate superiors,” Sigelman says.

It’s not just about technical skills. The single biggest skill employers sought for software development jobs was writing. “Not writing code, but writing,” he underlines. And one in three of the skills employers ask for is a soft skill, or “foundational skill,” meaning it’s equally important for STEM students to be ﬂuent in the skills fostered in a liberal arts setting, such as teamwork, problem solving and writing.

Even Google’s senior vice-president of people operations, Laszlo Bock, has said the search engine company looks for employees who understand not only statistics and physics, but also psychology. “You need some people who are holistic thinkers and have liberal arts backgrounds, and some who are deep functional experts,” he told the New York Times in 2014. “Building that balance is hard, but that’s where you end up building great societies, great organizations.”

Shopify, Canada’s rapidly growing e-commerce company, uses phrases like “positive customer-facing service experience,” and “comfortable learning through osmosis,” and “team ﬁrst approach” to describe its ideal candidates for a technical support specialist position. But it pairs that with experience in technical support, front-end web development, and understanding acronyms like JSON/XML and MySQL and SSLs.

Anna Lambert, director of talent acquisition for the Ottawa-based tech company, says Shopify is always looking for people from diverse backgrounds with diverse interests. “We’re very intentional about making sure our requirements are actually requirements,” she says. “This opens up a lot of our job postings to people who don’t have a traditional background within that ﬁeld.”

Take Gillian Massel, a project content strategist at Shopify’s headquarters in Ottawa. Massel holds a bachelor’s degree in English literature from McGill University and a master’s in the subject from Dalhousie University in Halifax, but traded in Shakespeare for a career in tech. Initially, she thought her future was in academia.

Instead, she’s writing content for apps and software that Shopify develops, and dealing with “the nitty-gritty details to the biggest abstract ideas about what Shopify’s voice and tone should be.”

The 25-year-old says people think you need to know how to code to work at a tech company. Although she does do a bit of coding now, it was something she learned on the job. “One of the things my degree taught me was just to care really deeply and passionately about something. That’s a skill and that’s not something we should take for granted,” she says. “I think the purpose of university should be, and should hopefully remain, to a certain extent, to pursue knowledge for knowledge’s sake.”

Some universities are responding to the call for a diversiﬁed skill set in both tech and arts by combining disciplines within degrees, catering to student interests and the future of work by diverging from the traditional university experience of declaring a major, or possibly two, and being restricted in course selection by those choices.

McMaster University’s bachelor of arts and science, which has been around for more than three decades, is one example of that. The ArtSci program doesn’t belong to any one faculty, instead it draws professors from all six. It takes 60 to 70 students a year, many of whom pursue a professional program like medicine or law after graduation.

Half of the required courses are speciﬁcally designed for the program and include things like Argumentation and Visual Culture Inquiry; the other half are electives, which can be in arts or science.

“They can take biology one term and English the other. Or they can cluster their electives and specialize in a particular discipline,” says director Jean Wilson. “It gives them the latitude to have their cake and eat it, too.”

Then there’s the University of Waterloo’s bachelor of knowledge integration (B.K.I.). What makes it different, says department chair Rob Gorbet, is that it has a smaller number of core courses and emphasizes “design thinking”—a group-centric, holistic approach to problem solving.

Tiffany Lin and Delaney Swanson both have a B.K.I. from Waterloo, but their interests couldn’t be more different. Lin, who graduated in 2015, focused on computer science and sociology in her undergrad, whereas Swanson, who graduated two years earlier, centred her studies on anthropology, French, and international relations.

Lin, 24, now works as a research associate in Boston, at Harvard University’s Berkman Klein Center for Internet & Society. “I’m thrown a lot of different topics all the time and I need to learn really quickly and be able to have an informed opinion,” she says. “K.I. really helped me develop an interesting way of looking at problems, both theoretically and practically.” Lin hopes to eventually get into law school.

“I think it’s really helped us in just being able to jump in,” says 25-year-old Swanson. Her background has helped in her role as a “professional problem solver” at the consultancy agency Overlap in Kitchener, Ont. “Knowledge integration helped prepare me for being curious.”

Kee, a historian before he was a digital humanitarian, says this multidisciplinary approach has always been around, but now we have the technology to use it—and use it in ways that counter modern problems, such as terrorism and climate change. “What’s happened with the Internet,” he says, “is we’re just so much more connected now.

“We’re creating different kinds of media, and those media require that we work with people who are different from us.”